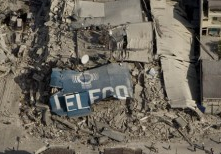 Fourcand, the president of Miami-based Fourcand Enterprises Inc., admitted to channeling bribes between the U.S. companies and officials in Haiti’s state owned telecommunications company, Haiti Teleco, according to a DOJ news release. While the release did not name the American businesses, Telecom Consulting Services Corp. is known to be one of the companies.

In December, the Justice Department unsealed the indictments of five individuals involved with the bribery scheme.

In May of last year, Juan Diaz, the president of J.D. Locator, pleaded guilty to conspiracy to violate the FCPA and money laundering in relation to the scheme.

In the scheme, Diaz and Fourcand served as intermediaries, shuttling the bribes between the Americans — Esquenazi and Rodriguez — and the Haitian officials — Duperval and Antoine.

According to court documents, various U.S. telecommunications companies sent money to Diaz who would then disperse the funds by issuing J.D. Locator checks made payable to Fourcand Enterprises. For example, Fourcand admitted that he received a check for $18,500 on Feb. 20, 2002, drawn on J.D. Locator Service’s bank account, which he deposited into an account in the name of Fourcand Enterprises. This check contained a false invoice number to make the payment appear to be for legitimate services when in fact the money was intended for Antoine. Fourcand admitted that he used these funds to engage in a real estate transaction that benefited Antoine.

Fourcand faces up to 10 years in prison and a fine that is the greater of $250,000 or twice the value of the property involved in the transactions. The news release said Fourcand also agreed to forfeit $18,500 as part of his guilty plea.

The case is another example of increased cooperation in FCPA cases. In the release, the Justice Department thanked Haiti’s financial intelligence unit, the Unité Centrale de Renseignements Financiers (UCREF), the Bureau des Affaires Financières et Economiques (BAFE), which is a specialized component of the Haitian National Police, and the Ministry of Justice and Public Security.