PORT-AU-PRINCE, HAITI — For a once-notorious dictator facing charges of crimes against humanity, Jean-Claude “Baby Doc” Duvalier is living a nice life here after his sudden return from exile a year ago.

Although technically under house arrest, the former “president for life” dines with his many admirers at the chic bistros of Petionville, where he can be found at Quartier Latin, having his poulet creole. His faltering health has improved enough for a little red wine.

His portrait, a very flattering one, is sold on the streets.

If money can be laundered, so can dictators. Duvalier was the commencement speaker last month at the law school in Gonaives, an appearance that the university’s president called “totally inconceivable.”

Last week, Duvalier drove himself — with a police escort — to the government’s memorial ceremony to mark the second anniversary of Haiti’s cataclysmic earthquake. The audience, which included Haiti’s President Michel Martelly, his prime minister and former president Bill Clinton, rose to greet him. 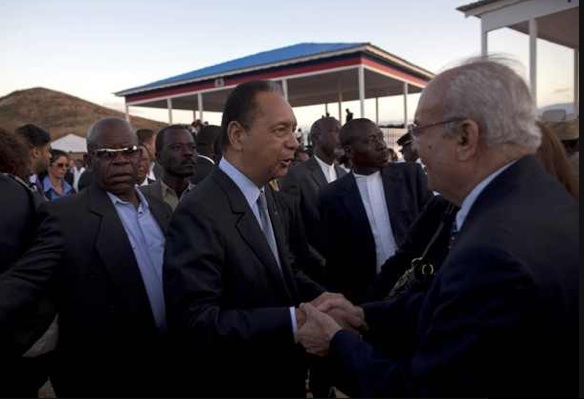 Duvalier is back in Haiti, and it is very possible that he will never be tried for the crimes that his alleged victims and international human rights groups claim — forced disappearances, illegal detentions, intimidation, torture, and executions of journalists, activists, political opponents and others.

“I cannot believe my eyes,” said Boby Duval, who spent nine months in the mid-1970s in Fort Dimanche, one of three prisons known as “the triangle of death” during the long reign of the Duvalier family — father and son, Papa Doc and Baby Doc — and the Tontons Macoutes, their paramilitary enforcers and secret police.

Duval, a bear of a man who now runs a popular soccer academy for thousands of kids from the slums, entered the prison as a robust young athlete. He emerged weighing 100 pounds. “They didn’t kill you in Fort Dimanche,” he said. “They starved you to death. I watched people die of starvation. And you never knew, ‘When am I next?’ ”

Soon after Duvalier returned to Port-au-Prince in January 2011, after a 25-year exile in France, three cases were filed against him, alleging embezzlement of funds, human rights violations and crimes against humanity.

Although an older generation in Haiti recalls with a shudder the bad things that happened in the Duvalier years, many Haitians are nostalgic for the era, when the country was more prosperous, tourists were not afraid to come and Haiti was the world’s leading maker of baseballs.

More than 60 percent of the Haitian population is younger than 25, so they have no memory of Baby Doc’s reign, only stories of better days.

A life in power

Duvalier was a plump and pampered young man of 19 when he became “president for life” in 1971 after the death of his father, the far more ruthless Francois “Papa Doc” Duvalier, who once worked as a physician.

The younger Duvalier and his then-wife, Michele Bennett, were famous for their luxurious lifestyle and shopping sprees. After the couple divorced in 1993, Duvalier endured a more modest exile, without the Ferrari or the mansion, living in a borrowed apartment, saying he was broke.

After months of delay in which three prosecutors came and went, his case is now before Judge Jean Carves, who has promised lawyers that he will soon rule on whether the matter will proceed to trial.

“He will be cleared of all charges. It is almost finished now; the judge is typing up the order to throw it all out,” said Duvalier’s attorney, Reynold Georges, who calls himself the Johnnie Cochran of Haiti, favors wide pinstripes, drives a cherry-red Mercedes and keeps an office decorated by painted nudes.

Georges said the events alleged — torture, disappearances — have exceeded the statute of limitations. “Plus, they have no proof of anything,” he said in an interview.

Asked whether the rumors are true that Duvalier, now 60, is planning a return to politics, Georges said, “If he decides to run for president, he will be eligible, and if he runs, he will win, and I will support him.”

“Was Jean-Claude Duvalier scary?” the lawyer asked. “Not Duvalier. But yes, the people around him, secret police, yes, some of them were very scary. But Jean-Claude is a nice guy, believe me.” 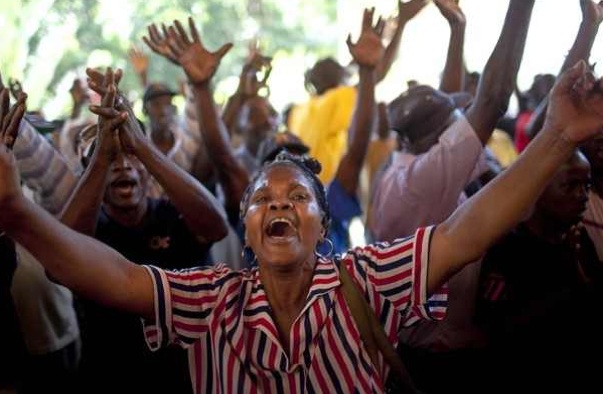 ‘It is part of the past’

Reed Brody of the group Human Rights Watch said the statute of limitations does not apply in this case. “Haiti has ratified treaties that obligate it to investigate grave violations of human rights,” he said. “There are 30-year-old cases going forward in Cambodia, Chile, Argentina, Peru, Uruguay.”

Brody said that, in the cases of the disappeared, the crimes continue, since no one knows what happened to the victims.

Attorneys for the plaintiffs say that Duvalier should be held accountable for acts he either ordered or failed to stop, and that, as the commander in chief and supreme leader of Haiti, he was an accomplice to crimes committed by his government. They say Haiti must break with its history of impunity if true democracy is to flower.

“We have witnesses now from when my clients were beaten and tortured, witnesses who saw them being beaten and arrested, who saw what happened in the prisons,” said Mario Joseph, a lawyer who filed one of the cases.

But the lawyers pursuing Duvalier say that the international community, with the exception of Canada, has been mostly silent on the prosecution — and that the new government of Haiti is against it.

Asked about the Duvalier case, President Martelly told The Washington Post: “It is part of the past. We need to learn our lessons and move forward.

“It is time to unite the country, show tolerance, show compassion, show love for everyone,” Martelly said, “to reconcile the factions that have been at war, because the war we’ve been having in Haiti is among us.” 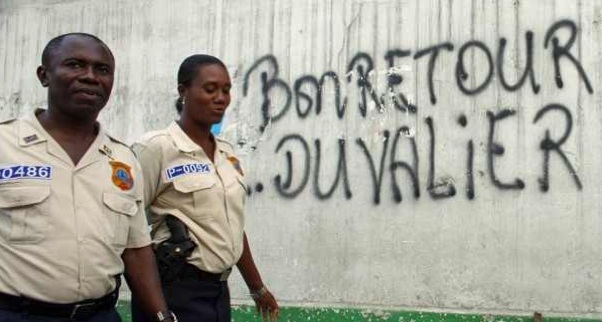 Ties to a dictator

Martelly’s government includes many officials with ties to Duvalier’s government, including Prime Minister Garry Conille, whose father, Serge, served as minister of sports and youth for the dictatorship. But in Haiti’s tiny political class, many families have a connection to the Duvaliers. Before becoming prime minister, Conille served with Bill Clinton on the Interim Haiti Recovery Commission and worked as a development manager for the United Nations.

The Duvalier affair is also complicated by the recent return from exile of another former president, Jean-Bertrand Aristide. Duvalier’s supporters say that if he is dragged into court to answer for past sins, so too should Aristide.

Bernard Diederich, an authority on the Duvalier regime and the author of “Papa Doc & the Tontons Macoutes, said Duvalier “certainly should stand trial and let justice decide whether he is guilty of stealing hundreds of millions and for the killings during his reign, especially those who died in Fort Dimanche.”

“But as Haiti is the land of impunity,” Diederich said, “don’t expect justice.”