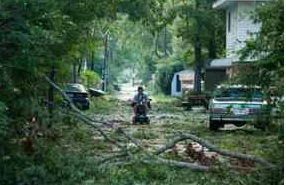 Despite an unprecedented early spring heat-wave that helped break records across the country last week, it’s the warming waters halfway across the world that have the attention of scientists and storm chasers as they begin the annual National Hurricane Convention this week in Orlando.

That warmth in the waters of the Equatorial eastern Pacific may signal the anticipated end of the current La Nina event, which has helped trigger higher-than-normal storms traffic across the tropics during the past few Hurricane Seasons. Last year, a total of 19 tropical storms were tracked during the June 1-November 30 period. This tied 2011 for third busiest of all time (along with 1887, 1996 and 2010). Of that, seven became Hurricanes and four reached “major” status. In a typical year, 11 storms are named, with six becoming hurricanes and two major hurricanes.

The strongest hurricane was Ophelia, which maxed out at 140-mph sustained winds.

There were three tropical cyclone landfalls in 2011– which is typical. However, Hurricane Irene stood above the rest — reminding residents along the East Coast of the United States that it takes only one storm to make it a memorable hurricane season. On Aug. 27, it became the first hurricane to make landfall in the U.S. mainland since Ike in 2008.

The slow-moving, rain-intensive storm was responsible for widespread flooding, 56 fatalities and more than $10 billion in damage, with homes, bridges and roads still in the process of being rebuilt from North Carolina to New England even as the 2012 hurricane season is set to start. Extensive damage also occurred in the Bahamas.

This year could be a different story though… at least according to noted forecasters Philip Klotzbach and William Gray of Colorado State University.

“A warming tropical Pacific and a cooling tropical Atlantic are leading us to think that the 2012 Atlantic hurricane season will have less activity,” the meteorologists mentioned in their preliminary pre-season prediction.

“The tropical Atlantic has anomalously cooled over the past several months,” according to their on-line report. “And it appears that the chances of an El Nino event this summer and fall are relatively high,” the forecasters concluded.

As the Orlando conference kicks off, emergency managers and disaster experts will assess response of past events, train in techniques for deploying resources and communicating in emergency situations.

I’ll be visiting the convention, and bring you continuing coverage this week on ABC Action News.

This article originally appeared in WFTS