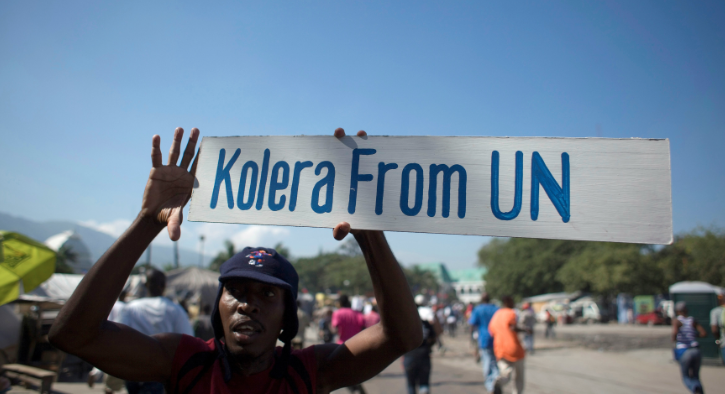 Haiti has been grappling with a devastating cholera epidemic for six years. The outbreak began in 2010, nine months after the small Caribbean island of 10 million was hit by an earthquake that leveled much of the capital, Port-au-Prince, and killed as many as 300,000 people.

The unfortunate timing, and the fact that Haiti is the poorest country in the Western hemisphere, has made the epidemic particularly bad. Most of the island lacks an adequate sanitation system and many people don’t have access to clean drinking water. To make things worse, Haiti is in the path of many tropical storms, which cause flooding and destruction that only help waterborne diseases like cholera spread.

Earlier this month, Hurricane Matthew hit the southwest part of the island, destroying cholera treatment facilities and water-distribution systems. And hundreds of new suspected cholera cases have been reported in the areas hit by the storm. The World Health Organization is sending one million cholera vaccines to the island but that’s not enough. Cholera causes severe diarrhea and can kill within hours if it’s not treated. The disease has already killed almost 10,000 people and made about 700,000 ill.

Even before Hurricane Matthew hit, the number of cholera cases were on the rise in Haiti. That’s why this summer, the United Nations chose the British physician David Nabarro, who had coordinated the UN’s ebola response, to lead the agency’s response to the cholera epidemic. The UN is in a bind: in August of this year, the Secretary General Ban Ki-moon admitted that UN peacekeepers unintentionally introduced cholera in Haiti when they dumped infected sewage into a river.

The UN has not legally accepted responsibility for the cholera outbreak, but Ban said the UN has a “moral responsibility” to help victims and their families. With the epidemic expected to get worse, The Verge spoke with Nabarro about the situation in Haiti, the UN’s plan to amend its mistakes, and what it will take to regain public trust.

This interview has been edited for clarity and length.

What is the cholera situation in Haiti right now?

“We’re very concerned about the risk of cholera at this time.”

Until about the beginning of October, I felt like we were once again getting on top of the situation, but then we had this Hurricane Matthew on October the 4th and that led once again to big risk of increased cholera because it affected the water table. It meant that there was much more contamination of drinking water with human feces and also there was much more opportunity for people with cholera perhaps to travel from the center of the country to the southwest and lead to increased incidence.

We can’t be very precise about how bad it is because the Hurricane has caused us terrible damage that we don’t have a complete information base from all parts of the southwest affected area. But we’re very concerned about the risk of cholera at this time and that’s why we put public health, and particularly prevention of waterborne diseases, right at the center of our response strategy for the hurricane.

On Monday, the UN announced that it is looking to raise $200 million to compensate the families of people who have died from cholera in Haiti. Can you tell me more about this effort?

What I’ve actually tried to do is to establish a structure for the cholera response which has two distinct but linked tracks to it. Track one is responding to the cholera with the emergency response teams and other measures including chlorination of domestic water supplies. And then second track, which is trying to find a way to support people whose lives have been affected by the cholera outbreak.

There is a possibility that that support would involve cash to the families of people who have died, but there’s also the possibility that support might involve some kind of assistance to communities that have been affected by cholera. We promised that we will consult with the Haitian people to work out what kinds of assistance might suit their needs best but we’ve also said that we don’t want to be planning this assistance before we’ve got the promise of money, because there’s nothing worse than going to a community that’s already been badly hurt and trying to help them when we don’t know that we’ve got the money.

Cash to the families of people who have died

So my announcement is about this first track of money to deal with cholera, that we altogether are seeking $200 million — about $40 million for the rapid response to cholera and then about $160 million for the medium-term effort to improve water and sanitation on the island. Then there’s a second $200 million that we would like to raise for the people who’ve been affected and we’re trying to get a proportion of that before we complete our consultations with the people on which kind of support they would find most helpful. And we would like to get these consultations complete by November so that the Secretary General [Ban Ki-moon] can announce what he would like to provide in the way of support well before he leaves office.

Is the UN going to invest in plumbing and sanitation as penance for the disease it introduced?

We are not going to be able to provide the resources required for sanitation of the whole of Haiti to get it up to the standards that it’s appropriate, because only 25 percent of people in Haiti have got proper lavatories and actually only 50 percent have got access to drinking water. But on the other hand, what we do plan to do is to work with a number of partners who already quite active on water and sanitation. These include the Inter-American Development Bank, the World Bank. Other partners include a number of governments like the United States and Spain and also there’s some private sector groups who would like to be involved in water and sanitation.

“It might take until 2030 to get everybody in Haiti having a properly functioning lavatory.”

It needs to be quite a long-term approach because, as you’re implying, plumbing is not straightforward and we’re anticipating that it might take until 2030 to get everybody in Haiti having a properly functioning lavatory and of course water supplies that you need if your lavatory is going to work.

The UN admitted to introducing the disease in 2010. What is the UN doing to regain public trust, both internationally and in Haiti?

I think that the purpose of the work that the Deputy Secretary General [Jan Eliasson] and the Secretary General have asked us to do is very much to seek to rebuild a relationship of trust and to cope with the fact that there is a level of dissatisfaction on our side as well as on the Haitian side with the current situation. And that’s why we’re adopting this new approach with its focus on trying to get on top of the cholera, on longer-term water and sanitation, and on support to the people whose lives have been affected. The Secretary General has indicated that we have a profound moral responsibility in this regard, he’s indicated very high level of regret for what’s happened, and he’s indicated that he’s going to stop at nothing to find the way to mobilize the resources for what I’ve described.

“We can’t do what we want to do without financial resources.”

The difficulty that we’re having in the United Nations is that we don’t have big cash reserves to deal with unexpected difficulties and that’s why we have to go to our member states to ask them to give us the funding that we need for what we need to do. And that’s very much what my job is: number one is to be working with Haitians and with partners of the design of what it is you want to do, and the second is go and try to mobilize the money. It is my personal belief that this is what we in the United Nations absolutely have to do and that’s why I’m doing it, as I’m also being asked by the Secretary General to spare absolutely no effort to get it done. But unfortunately, we can’t do what we want to do without financial resources from our membership.

Haitians wash clothes in a stream in Port-au-Prince in 2011. Photo by Mario Tama/Getty Images

So do you think you’ll be able to regain public trust?

Well, public trust comes from showing that you are committed to do nothing but bring good to the people you’re trying to help. The United Nations has always been committed to trying to help the people of Haiti. Whatever has happened in the past was not in any way intended, it was a thing that happened as a result of good intentions by all the different people in the United Nations who were seeking to bring help to the people of Haiti. And whenever I talk to people in Haiti, they are clear to me that they understand this force of that kind of relationship. So what I can tell you is that all my discussions in my two visits in Haiti have suggested to me that people very much understand what we’re trying to do and they very much hope that we’re successful.

Does the UN plan on investing on cholera vaccines?

There are five elements to dealing with in a cholera outbreak. Number one is rapid response to people who’ve got the disease. Number two is treating them really well with fluids and antibiotics. Number three is making sure that there is chlorine in their drinking water to kill whatever bacteria there might be in there. Number four is providing really good information so that they know what it is that they need in order to be able to prevent themselves from getting sick. Number five is vaccination with oral cholera vaccine. The new potent vaccine has 65 percent efficacy. All these elements is what we plan to put in place. Obviously again we need to raise the money but there is real new hope that we can access the number of doses of cholera vaccines that are needed and that is a key part of the strategy.

“There is real new hope.”

With climate change, diseases like cholera and Zika will only spread more and hurricanes will happen more often or with more intensity. Is the UN taking this into account in its plant to help Haiti in the years to come?

Definitely. I mean, climate leads more frequent bad weather. Climate leads to bad El Niños like this year, which was then followed by very heavy rain. Climate change leads to rise in sea water levels. Climate change leads to increases in disease. There is a big and direct relationship between climate change and illness. We’re so involved in this. Because I’m working with the Secretary General on sustainable development, on climate, on health, and on food. I am very much in this phase where all I’m focusing on frankly is trying to make sure that countries have greater resilience in the face of these primate threats.

How will you make Haiti more resilient?

Well, that’s entirely what we’re working on with the government of the people of Haiti. It costs money. The people of Haiti are fantastic resilient people anyway, but they are very short of cash and that’s my job. I have to try to make sure they have the resources they need to be more resilient in the face of all these threats.