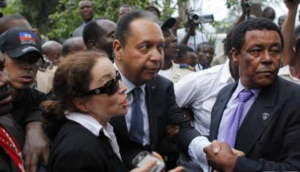 (Reuters) – Former Haitian dictator Jean Claude “Baby Doc” Duvalier will face trial for corruption during his 15-year rule, but not for human rights abuses, the judge handling the case said on Monday.

A 20-page ruling on the charges was delivered to the government prosecutor’s office on Monday, Carves Jean, the judge responsible for investigating the case, told Reuters.

It does not include charges for the murders, disappearances, torture and other rights abuses allegedly committed during Duvalier’s rule, Jean said.

“I did not find enough legal grounds to keep human rights charges and crimes against humanity against him,” he said. “Now my job is over. The case is no longer in my hands.”

Duvalier would face up to five years in prison if convicted on the corruption charges. No trial date had yet been set.

Duvalier inherited power from his father, Francois ‘Papa Doc’ Duvalier in 1971 and ruled Haiti for 15 years until his overthrow in 1986. Under the father-and-son dictatorship, thousands of people were murdered, or were tortured in jails, such as the dreaded Fort Dimanche.

Duvalier, now 60, made a surprise return to his earthquake-stricken homeland in January last year after nearly 25 years exiled in France, opening himself up to possible prosecution.

While the ruling is a setback for human rights victims and advocates, it also marks a victory for those seeking punishment for Duvalier’s alleged crimes who had feared that the judge would drop all charges. It would also appear to squash any hopes of a political comeback by the former dictator – at least for the time being – as his lawyers battle with the legal challenge.

One of his lawyers said Duvalier would appeal the decision to send him to trial.

Duvalier is alleged to have embezzled between $300 million and $800 million of assets during his presidency.

The Swiss government has sought to confiscate assets valued at 5.8 million Swiss francs ($6.7 million). It wants to return the funds to Haiti, which is the poorest country in the Americas and is struggling to recover from a devastating earthquake in 2010 which killed more than 200,000 people.

Government officials could not be reached to comment on the ruling, but it is likely to be challenged by Duvalier’s alleged victims, of whom at least 19 have filed complaints with the government prosecutor.

Last week, President Michel Martelly was quoted as favouring a pardon for Duvalier though he later retracted his remarks.

Victims of Duvalier’s armed forces and the notorious National Security Volunteer Militia, better known as the Tonton Macoutes, sought to have their claims included in the official case against Duvalier. But the government prosecutor’s office did not include them in its recommendations to the judge as the alleged abuses fell outside the statute of limitations stipulated in Haiti’s constitution, according to a senior judicial official.

The government prosecutor also recommended dropping the corruption charges, the official said, but the judge decided to let them stand.

“Those other human rights charges were not part of the request I sent to the investigative judge,” confirmed Felix Leger, a former prosecutor who prepared the recommendation that was sent to the judge. “We also received other complaints from other people … but those complaints arrived too late.”

Reynold Georges, a lawyer for Duvalier, said the former dictator would appeal any decision to put him on trial for financial crimes, arguing that the Supreme Court has already cleared him of such charges following a previous investigation.

U.N. officials and rights groups have urged Haiti to put Duvalier and senior officials on trial for atrocities committed under his rule, saying that under international law, the statute of limitations does not apply to crimes against humanity.

“The thousands of Haitians who suffered under this regime deserve justice.” U.N. High Commissioner for Human Rights Navi Pillay has said.

The judge’s ruling will be challenged by lawyers for the victims, said Mario Joseph, who heads the Bureau of International Lawyers in Haiti. “The judge cannot decide only on the financial crimes committed by Duvalier. He should also be tried and sentenced for rapes, torture, disappearances, assassinations and crimes against humanity his regime has been responsible for,” he said.

Reed Brody, a lawyer with Human Rights Watch who has worked with the victims in the case, said that if they exhaust their appeal options in the Haitian system, they could take the Haitian state to the Inter-American Court of Human Rights.

The body that refers cases to the Inter-American Court, the Inter-American Commission on Human Rights, has already issued a statement on the Duvalier case. In a ruling in May last year, it said Haiti must “investigate the serious violations of human rights that were committed in the period from 1971 to 1986, to prosecute and punish those responsible and to make reparations to the victims.”

When Duvalier returned to Haiti on January 16 last year, he was met by a crowd of cheering supporters. He was briefly detained and charged with corruption, theft and abuses of power allegedly committed during his rule and was then freed on the condition he not leave the capital without authorization.

Since then, Duvalier dines frequently in some of the city’s finest restaurants, accompanied by former members of his regime. He has also made unauthorized visits outside the capital.

In January, he even managed a handshake with an unsuspecting former U.S. President Bill Clinton at an event outside the capital to mark the second anniversary of the 2010 earthquake. That earned him a rebuke from the judge who warned him not to violate his court-ordered restriction of movement, or risk being jailed.

1 thought on “Haiti’s Duvalier faces trial for corruption, not abuses”