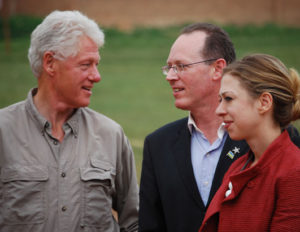 Dr. Paul Farmer, the charismatic founder of Boston-based Partners in Health, told Congress today the path to recovery in earthquake-shattered Haiti must be charted by that nation’s government and not by outside aid agencies, no matter how well-intentioned.

Farmer, who first began working in rural Haiti nearly three decades ago, has long championed the strengthening of the Caribbean nation’s government, arguing that is the best hope for bolstering tattered health, education, and social service systems. Too often, Farmer argued, proliferating aid agencies and foreign nations have failed to establish enduring partnerships with Haiti’s government.

“Our historical failure to do so is one of the primary reasons that trying to help the public sector now is like trying to transfuse whole blood through a small-gauge needle or, in popular parlance, to drink from a fire hose,” Farmer, a UN deputy special envoy for Haiti, said on Capitol Hill.

“How can there be public health and public education without a stronger government at the national and local levels?” Farmer said in prepared remarks.

Farmer testified before the Congressional Black Caucus alongside Loune Viaud, director of operations and strategic planning for Zanmi Lasante, the Haitian sister organization of Partners in Health. They sketched portraits of a nation whose needs remain acute six months after the earthquake that sundered much of the capital city, Port-au-Prince, and laid waste to nearly all federal government buildings.

Partners in Health, which has expanded to Peru, Russia, Rwanda, and beyond, assumed a leading role in the days after the Jan. 12 earthquake in helping provide services and in partnering with the Haitian health ministry. The Partners in Health model empowers local doctors, nurses, and residents; in Haiti, virtually all of the 4,000 staff members are Haitian.

“We need Haitians to lead the reconstruction efforts,” Viaud said. “This means supporting the capacity and the leadership of both the Haitian government and Haitian communities; it means deferring to the experiences of Haitians and guaranteeing our participation in the rebuilding of our country.”

But that has not happened sufficiently since the earthquake, Farmer said. He cited UN figures showing that while $1.8 billion in earthquake relief has flowed into Haiti, less than 3 percent has gone to the government.

He is a guy who blindly took Aristide’s money and preached an Aristide line when this damaged the nation.

Now he is suggesting a stronger government, which is a nice idea. However, what do you do when the president does not want to govern and will not let his cabinet or parliament govern??

He is also upset that the Preval government has only received a couple of percent of the money pumped into Haiti. This shows he is totally disconnected with reality. People do not want to give more than a token sum to Preval, and his criminal government, since they know it will be stolen.

Wake up and smell the flowers Farmer.

You have been involved with Haiti for years, yet you are, in fact uninvolved, otherwise you would not suggest the criminal concept of giving Preval any cash.