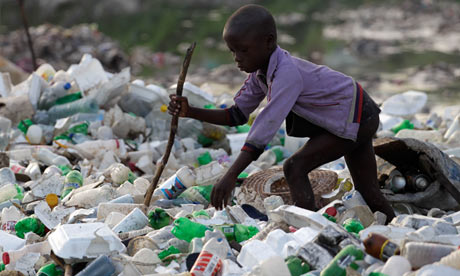 A boy searches through plastic rubbish in a sewage canal for items to sell in Port-au-Prince, Haiti. Photograph: Brennan Linsley/AP

id=”article-body-blocks”>Police in Haiti have raided three warehouses in the capital in the first clear indication that the government is serious about enforcing a ban on Styrofoam takeaway containers and plastic bags.

The ban, which came into force on 1 August, is the second time that Michel Martelly’s government has tried to limit the plastic rubbish that clogs drains and causes floods, litters the streets and washes up on beaches. A previous attempt last year was largely ignored, and environmental activists fear the government may not be able to enforce it this time either.

But the environment minister, Jean Francois Thomas, said the raid proved “we are serious about a serious problem”. The government has promised many more across the country, mainly to seize Styrofoam containers, 80% of which are imported from the neighbouring Dominican Republic.

Haiti is engaged in a trade war with the DR, having banned the importation of chickens and eggs, and some DR Styrofoam manufacturers say the ban on plastics may be a political move.

“We’re not yet sure what we’ll use instead of plastic bags,” said one Port au Prince supermarket owner. “Perhaps recycled plastic? But it’s more expensive.”

Port-au-Prince, Haiti’s largest city, is awash in rubbish. When it rains, rivers of discarded Styrofoam boxes flow down the streets and plastic bags festoon trees.

There is general scepticism about the government’s ability to enforce its decision. “There is little reason to think the new decree will bring about any change, What is the alternative to Styrofoam and plastic? How are people going to carry food home if not in Styrofoam boxes?” asked one business owner.

Thomas insists that his government is determined to wean Haitians off the “bad habit” built up over the last few years of using Styrofoam.

The government says it is still in the process of talking to Haitian business owners to import biodegradable takeaway containers and bags. “We will offer a lot of help, such as lower import tariffs for biodegradable products,” said Thomas.

In the past, he said, “Haitians bought food and brought along their own metal containers to take it home. What’s wrong with doing that again?”

The question may address the doubts posed by environmental campaigners who point to Haiti’s failure to follow the example of Rwanda, which launched a four-year public information campaign before it became the first country in the world to ban bags in 2007.But activists say the action is too little, too late.

The government says it has more ambitious plans than mere bans. Small plastic sachets of purified water remain exempt from the ban and Thomas believes he is creating a scheme for drivers of tap taps, the privately owned public transport system, to collect discarded sachets and take them to a recycling plant. “Everyone earns a little and the streets remain clean, what could be better than that?”


COMMENT: HAITIAN-TRUTH.ORG
Great idea if there is some sort of replacement for the packaging.

So far there is none.