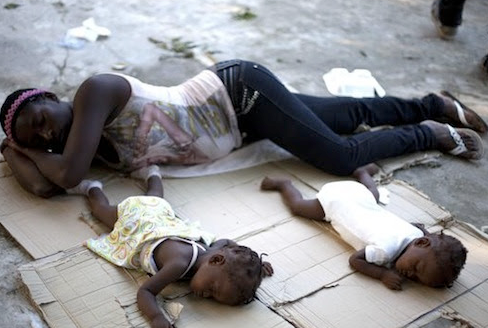 Forced out of the Dominican Republic, Anise Germain and her family pitched a flimsy tent of blankets and cardboard on a patch of rocky ground just across the border in Haiti. She feared they might never leave the camp.

Ten months later, things are looking up. Germain, her husband and three children have been relocated to a cinderblock shack in the nearby Haitian border town of Anse-a-Pitres. They lack running water and electricity, but they are no longer in a forlorn camp of Haitians and people of Haitian descent who have fled or were expelled in a Dominican crackdown on migrants.

“I think life will be better for us here,” Germain said as she watched her youngest daughters play in the backyard with several banana and papaya trees and enough space for a small vegetable plot.

Their move comes amid efforts to cope with an influx of people from across the border setting up tent camps similar to those that aid groups and the government spent years trying to clear out after Haiti’s devastating 2010 earthquake.

Within the next month, authorities hope to move nearly 2,400 people out of six encampments by providing subsidies for them to rent homes for a year in southeastern Haiti. The International Organization for Migration is coordinating the effort with $2 million from a U.N. emergency fund.

“We’re seeing that they move to houses for a year to give them enough time to identify economic opportunities so they can support themselves,” said Fabien Sambussy, the IOM’s operations chief in Haiti.

The border camps, with clusters of makeshift shacks that bake in the sun and flood when it rains, are filled with destitute migrants who often speak a mix of Haitian Creole and Spanish. More than half are children, and health authorities feared that a growing number of cholera cases would turn into a more widespread outbreak.

The camps emerged on the outskirts of Anse-a-Pitres last June as increasing numbers of people left the Dominican Republic. A few thousand people found nowhere to go in Haiti, often because they had been gone so long they didn’t have the social connections needed to survive on the poorer side of the island of Hispaniola.

Germain, 32 and pregnant, fit that category. Her parents went to the Dominican Republic to work in farming when she was 6. The family settled in a shantytown near La Ceiba.

Her parents, who have since died, never got legal residency for their children.

The Dominican Republic, which has long had an uneasy relationship with its much poorer neighbor, has become much less hospitable to its migrants.

Over the last several years, Dominican authorities have begun trying to bolster the largely porous border with Haiti, increasing security at the main crossing points and deporting people who can’t prove legal residency.

In September 2013, the Dominican constitutional court issued a much-debated ruling that children born in the country to non-citizens did not qualify for automatic citizenship because their migrant parents were “in transit.” The decision was retroactive, rendering people who thought they had legal status effectively stateless.

With its migrant policies under international criticism, the Dominican government created a program that allowed people born in Haiti to qualify for legal residency if they could get the necessary paperwork proving they had been in the Dominican Republic since before October 2011.

Many people couldn’t meet the requirements and moved on their own, fearing a crackdown. The International Organization for Migration says at least 78,000 people have left the Dominican Republic for Haiti. The Dominican government puts the number at 129,000.

“I only brought my family into Haiti because I was afraid we’d be killed,” said Inez Celestin, one of many who believe they have a right to Dominican residency but chose to abandon the country instead.

Most people living in the refugee camps clustered around Anse-a-Pitres are eager to leave, although many in one remote camp known as “Water Head” hope to stay. Conditions there are considerably better, with residents living in thatched huts along a small river.

Still, people are leery of the relocation effort. They want to know what they will do when the rental subsidies run out in a year.

Amnesty International researcher Chiara Ligouri said the group is concerned that the relocation solution “might not be durable” without additional help.

Sambussy, however, noted that aid agencies must do the best they can with what they have. “At the end of the day, we have to be pragmatic because the limited funding we received can only support relocation.”

In recent years, both the Haitian government and humanitarian groups extensively used the one-year rental subsidies to close tent camps filled with people displaced by the 2010 earthquake.

Germain said she hopes to find a way to support her family in their new life in Haiti, where steady jobs are few.

Her voice still shakes with indignation when she describes being told in the Dominican Republic that had to leave the country because she didn’t have residency papers. She was detained by police as she sought medical care for her feverish youngsters.

“I told the Dominican police I had lived here since I was six but they didn’t listen,” she said.

Authorities dropped Germain and her sick kids off at the Anse-a-Pitres border crossing. Her husband and eldest daughter later joined them at the dismal camp.

“We’ve been set back but we are trying to get back on our feet,” Germain said, standing by a pile of her family’s only possessions: plastic buckets, tin cups and pots.