SANTO DOMINGO, Dominican Republic — For generations, people of Haitian descent have been an inextricable part of life here, often looked at with suspicion and dismay, but largely relied on all the same to clean rooms, build things cheaply and provide the backbreaking labor needed on the country’s vast sugar plantations.

Now, intensifying a long and furious debate over their place in this society, the nation’s top court has declared that the children of undocumented Haitian migrants — even those born on Dominican soil decades ago — are no longer entitled to citizenship, throwing into doubt the status of tens of thousands of people here who have never known any other national identity.

“I am Dominican,” said Ana María Belique, 27, who was born in the Dominican Republic and has never lived anywhere else, but has been unable to register for college or renew her passport because her birth certificate was no longer accepted. “I don’t know Haiti. I don’t have family or friends there. This is my home.” 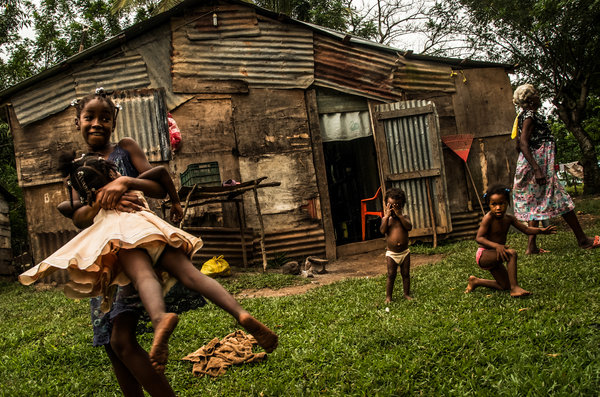 Children born in the Dominican Republic to Haitian parents, whose citizenship is affected after a ruling of the nation’s top court. Credit Meridith Kohut for The New York Times

In a broad order that has reverberated across the hemisphere, the court has instructed the authorities here to audit all of the nation’s birth records back to June 1929 to determine who no longer qualifies for citizenship, setting off international alarm.

The United Nations high commissioner for refugees warned that the decision “may deprive tens of thousands of people of nationality,” while the regional alliance of Caribbean nations, which the Dominican Republic has sought to join, condemned how masses of people are “being plunged into a constitutional, legal and administrative vacuum.”

“It is remarkably sweeping in terms of numbers: over 200,000 made stateless — a staggering figure,” said Laura Bingham, who tracks citizenship issues for the Open Society Justice Initiative. She and other legal experts called it one of the more sweeping rulings denying nationality in recent years.

To some extent, the ruling, issued Sept. 23, and the intensity of emotions around it carry echoes of the immigration debate in the United States and other countries, with wide disagreement on how to treat migrant workers and their children.

But given the history of the Dominican Republic and Haiti — a sometimes cooperative, often tense and occasionally violent relationship between two nations sharing one island — the decision has brought to the surface a unique set of racial tensions and resentment toward the waves of impoverished Haitian migrants that fill menial jobs on this side of the border.

An estimated 200,000 people born in this country have Haitian parents, according to the last census, by far the largest immigrant group here and thus the one most widely affected by the ruling. Haitian immigrants occupy the lowest rungs of society here, and have for generations, living in urban slums or squalid sugar plantation camps where wage abuse remains common, as a United States Department of Labor report found last month.

For decades, Haitians, housed in remote shantytowns known as bateys, were brought over on contracts for sugar plantations to cut cane under the blistering sun. Many still labor in the fields, while others work as maids, construction workers and in other low-paying jobs.

Many Haitians proudly embrace the slave rebellion that led to Haiti’s founding as a nation. But Dominicans, although they rushed aid to Haiti after its devastating 2010 quake and maintain many cultural and social exchanges, historically have viewed their neighbors with qualms, identifying more with their nation’s Spanish colonial past and, despite their own racially mixed heritage, often deriding anyone with dark skin as “Haitian.”

“The Dominican Republic is at a crossroads right now over the question, ‘What does it mean to be Dominican in the 21st century?’ ” said Edward Paulino, a historian at John Jay College who has studied the relationship between the two countries. “It is a country of immigrants, but no other group is like the Haitians, which arrived with the cultural baggage of a history of black pride in a country that chose to identify with the European elite.”

Top officials in the government met on Wednesday to determine how to carry out the ruling, which cannot be appealed. In the meantime, the migration director, José R. Taveras, said that people in limbo would be issued temporary residency permits while the country comes up with a plan to grant them some form of immigrant status. But to many people, that means losing the benefits of citizenship, which beyond basics like voting also allows for lower tuition at state colleges and public health insurance for low-income citizens.

Although Haiti technically bestows citizenship on the children of its nationals, the process can be full of bureaucratic entanglements and slowed by missing or incomplete records, let alone the fact that few of the children of migrants here consider themselves anything but Dominican.

The battle has been in the making for years. People born on Dominican soil, with some exceptions, generally were granted citizenship for generations. But people of Haitian descent often complained of discriminatory practices when getting official documents, and in recent decades the country’s civil registry officials often excluded the children of migrants whose papers were in question by considering their parents “in transit.”

The Inter-American Court of Human Rights in 2005 denounced the practice as a way of discriminating against people who had been in the country for a lifetime. Still, the Dominican Republic enshrined the rule in 2010 by a constitutional amendment that excludes the Dominican-born children of those in the country illegally, including seasonal and temporary workers, from Dominican citizenship. The new court decision not only ratifies the change, but also goes a step further by ordering officials to audit the nation’s birth records, compile a list of people who should not qualify for citizenship and notify embassies when a person’s nationality is in question.

Legal experts, as well as two dissenting judges on the constitutional court, called it a violation of legal principles to retroactively apply the standard of citizenship established in the 2010 Constitution. “As a consequence of this restrictive interpretation and its retroactive application, this ruling declares the plaintiff as a foreigner in the country where she was born,” wrote one of the dissenting judges, Isabel Bonilla.

The case arose from Juliana Deguis, a 29-year-old woman born in the Dominican Republic to Haitian migrants and working as a maid. She sought her national identity card, using her Dominican birth certificate, but was rejected because the document indicated that her parents were Haitian migrants, not legal residents. Legal advocates for Haitian migrants and their children took the case to court, arguing that Ms. Deguis’s parents were residents because they had been contracted to work on a sugar plantation and never returned to Haiti, but the court ruled that they were “in transit.”

That came as a surprise to Ms. Deguis, her family and her neighbors, who have scratched out a living for decades in a remote village populated by former sugar-cane workers. Ms. Deguis has never been to Haiti, only knows a few words of Creole and never thought of herself as anything other than Dominican. “I feel terrible because I cannot work without my ID card and without that the school may not register my children either,” she said.

Supporters of the decision, including the immigration commissioner, said it would help the government regularize people and clarify the citizenship rules. The archbishop of Santo Domingo, Cardinal Nicolás de Jesús López Rodríguez, called the ruling just and nodded to a sentiment among some Dominicans that international organizations were meddling in their affairs.

“International organizations don’t rule here,” he told reporters after the ruling was announced. “I don’t accept anybody coming here to decree anything. No country, not the United States, not France, nobody. Here, we are in charge.”

For now, Dominicans caught up in the ruling await the next steps. Ms. Deguis is not working and worries about caring for her four young children, all born in the Dominican Republic as well. “If there is now this confusion about me,” she asked, “what about them?”

COMMENT: HAITIAN-TRUTH.ORG
The whistle for this train wreck has been blowing, for some time, but no one has paid any attention.
Via his cousin, Max Bellerive, the Dominican intelligence agent, Martelly accepted his first bribe from Dominican Senator Bautista, Since then – in spite of international offers of help, Martelly has created an impossible situation in which some 300,000 people may be deported into our already wrecked economy.
Some years ago, the Dominican Republic changed its focus from sugar to tourism. This change removed the need for cheap Haitian SLAVE LABOR. Now, to rid their economy of this burden, the Dominicans have created laws under which they can “cleanse” their nation of any questionable elements, back to 1929.
This mirrors the 1937 Dominican massacre in which some 37,000 Haitians were murdered over a few days by forces of  Dominican President Trujillo.
Over 300,000 people may be dumped on the Haitian economy with no way to support them. The economy cannot support thjose who are already here and we actually have people starving to death in the northwest.
The International Community should declare the Dominican Republic a pariah
and cut off economic ties and Tourism should be boycotted.
Haiti is the DR’s biggest customer.
We should close the border to any movement, in either direction.