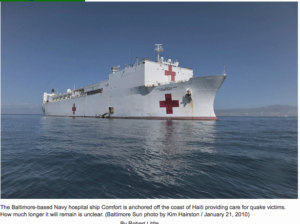 The Navy hospital ship Comfort discharged its last remaining patient last weekend and is anchored in Port-au-Prince harbor, empty but for its 993- member crew, waiting for military leaders to decide whether it still has a role in the U.S. response to January’s deadly earthquake in Haiti.

Pentagon officials won’t say what the ship’s next step is. But as signs mount that the floating medical center is preparing to leave Haiti six weeks after it arrived, so is the clamor rising from doctors on the ground in the battered country who say earthquake victims still need the Comfort’s equipment and skills.

“We haven’t figured out what the end of this looks like yet,” said Dr. Andrew N. Pollak, an orthopedic surgeon at Maryland Shock Trauma Center in Baltimore who is returning to Haiti on Friday to work at the crumbled St. Francois de Sales Hospital in the capital. “Until we do, until the capabilities improve on the ground, the Comfort is the only solution for some people.”

Dr. Randy Sherman, a University of Southern California plastic surgeon who has worked with the Navy, is pleading with officials to keep the Comfort in Haiti. “The ship provides such a special capability, fills such a big hole, that to lose it is catastrophic,” he said.

Designed as a floating emergency room for treating combat injuries, the Baltimore-based Comfort arrived Jan. 19 and quickly was overwhelmed with patients who had suffered fractures, crush injuries, infections and other consequences of the earthquake a week earlier. In a city whose medical infrastructure was slight before the disaster, it arrived as the best-equipped, most capable medical treatment facility in the country and was quickly flooded with complicated cases. Its medical staff has treated more than 1,000 Haitian patients and performed nearly 850 surgeries.

New admissions declined weeks ago as patients with untreated injuries became increasingly scarce and have nearly come to a halt in recent days as the ship continued to discharge patients to clinics and medical facilities on land. According to a Navy officer on the Comfort, the only Haitian treated on board Tuesday was a young boy who received a CT scan, then was taken ashore. During peak operations, the ship had a crew of 1,288; nearly 300 have left.

Navy officials acknowledge the diminished workload but won’t say much about the Comfort’s future.

“The ship is still there,” said Jose Ruiz, a spokesman for the Pentagon’s Southern Command, which is overseeing the military’s relief efforts in Haiti. “And it will remain there until Southcom determines that her capabilities are no longer required to support the mission.”

Privately, Navy officials say the Comfort’s workload tailed off as fewer patients with earthquake-related injuries appeared at Haiti’s ground-based clinics and triage centers seeking care. And while the ship initially accepted some patients with diseases, complicated pregnancies or other conditions unrelated to the earthquake, the Navy chose to focus on disaster relief and avoid the intractable public health issues and primary care shortcomings that troubled Haiti long before the quake.

Doctors who left the ship recently said the need for a full-service surgical center in Port-au-Prince was not always apparent from on board.

“We weren’t getting a lot of calls,” said Dr. Andrew R. Burgess, an orthopedic surgeon who returned to Florida last weekend from a volunteer tour on the Comfort. “I know people say there are a lot of patients out there that could use its services, but someone needs to do a survey and determine just who they are and where.”

Sherman, medical director for the aid organization Operation Smile, has worked at two ground clinics in Haiti since the earthquake and said any perceived shortage of patients comes from poor communications rather than the resolution of the country’s medical needs.

“There is no doubt” there are enough earthquake victims to keep the Comfort busy, he said. He has asked top Navy officials to keep the Comfort in Haiti and proposed staffing it primarily with civilian medical workers. He thinks it could operate at high volume for at least three more months.

Sherman, Pollak and others tell the same story: They say the country is replete with patients whose orthopedic injuries have healed improperly and require complex surgeries that only the Comfort can provide.

Many patients treated in the days after the earthquake had bones set with external pins in tent hospitals without X-rays, they say, and those injuries need to be reset to give the patients functional limbs.

“The problem is the second wave of these,” Sherman said. “There is this large, large subset of patients who require additional treatment, and the nature of that treatment is more complicated and highly instrumental.”

The civilian doctors say they appreciate that their viewpoint is solely a medical one, while the Navy’s decision to deploy a ship like the Comfort must consider financial, political and diplomatic issues.

“The question the government needs to answer, as unemotionally as it can, is whether it’s justified spending the millions of dollars that the ship costs to care for the number of patients who need it,” Burgess said.

The Navy did not immediately respond to a request to detail the cost of the Comfort’s mission to Haiti.