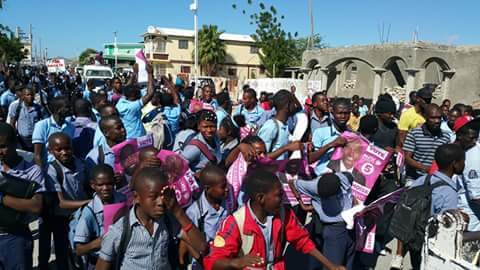 A runoff election on Sunday for president in Haiti was postponed indefinitely late last week. The decision made sense, because with protesters in the streets, violence and gunfire and the torching of electoral offices, it was clear that any vote would be marred by bloodshed and chaos.

It was also good because, with only one candidate participating, any result would be ludicrous and fraudulent.

That candidate is Jovenel Moïse, a political unknown who is the handpicked successor to President Michel Martelly, whose term is up. Mr. Moïse finished first in a first-round election in October, but that election was so tainted by accusations of rigged voting and intimidation that the runner-up, Jude Célestin, denounced the result and refused to campaign in round 2.

Mr. Célestin’s argument, echoed by other opposition politicians, church and business leaders, members of the Haitian diaspora and human rights groups, is that the country’s fragile democracy faces a crisis of legitimacy. Only by fully investigating last year’s elections — including legislative elections in August that were also the subject of violence and fraud — and reforming the voting process can the country produce a government worthy of the citizens’ trust. Earlier this month members of the Haitian Senate voted to urge that the runoff be postponed.

Mr. Martelly, naturally, disagreed, wanting to deposit his man in power before he leaves office on Feb. 7, as the Constitution requires. Late last week, as protests mounted, Mr. Martelly was still insisting that the election had to be held. He had the support of the United States, which has already spent more than $33 million on the election, the Organization of American States and other foreign governments that had been pressuring Haitian officials to proceed. Only when the threat of violence became overwhelming did Haiti’s election officials decide to call things off.

In a statement on Sunday, the State Department said, “The United States reaffirms its support for credible, transparent and secure elections that reflect the will of the Haitian people.”

Every weekday, get thought-provoking commentary from Op-Ed columnists, The Times editorial board and contributing writers from around the world.

Well, yes, that would be good. But the conditions that permit such elections do not exist in Haiti now, and are not going to suddenly emerge in the next two weeks. They have not been nurtured for the last five years by President Martelly, who displays the strongman tendencies of Haiti’s worst rulers, and who bears much responsibility for the crisis, having not called local and parliamentary elections for years. The terms of practically every elected official in the country have expired, allowing Mr. Martelly to rule by decree since January 2015.

Haiti was devastated by an earthquake six years ago this month. The rest of the world, particularly its neighbor the United States, rushed in 2010 with promises to help rebuild Haiti’s shattered buildings and institutions. The job, tragically, was left undone, complicated by an imported cholera epidemic and continuing economic suffering. Now, Haiti is on the precipice again, because of a man-made disaster of dirty elections, an unsavory president and the threat of crippling instability.

The best result would be Mr. Martelly’s departure, a brief period of transitional government and swift agreement among Haitian leaders on a program of electoral reform that enables free and fair elections. Haiti, with the support of the international community, must emerge from the crisis with a politics worthy of its people.

So long as the foreign media fail to understand the realities or continue in their desire to report on isolated chaos, ignoring widespread peace – Haiti will have no chance.

Martelly’s presidency – unlike those of Aristide and Preval, along with the Interim Government of Latortue – was a peaceful one. No one can claim he killed anyone – or had anyone killed. His Presidency – until the Aristide/Preval agitators started their game a few weeks ago.

Jude Celestin is a drug dealer, major embezzler, major thief of national materials, when he was head of the Haitian CNE. And most importantly, he was a contract killer, under Preval and Aristide. He, and the murderer Amaral Duclona – now serving a term in a French jail for the Celestin planned assassination of a French Consul – killed many for Aristide/Preval.  When the head of Haiti’s construction arm – CNE – refused to participate in a deal that saw $100,000,000 spent on “new” equipment when Haiti actually got used equipment, for $50,000,000 – with Preval, Celestin, and other sharing the loot. Celestin took over as head on CNE.

Martelly is an artist and sometimes like political polish.

But the people still love him.

Martelly could win an election tomorrow if the Constitution allowed this.

Remember 57% of the voters are younger than 26!

Jovenel Moise is unpopular because he is not a drug dealer, hasn’t killed anyone or stolen a lot of money. This makes Haiti’s business/political elite uncomfortable.

People mention his lack of political experience, while ignoring his major business success, and the fact he is from the ignored majority – HAITI’S PEASANT MASSES.

Politician, in Haiti, don’t have political experience! They have experience in corruption!

Jovenel is really popular with the vast majority of Haitians and would win any really, free-and-fair ballot.

Jude Celestin is not popular and will lose any free-and-fair election. That is why he played his game, a game that has seen the voters of Haiti cheated out of a chance to Democratically voice their desires.

It was/is plain to see that they want Jovenel Moise. After all, that is what Democracy is supposed to be about!!

Unfortunately, that isn’t the way things work in Haiti.

The following are some photos from a student protest in Gonaives – today – peacefully expressing their disgust in the way things are going and their support for the electoral process. 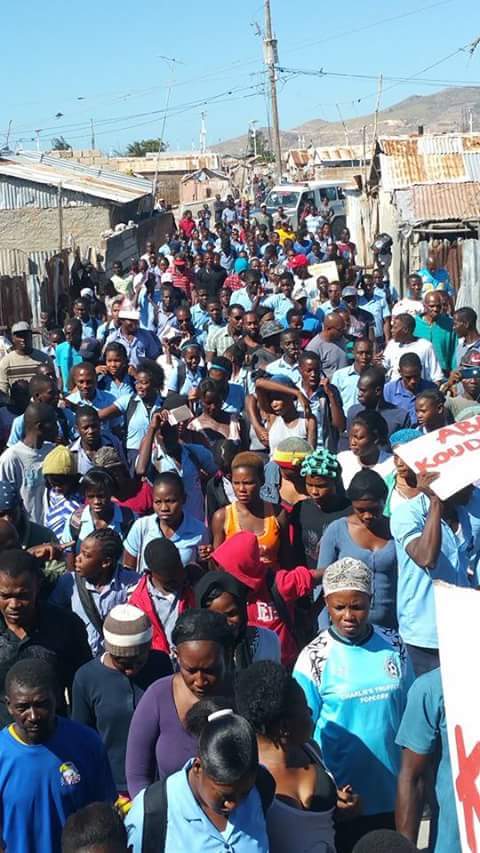 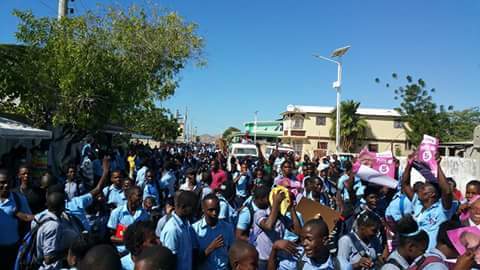