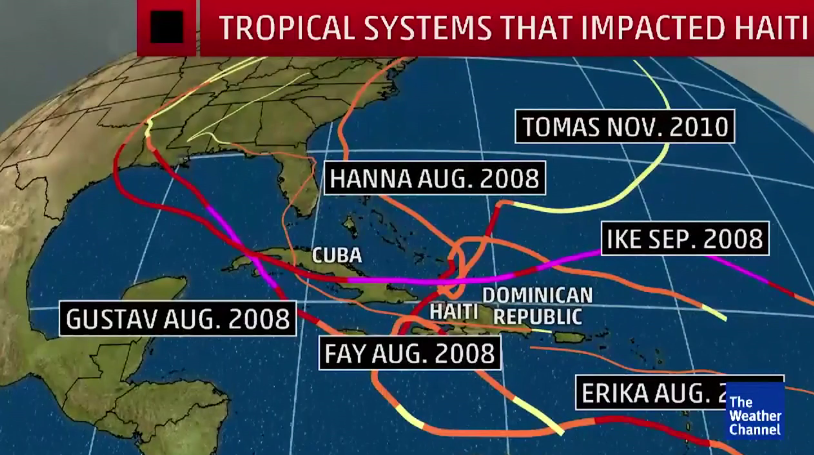 By Makini Brice and Gabriel Stargardter

PORT-AU-PRINCE/KINGSTON (Reuters) – Haiti and Jamaica implored residents in vulnerable coastal areas to evacuate and Cuba suspended flights on Sunday as Hurricane Matthew, the strongest storm to menace the Caribbean islands since 2007, spun slowly toward the region.

Matthew is expected to scrape western Haiti on Monday as a major storm bringing 145 mile per hour (230 kph) winds and life-threatening rain to the southern coast, while simultaneously lashing Jamaica.

The storm was advancing northwest at 5 miles per hour (7 km per hour), located about 295 miles (475 km) southeast of Kingston on Sunday afternoon. The hurricane center ranked it at Category 4 on the five-step Saffir-Simpson scale of hurricane intensity.

“Slow motion is almost always a bad thing for any land area impacted,” said John Cangialosi, a hurricane specialist at the center, noting that the storm’s devastating rains and winds will linger over the region.

With tropical storm conditions expected to reach Haiti and Jamaica late on Sunday, officials in both countries urged residents to prepare. In Haiti, the prime minister’s office issued a red alert warning for landslides, high waves and floods.

Matthew is the most powerful hurricane to form over the Atlantic since Felix in 2007 and as many as 40 inches (101 cm) of rain could fall on parts of southern Haiti. That could trigger deadly flash floods and mud slides, the Miami-based hurricane center said.

Haiti is the poorest country in the Americas and a combination of weak government and precarious living conditions for most of its people makes it particularly vulnerable to natural disasters.

More than 200,000 people were killed when a 7-magnitude earthquake struck the country in 2010, wrecking thousands of homes, schools and hospitals.

Despite worries about potential storm devastation, life in the southern Haitian town of Les Cayes continued as normal, residents said.

“If it passes by here, that’s when I protect myself,” said Jean Robert, 40, who leaned against a motorcycle outside of the bank where he works as a guard. “I have no preparation, I have nothing.”

Haiti started evacuating residents by boat from small, exposed sandy islands in the south on Saturday. Boats were prohibited from going to sea on Sunday.

In Jamaica, which could see up to 25 inches (64 cm) of rain, the government of Prime Minister Andrew Holness was preparing buses to help evacuate villagers in Port Royal, at the vulnerable edge of Kingston Harbour.

Outside his office, Holness told Reuters ahead of the first lashings of rain that his government was mobilized and about 80 percent of the 2.7 million Jamaicans were ready for the storm.

“The damage will have an impact on our economic growth, which is already fragile,” he said, as the wind began to pick up. Agriculture, tourism and towns cut off by storm damage and landslides in particular will be hurt, Holness said.

He said Jamaica had learned much about hurricane recovery since its last major storm, Hurricane Gilbert in 1988.

Kingston residents stocked up on canned food, water and batteries, while banks and offices boarded their windows. Fishermen were told not to go to sea.

In Cuba, where evacuations already were well under way, many flights were suspended as of noon on Sunday. In Santiago de Cuba, residents formed long lines for supplies while authorities took down traffic signals to protect them from the wind and hotels boarded up their windows.

“We have to prepare as if it has twice the power of Sandy,” Castro was reported as saying in the Granma newspaper on a visit to Santiago de Cuba.

A few miles (kilometers) east, the United States was airlifting some 700 spouses and children to Florida from its Guantanamo Bay naval base. Prisoners and service personnel will remain.

Cuba plans to move tourists to safer ground in the next 24 to 36 hours, state-run media said.

Later in the week, Matthew could affect the Bahamas and the U.S. East Coast, although forecasts so far out are often inaccurate. The U.S. State Department issued travel warnings for the Bahamas, Jamaica and Haiti.

Florida Governor Rick Scott said residents of his state should prepare for what could be a catastrophic storm.