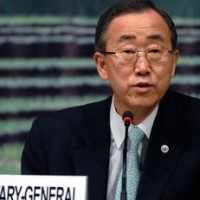 NEW YORK, USA (defend.ht) – The Secretary-General Ban Ki-moon sent Wednesday in Port-au-Prince three senior UN officials as part of the corrective measures proposed after the scandal gang rape by four Uruguayan peacekeepers on a young Haitian 18, in the town of Port-Salut (south).

According to a statement issued at the headquarters of the world body in New York during his stay, the delegation will meet with the commander of the Stabilization Mission of the UN (MINUSTAH), General Luiz Ramos, and the Haitian authorities . It will also work to strengthen the policy of “zero tolerance” that should apply to all UN staff.

Are part of the team, the Under Secretary General `s Support, Anthony Banbury, and advisors of Ban Ki-moon in the military and police, respectively, General Babacar Gaye and Older Ann-Marie said the spokesman of the Secretary General, Martin Nesirky.

After disciplinary action taken against the Uruguayan troops for serious violation of the Code of Conduct for United Nations, which should be followed by a judicial process in their country of origin, the Special Representative of the Secretary General for Haiti, Mariano Fernandez, s’ says in an open letter released Wednesday, “deeply shocked and saddened to have learned` s there for ten days, as MINUSTAH soldiers would have had an abusive and degrading to a young Haitian.”

“At the UN, it` s acts of”Zero Tolerance”, as regards any breach of its staff to meet its obligations to comply with the standards of conduct expected of an international civil servant. Absolute respect for the dignity and sovereignty of the people and host countries, traditions and culture among these obligations, “said the Chilean diplomat.

He insisted that the UN does “follow up with the suspects’ home countries to ensure, where appropriate, that they may be prosecuted and that appropriate penalties are imposed.

Committed on 28 July, the gang rape of the young fellow, whose images were filmed and broadcast on the net, provoked reactions of outrage in many sectors in Haiti, where students rioted on Wednesday to demand the immediate departure of peacekeepers.