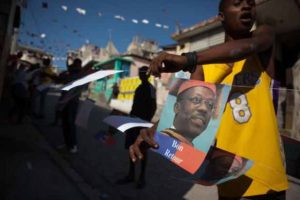 PORT-AU-PRINCE—Twice-ousted president Jean-Bertrand Aristide is finally poised to touch down on his native soil Friday after seven years in exile.

Thousands of Haitians are expected to turn out to greet the diminutive priest and firebrand leftist still affectionately known as Ti Aristide by the country’s long-suffering poor.

“The great day has arrived,” Aristide said before embarking on a chartered plane outside Johannesburg, South Africa.

He will be coming with U.S. actor and activist Danny Glover in tow, and an aide said last night the former president will make a formal statement upon arrival, expected sometime before noon.

“I think it’s going to be large,” Patrick Elie, a friend and former close adviser to Aristide, said of the likely reception.

“What will happen is that he will, by his presence, expose the fraud that these people running for president truly are,” Elie told the Star. “These people don’t represent the Haitian people.

“The election will go (ahead), but the point will have been made.”

Yet there could also be a lot of violence, said one man in Champs de Mars, claiming familiarity with both the capital’s street gangs and followers of the Lavalas movement Aristide once led.

He likened a return of Aristide to a tsunami. “Guns are everywhere,” he said. “Somebody’s going to die.”

Many of the disaffected poor who once flocked to Aristide have lined up behind Martelly, who, despite his right-of-centre politics, has been trading on a similar reputation as a political outsider.

“We are delighted to return home,” Aristide, speaking in Zulu, told reporters in South Africa. “In Haiti, also they are very happy . . . . Their dream will be fulfilled. Together, we will continue to share this endless love.”

With him were his wife, Mildred, and their two daughters, Michaela, 12, and Christine, 14, both of whom have spent much of their lives outside Haiti.

Despite or because of his seven years in exile, Aristide has long held a special place in the imagination of impoverished Haitians, displayed both in graffiti and the tiny photograph that Anel Sainterne pulls from his wallet.

His late father had similarly carried the picture, a tradition the 21-year-old Sainterne has vowed to carry on, even though he was but a baby when Aristide first rose to power in 1990. “He was my father’s preacher.”

With the Lavalas party banned from participating in the presidential election, Sainterne said he plans to vote for Martelly because “he’s very strong” and promises change from a status quo that has seen relatively little improvement in the lives of Haiti’s poor in the 14 months since the earthquake.

While conceding Martelly has likely picked up supporters in Aristide’s natural constituency, Elie said Martelly can’t claim to be truly popular because voter turnout was only 23 per cent.

Martelly came third in November’s vote, behind Manigat and the government-backed Jude Celestin, who was barred from the run-off amid allegations of fraud.

The United States has repeatedly called on Aristide to remain abroad until after Haiti’s presidential election, and had pressured South Africa to delay his departure.

Tommy Vietor, a spokesman for the U.S. National Security Council, said again Thursday that Washington “has deep concerns that president Aristide’s return to Haiti in the closing days of the election could be destabilizing.”

But South African cabinet minister Collins Chabane was quoted as saying “we can’t hold him hostage if he wants to go.”

The following year, Aristide was overthrown by a military junta, only to be re-instated by U.S. president Bill Clinton in 1994 after American forces intervened.

Aristide went into exile a second time in 2004 aboard a U.S. plane.

3 thoughts on “Aristide set for triumphant return to Haiti”