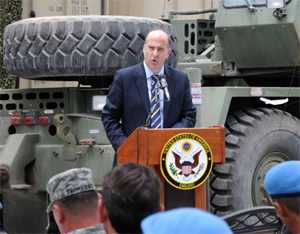 AMBASSADOR MERTEN MEETS WITH HAITIAN SENATORS AND IMMEDIATELY AFTER MEETING 16 SENATORS MAKE PUBLIC STATEMENT TO EFFECT THAT THEY WILL NOT ACCEPT GOUSSE AS PRIME MINISTER….TELL ME THE AMERICAN AMBASSADOR IS NOT MEDDLING IN HAITIAN AFFAIRS…MERTEN IS EFFECTIVELY RESPONSIBLE FOR GOUSSE REJECTION AND CONTINUED TURMOIL IN HAITI.

ONE MUST RECALL MERTEN’S STATEMENT TO GROUP – BEFORE NOVEMBER 28, 2010 ELECTION, ATTENDED BY FOREIGN NATIONALS… IN WHICH HE SAID, IN WORDS TO THE EFFECT,  “HE DIDN’T CARE WHAT THE POLLS SAID…HE WANTED THE  WOMAN”  (MANIGAT)

The criticism of Gousse focuses upon his arrest of Privert and Neptune for their involvement with the La Scierie Massacre in  St Marc during February, 2004.

Ambassador Merten sits down with a number of senators that includes murderers, thieves and drug smugglers, to critique a guy who was trying to respect the Constitution and the Nation. Some of these guys were involved with the St Marc massacre!!

If you look at the leaked embassy cables, there was no criticism of Gousse. The embassy discussed the Neptune affair and its potential implications..

First of all, if Neptune died as a result of his hunger strike…and,

Secondly, the implications of releasing Neptune, because of his hunger strike, without satisfying the law – with regard to his involvement in the St Marc Massacre.

The embassy cable implied that Neptune was responsible for the massacre and should be judged.

1 thought on “AMBASSADOR MERTEN MEETS WITH HAITIAN SENATORS AND IMMEDIATELY AFTER MEETING 16 SENATORS MAKE PUBLIC STATEMENT TO EFFECT THAT THEY WILL NOT ACCEPT GOUSSE AS PRIME MINISTER….”