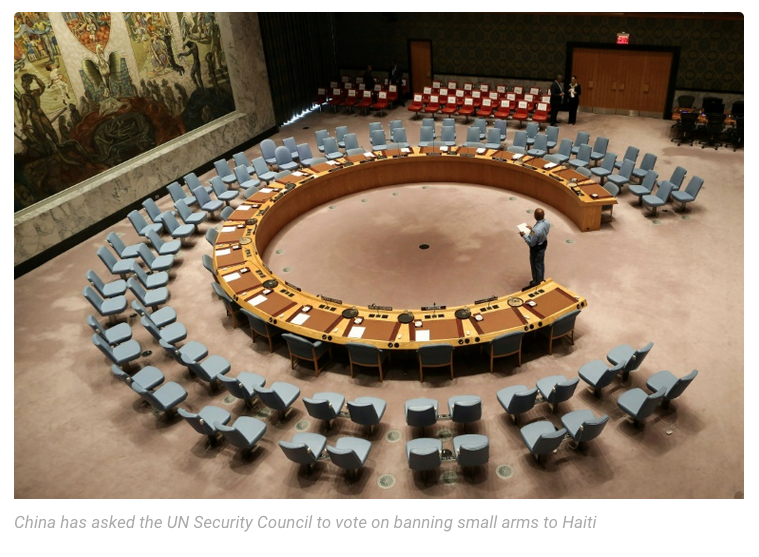 United Nations – The U.N. Security Council unanimously adopted a resolution on Haiti on Friday, with a targeted arms embargo, a U.N. Panel of Experts for naming those subject to a travel ban, and harsh sanctions against gangs supporting criminal activities — specifically citing Jimmy Cherizier, a gang leader known as “Barbeque.” Another draft measure to establish a non-U.N. rapid action force of member nations, called for by the U.N. Secretary General, to help the Haitian police, was delayed.

Haiti is the poorest country in the Americas and is facing an acute political, economic, security and health crisis, with a growing cholera epidemic, sparking a breakdown of law and order. Haiti’s criminal gangs, including Cherizier’s “G9 Family and Allies” gang, have protested for weeks, calling for Prime Minister Ariel Henry to grant amnesty to gang members, after they blocked Haiti’s ports, slowing fuel shipments.

The United Nations says that a record 4.7 million people are currently facing acute “catastrophic” hunger, because of what its food-related agencies described as  an “unrelenting series of crises has trapped vulnerable Haitians in a cycle of growing desperation, without access to food, fuel, markets, jobs and public services, bringing the country to a standstill.” Haitians have left the country in droves to escape the conditions, according to the U.N.

The resolution, drafted by the U.S. and Mexico, says that member states will stop anyone designated by a sanctions committee from traveling to or through their territories for the next year and blocks weapons and military equipment sales to those people, and looks to be limited in scope until “the Government of Haiti has developed adequate judicial and rule of law capacity to handle armed groups and criminal-related activities.”

U.S. Ambassador to the U.N. Linda Thomas-Greenfield negotiated for weeks to amend the original draft, obtained by CBS News, to bring China and Russia on board, after their initial objections.

The measure notes with “deep concern the protracted and deteriorating political, institutional, economic, security, human rights, humanitarian and food security crises in Haiti,” and says that “exclusion and inequality have an impact as aggravating factors in the situation concerning Haiti.”

At the vote, Haiti’s U.N. Ambassador Antonio Rodrique welcomed the resolution: “These measures contribute to an end to the violent and deadly activities of these armed groups, marauding in the country, and causing numerous victims and mass population displacement.”

Rodrigue said the measure will be a “deterrent” with the objective to “change behavior.”

U.K. deputy Ambassador James Kariuki told CBS News, “The U.K. welcomes the U.N. agreeing to sanctions on criminal gangs that are threatening Haiti’s stability and it looks forward to discussing more options for support to the Haitian authorities.”

But many experts and diplomats worry that the crisis in Haiti is beyond what sanctions can deter and that it is difficult to put sanctions on a criminal gang leader.

The country needs to be able to guide its own “Haitian-led future,” she said.

Thomas-Greenfield had earlier acknowledged that the history of intervention in Haiti is not a good one.

On Friday, she said, “We are sending a clear message to the bad actors that are holding Haiti hostage: The international community will not stand idly by while you wreak havoc on the Haitian people.”

“Sanctions are at their most effective when they are targeted specifically towards bad actors and allow humanitarian aid to reach civilian populations,” she said. “The resolution we adopted today accomplishes both these objectives.”