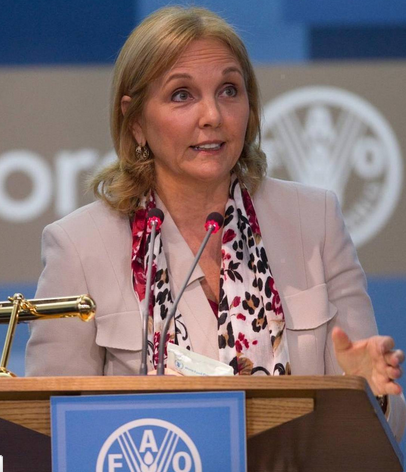 A former top State Department official and head of the United Nations’ World Food Program has been tapped to develop a comprehensive fundraising strategy to finance the U.N.’s plan to clean up cholera in Haiti — a disease introduced there by U.N. peacekeepers.

Josette Sheeran’s appointment as a high-level envoy for Haiti was announced Tuesday by U.N. Secretary-General António Guterres. The announcement comes two days before a planned U.N. Security Council visit to the country on Thursday so members can see firsthand how the 13-year U.N. Stabilization Mission in Haiti (MINUSTAH) is continuing its withdrawal of peacekeeping battalions and foreign police units ahead of the mission’s permanent closure in October.

Named as one of the world’s most powerful women by Forbes magazine when she was head of the World Food Program from 2007 to 2012, Sheeran is the third senior U.N. official chosen to help the world body raise funds to rid Haiti of the epidemic. But her role will be much broader than cholera fundraising, said U.N. officials who likened it to that of former President Bill Clinton, who was appointed U.N. special envoy for Haiti in 2009. As Guterres’ special envoy, Sheeran will support national efforts to reach Haiti’s 2030 sustainable development goals, as well as guide the approach to eliminate cholera in Haiti.

Scientific studies have traced the introduction of cholera in Haiti to Nepalese soldiers stationed near a river in the rural town of Mirebalais in the Central Plateau region after the devastating Jan. 12, 2010, earthquake. Since October of that year, more than 800,000 Haitians have been sickened by cholera and more than 9,000 killed, according to the country’s health ministry.

Sheeran steps into the role as humanitarian agencies in Haiti such as the World Health Organization/Pan American Health Organization face serious funding shortages that threaten to reverse progress made on controlling the water-borne disease. The U.N. has been struggling to raise $400 million to fight it.

Last week, U.N. Deputy-General Secretary Amina J. Mohammed, while presenting Guterres’ latest fundraising push and report on cholera, told member states that only $2.7 million had been raised, and now only $183,000 was left. The bulk of that money was raised by Sheeran’s predecessor, Dr. David Nabarro, a British physician with more than 30 years of public health experience who previously had raised $3.5 billion for the Ebola fight.

Despite Nabarro’s success with Ebola, he ran into resistance on cholera, as the United States and other member states refused to contribute to the trust fund. Pedro Medrano Rojas, the retired Chilean diplomat who had the job before Nabarro, also left his 18-month tenure in 2015 disappointed by the international community’s failure to “acknowledge the fact that we have in Haiti the largest epidemic in the Western Hemisphere.”

In February, Guterres wrote to nations asking if they intended to make voluntary cholera contributions and received a lukewarm response. Now, he’s asking countries to turn over $40.5 million to the cholera fund, money that will be left over when the mission in Haiti ends.

So far, that plan has garnered little interest. The U.S. said it supports the idea in principle but “is not in a position to contribute in this way.”

The U.N. has struggled to raise money for Haiti, not just for cholera but also for other humanitarian efforts including last year’s Hurricane Matthew response and recovery. While some observers blame the lengthy list of crises around the globe for the reluctance to pay for cholera cleanup, others blame Haiti fatigue.

Sheeran has experience in attracting world attention to burgeoning problems. In 2008, as food prices dramatically increased, Sheeran warned of a worldwide food crisis and heavily lobbied the United States and other governments for additional aid.

She currently heads the nonprofit Asia Society, and will remain in that job as she champions Haiti. Sheeran previously served in several high-level U.N. roles and as vice chair of the World Economic Forum. Prior to her 2007 appointment as the head of the World Food Program, Sheeran served as undersecretary for economic, energy and agricultural affairs at the State Department during the George W. Bush administration, and as deputy U.S. trade representative in the Office of the U.S. Trade Representative

COMMENT: HAITIAN-TRUTH.ORG
Another “jobs for the boys” situation or, in this case, “jobs for the girls.”
The Secretary General promised $400,000,000 to compensate for United Nation introduction of cholera into Haiti and its long-term refusal to accept responsibility.
The World replied with a few million.
What will the appointment of this lady do?
PROBABLY ZERO!!