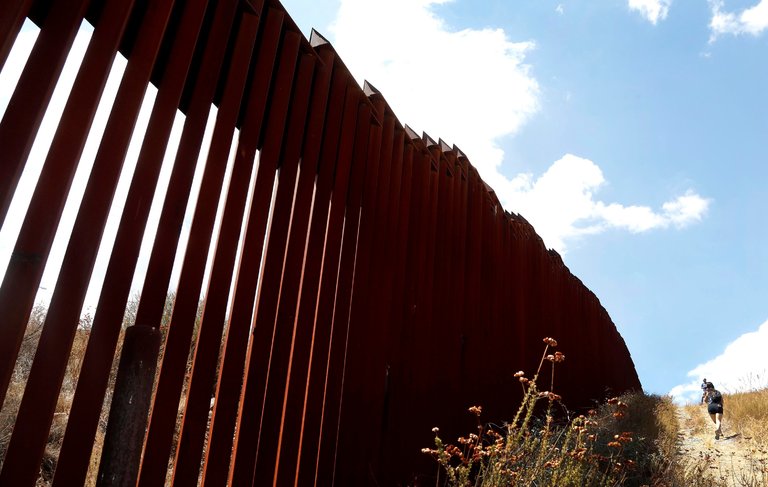 The border wall between Tecate, Mexico, and Tecate, Calif., last month. Credit Paul Buck/European Pressphoto AgencyWASHINGTON — The White House on Sunday delivered to Congress a long list of hard-line immigration measures that President Trump is demanding in exchange for any deal to protect the young undocumented immigrants known as Dreamers, imperiling a fledgling bipartisan push to reach a legislative solution.

Before agreeing to provide legal status for 800,000 young immigrants brought here illegally as children, Mr. Trump will insist on the construction of a wall across the southern border, the hiring of 10,000 immigration agents, tougher laws for those seeking asylum and denial of federal grants to “sanctuary cities,” officials said.

The White House is also demanding the use of the E-Verify program by companies to keep illegal immigrants from getting jobs, an end to people bringing their extended family into the United States, and a hardening of the border against thousands of children fleeing violence in Central America. Such a move would shut down loopholes that encourage parents from Guatemala, El Salvador and Honduras to send their children illegally into the United States, where many of them melt into American communities and become undocumented immigrants.

“Now is the time for Congress to adopt these immigration priorities,” Marc Short, the president’s legislative director, told reporters during a conference call on Sunday night. Otherwise, he added, illegal immigration “will likely increase.”

While it is unclear whether Mr. Trump views the demands as absolute requirements or the beginning of a negotiation, the proposals, taken together, amount to a Christmas-in-October wish list for immigration hard-liners inside the White House. Immigration activists have long opposed many of the proposals as draconian or even racist.

The demands were developed by a half-dozen agencies and departments, officials said. But among the officials behind the demands are Stephen Miller, the president’s top policy adviser, and Attorney General Jeff Sessions, both of whom have long advocated extremely aggressive efforts to prevent illegal entry into the country and crack down on undocumented immigrants already here.

The demands represented a concerted effort to broaden the expected congressional debate about the Dreamers to one about overhauling the entire American immigration system — on terms that hard-line conservatives have been pursuing for decades.

In a letter to lawmakers, Mr. Trump said his demands would address “dangerous loopholes, outdated laws and easily exploited vulnerabilities” in the immigration system, asserting that they were “reforms that must be included” in any deal to address the Dreamers.

Democratic leaders in Congress reacted with alarm, saying the demands threaten to undermine the president’s own statements in which he had pledged to work across the aisle to protect the Dreamers through legislation.

What ‘Dreamers’ Gained From DACA, and Stand to Lose

As President Trump moves to end the Obama-era program that shields young undocumented immigrants from deportation, listen to a few of the 800,000 affected by the program.

“The administration can’t be serious about compromise or helping the Dreamers if they begin with a list that is anathema to the Dreamers, to the immigrant community and to the vast majority of Americans,” Senator Chuck Schumer of New York and Representative Nancy Pelosi of California, the Democratic leaders in the Senate and the House, said in a joint statement.

Mr. Schumer and Ms. Pelosi, who declared after a White House dinner last month that they had reached a deal with Mr. Trump to protect Dreamers, denounced the president’s demands as failing to “represent any attempt at compromise.” They called it little more than a thinly veiled effort to scuttle negotiations even before they begin in earnest.

“If the president was serious about protecting the Dreamers, his staff has not made a good-faith effort to do so,” they added.

Last month, the president abruptly ended an Obama-era policy called Deferred Action for Childhood Arrivals, or DACA, in which former President Barack Obama had used his executive authority to protect about 800,000 of the young immigrants from the threat of deportation and provide them work permits.

Even as Mr. Trump kept his campaign promise to halt what he had described as “one of the most unconstitutional actions ever undertaken by a president,” he quickly added that he would work with Democrats in Congress to replace the executive policy with legislation, giving them six months to do so. But a White House official said on Sunday that Mr. Trump was not open to a deal that would eventually allow the Dreamers to become United States citizens.

“The president’s position has been that he’s called on Congress to come up with a permanent solution and a fix to this process,” Sarah Huckabee Sanders, the White House press secretary, said last week.

Immigration advocates will most likely urge Democratic leaders to refuse a deal that includes the president’s proposals. But immigration and human rights advocates are also under pressure to do something for the Dreamers, thousands of whom will begin, by March, losing permission to work and protection from deportation if a deal is not reached.

Privately, many advocates have acknowledged that a negotiated deal with the Republican president is likely to include some immigration changes.

Administration officials responsible for securing the border and enforcing the nation’s immigration laws told reporters on Sunday night that the changes requested by the president were essential to protecting American workers from unfair competition and deterring what they described as a never-ending flow of illegal immigrants into the country.

On the president’s wish list is a long-sought Republican goal of stopping American residents from sponsoring the arrival of extended family members. His demand would limit residents to bringing only spouses and children.

Also central to the effort, officials said, are legal changes that would strip away the rights of illegal immigrants to claim asylum or make another case to stay in the United States, allowing federal officials to more quickly deport them.

“We cannot have true border security if we don’t change federal laws to ensure that people who are apprehended are removed,” said Ron Vitiello, the acting deputy commissioner for Customs and Border Protection.

Thomas D. Homan, the acting director of Immigration and Customs Enforcement, said a vast increase in the number of agents and other federal resources would allow for a crackdown on immigration violators that had been difficult in the past.

Another key part of that crackdown would be on tens of thousands of children who have surged across the border with Mexico during the past several years, many of them seeking to escape gang-related violence in Central American countries. This year, about 38,500 children have been apprehended at the border without their parents.

Administration officials say the children — many of whom are sent to live with a cousin, aunt, uncle or sibling in the United States — must be turned back or quickly deported once they arrive. Under current law, many of them remain in the United States for years during legal proceedings to evaluate their asylum or refugee claims.

If the children are not deported quickly, officials say, many will never leave, eventually becoming a new population of sympathetic young immigrants who seek amnesty. That could create lasting cycles in which illegal immigrants demand to be given a legal status, the officials say.

The president’s demands include new rules that say children are not considered “unaccompanied” at the border if they have a parent or guardian in the United States. They also propose treating children from Central America the same way they do children from Mexico, who can be repatriated more quickly, with fewer rights to hearings.

Mr. Trump is also calling for a surge in resources to pay for 370 additional immigration judges, 1,000 government lawyers and more detention space so that children arriving at the border can be held, processed and quickly returned if they do not qualify to stay longer.

Critics say the focus on deporting unaccompanied children is heartless and impractical. They say many were sent by their parents on long, dangerous treks in the hopes of avoiding poverty, hunger, abuse or death by gangs in their home countries.

Advocates acknowledge that more resources are necessary to speed up those hearings. But they argue that White House efforts to demand quick decisions are likely to merely result in many children being sent back to places where they are raped, beaten or killed.

Sending the children back with just a cursory hearing is “a recipe for disaster in terms of returning people to danger,” said Wendy Young, the president of Kids in Need of Defense, a group that aids young refugees.