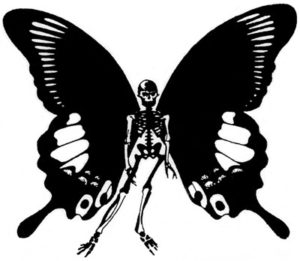 What if Death had style? What if Death wore black sunglasses, liked to dance, smoke cigars and drink rum? What if he loved to indulge in bawdy sexual references (yes, in this case, Death is a he); and what if his presence made people want to party ’til the sun rose up in the sky? I reckon you’d invite him into your life too.

Non-Haitians and some Haitians hear the word Vodou — or voodoo, in Hollywood parlance — and shiver with fear and worry and pity and condescension. Ignorance can really make a person feel bad. So, let me do a quick rundown on Vodou, this way everyone can hurry up and get back to feeling good.

Like Judaism, Vodou is a religion and a way of life. As with Catholicism Vodouisants (or practitioners) believe in an all-powerful force called God; but standing in for the Catholic saints are the lwas, God’s helpers on the physical plane. In the same way that Hinduism is predicated on a number of gods and goddesses, all with specific personalities and powers, the lwas of Vodou are also imbued with wonderful and terrible powers to put order or mayhem in human beings’ affairs, depending on their behavior. However, there are two very important distinctions that set Vodou apart from other religions:

1. Whereas adherents of most religions seek communion or a merging with God either before or after they leave their bodies, Vodouisants seek to have their bodies possessed by the gods, thereby becoming gods themselves, if only for awhile. Very powerful, confidence-building stuff, wouldn’t you say?

2. The gods of Vodou come from Africa. Need I say more? Okay, what I mean is that these spirits are made of raw, intense, salty stuff. Their essence is hardcore; they are theatrical and lively, they respond to drums, and in exchange for their services, they expect to be served. In fact, there’s a saying in Haiti about the lwas: you don’t have to believe in them, as long as you serve them!

So, about the Spirit of Death. He has a name — Baron Samedi (Samedi means Saturday in French) — and he somehow manages to take the somber business of death and turn it into something vital. See, he’s not just the Spirit of Death; he’s also the Spirit of Sex because part of his job is to oversee the cycle of regeneration: helping the departed into afterlife while assisting those spirits entering new bodies on the earth plane. And while the Baron can be a seriously foreboding character, he also has a crazy sense of humor. Practitioners love the hell out of him. Is it any wonder that two years after the formidable earthquake, which claimed over 200,000 lives (there is still dispute about the actual number), Haitian people are looking to the promise of a better tomorrow as laid out by their new president, a beloved musician whose former onstage antics ran toward the eccentric habits of the god who owns Saturday night? I was in Haiti over the Christmas holidays, and I’m here to report that there is hope in the air.

For the record, I don’t practice Vodou or any other religion, but there’s something about that Baron that appeals to me, so much so that he stars in my new novel, Saturday Comes, A Novel of Love and Vodou, which he co-narrates. And it isn’t just me and all those Vodouisants, either. The UCLA Fowler Museum of Cultural History is getting ready to wow Los Angeles with a Baron-centric exhibition in September, 2012 titled In Extremis: Death and Life in 21st Century Haitian Art.

Back in 1995, The Fowler Museum hosted the groundbreaking traveling exhibition, The Sacred Arts of Haitian Vodou, which brilliantly elevated the thinking and dialogue around this misunderstood religion (no, believers don’t stick pins in dolls). In Extremis will “explore the interface between the catastrophes of the past decade in Haiti, and the corresponding emergence of dramatically new forms of art in sculpture, fabrics, paintings and altar installations.” Keep a lookout for it. Who knows? Maybe the Baron will drop in to entertain us while we live. And since this is Los Angeles we’re talking about, I won’t be surprised if he gets offered his own TV series. He’s that good.