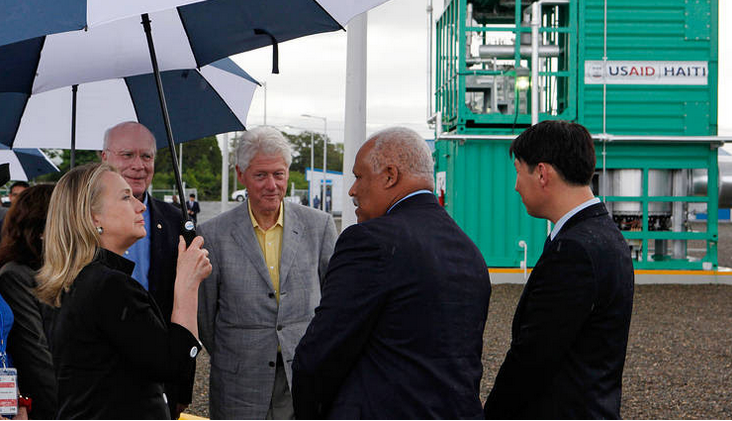 The Fourth Estate is in foreclosure. The “who, what, where, when, and why” of traditional coverage is missing. A thorough analysis of what is redacted or completely missing in the Clinton emails is not forthcoming, and the real scandal resides in politically motivated reporting. It is time that the press wipe themselves clean of political bias and stop shouting about the paper tiger of wiped servers. To steal a quote from Hillary at the initial Benghazi hearing, “What difference does it make?”

The truth is that no one will ever be privy to the complete correspondences, but there is more than enough information available to discuss how the United States conducts corrupt foreign policy in Haiti. Even if a Freedom of Information Request (FOIA) were submitted to obtain every last email on the official State Department server during Secretary Clinton’s term, most would not see the light of day. Clinton’s staff, under the direction of Cheryl Mills, was known for blocking the release of what they deemed “politically sensitive” documents requested under the FOIA law.

I mention Haiti because, after spending a significant amount of time there post-earthquake, I have come to understand that corruption has been a part of our foreign policy for hundreds of years. I am not a Haiti expert, but I have seen firsthand the malfeasance of USAID, NGOs, the United Nations, foreign church groups, and international banking institutions.

Imagine placing printouts of the available 307 Haiti emails end to end. Give it one twist and tape the ends together. You now have a Mobius Strip with no beginning, no end, and only one surface.

It is our fault and our fault alone if we assume a kind of fake innocence that the truth is unavailable or too confusing to pursue. Orientation and interpretation on this infernal Mobius construct depend upon perspective, but we need more than whining fake innocence to justify jettisoning critical thinking.

There is a timeline available to us. It is documented by the Center for Economic Policy Research (CEPR), the Haitian press, by former OAS Ambassador Ricardo Seitenfus, and others. This timeline provides the framework to examine what happened in Haiti in 2010. There is so much more than the “gotcha” moment provided by the Chelsea Clinton email to her parents about policy failures after the January 2010 7.0 earthquake.

In 2010, Haiti faced the triple whammy of an apocalyptic earthquake, a cholera epidemic courtesy of the United Nations, and an election cover-up orchestrated while a good portion of the population was still homeless. Three-hundred-and-seven emails would barely cover it.

According to Ricardo Seitenfus in his book, International Crossroads and Failures in Haiti (L`echec de l`aide internationale a Haiti: Dilemmes et egarements), in April 2009, the State Department, under the leadership of Hillary Clinton, “had decided to completely change the U.S. cooperation strategy with Haiti.” In case you don’t know, Seitenfus was fired from his OAS position in December 2010 for telling the truth to the Swiss newspaper Le Temps about Cholera, NGOs, and a rigged election. His tell-all book lays out a doctrine of intervention.

“Apparently tired with the lack of concrete results, Hillary connected the actions of her government to the smart power doctrine proposed by the Clinton Foundation. From that moment on, the solutions would be based solely on evidence. The idea, according to Cheryl Mills, Hillary’s Chief of Staff, was that if we’re putting in the assistance, we need to know what the outcomes are going to be.” See also “How the World Failed Haiti.”

Now, connect Cheryl Mills’ Haiti Doctrine of orchestrated outcomes with a June 16, 2009 Wiki-Leaks cable, “Deconstructing Preval.” “Managing Preval will remain challenging during the remainder of his term yet doing so is key to our success and that of Haiti.”

Most of the emails discuss the earthquake, and a few mention the emerging cholera epidemic. Two of the “cholera” emails discuss Sarah Palin’s upcoming visit to Haiti, one is an AP report about “Cholera fears sparking an anti-clinic protest in Haiti,” sent via Huma Abedin to Hillary, another is a Reuters report quoting President Rene Preval confirming the outbreak and, one is a press highlight detailing Nepal’s denial that Nepalese soldiers introduced cholera into Haiti by routing raw sewage into the Mirebalais River.

Can it be that only five emails mentioned cholera in the initial stages of an epidemic that would eventually kill 8,972 people and sicken 745,588 since October 2010 (July 2015 numbers).

The lack of emails discussing the November 2010 elections is noteworthy. The search parameter “Martelly” returns one result. An email from Cheryl Mills to Hillary Clinton includes an overnight brief from December 8, 2010.

The same email thread has Cheryl Mills providing the unacceptable Haitian CEP results to Hillary. These results would soon change.

This is the statement we released late last night. Election results order Manigault, Celestin, Martielly. May be good to have Tom Adams give you a quick update today.

The original State Department “announced results” were compiled by the CEP, the Haitian Haiti’s Provisional Electoral Council (CEP). They had Jude Celestin in the runoff and Martelly was out of the next round.

The international observers (CNO) came up with a different outcome. An analysis and timeline can be found here at the Center for Economic and Policy Research (CEPR) website.

In a heavily redacted email (Case No. F-2014-20439 Doc No. C05777664) on Tuesday December 7, 2010, Cheryl Mills instructs a staffer to “print the traffic” on a draft embassy statement that discusses something the “tabulation center” did not show.

The final draft email of the embassy statement (Case No. F-2014-20439 Doc No. C05777696), from Cheryl Mills to Hillary, had all the necessary diplomatic ducks in a row to get Martelly into the runoff.

Like others, the Government of the United States is concerned by the Provisional Electoral Council’s announcement of results from the November 28 national elections that are inconsistent with the published results of the National Election Observation Council (CNO)

The “tabulations” of the CEP, tabulations that the State Department announced, were now officially thrown into question. The will of the Haitian voter, however, was irrelevant. In this plot, the CNO played a central role in the strategy of electoral sabotage implemented by the international community in the November 2010 elections in Haiti. Choosing the CNO was not because of its expertise, since it had none. In fact, the Council is a union of various purportedly civil society organizations, which in reality form an array of opposition to the government.

In an article published in the Haiti Sentinel, an article that has since been scrubbed from the Internet except in cached form, CEP President Pierre Louis Opont says “that as director general he gave the official recount results to the international observers. He says that Cheryl Mills, the Chief of State for Secretary of State Hillary Clinton, and the observers from the Organization of American States then gave results different then what were passed to them.”

The American press has not yet investigated this claim.

The end result was that musician Michel Martelly was declared president-elect after receiving the votes of less than 17 percent of the electorate in the March 2011 second round.

Is it fair to pin all of the blame on Hillary Rodham Clinton when secrecy, duplicity and arrogance have been part of the U.S. policy toward Haiti at least since December 17, 1914 when Citigroup (now Citibank) stole Haiti’s gold reserves? Marines descended upon Haiti to transport a half million dollars in gold to the Wall Street vaults of the National City Bank of New York.

And we’ve hardly seen anything yet. Or maybe, we have seen it all before.

The following quote is taken from Senate hearings that took place from October 4 to November 16, 1921. The Government Printing Office published the official record of the proceedings.

“From 1804 to 1915 Haiti was a sovereign state under a republican form of government. She won her independence from France in 1804. She was deprived of it in 1915 by the United States. Since then we have been in virtual control of her territory, our marines have been in military occupation of the country, and the former republic has been stripped by us of every vestige of her sovereignty.”

There is no beginning and no end to the continuing rape of Haiti by just about everyone.

Note: The Haitian Lawyers Leadership Network (HLLN) provided valuable tips and leads which have been vetted in this post.