Traditional faith ‘offers no real solutions for the poor’ and is a big social problem, says new prelate 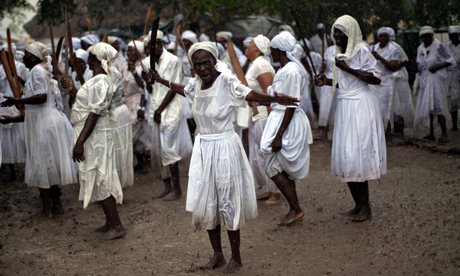 Voodoo believers dance in the rain during an Easter ceremony in Souvenance, Haiti. Photograph: Ramon Espinosa/AP

Haiti’s first Roman Catholic cardinal has described voodoo as a “big social problem” for his desperately poor country, arguing that the religion offers “magic” but no real solutions to a population deprived of justice and a political voice.

Chibly Langlois, who was made a cardinal by Pope Francis in February, linked Haiti’s belief system to its chronic political problems, which he says force poor Haitians – the overwhelming majority of a population of 10 million – to seek supernatural solutions.

“If a person is well educated and has the financial means, they will go to a doctor [instead of the voodoo priest] when they get sick. If that same person went to the court to get justice they would not go to the voodoo priest to get revenge. It’s a big problem for the church. And for Haiti,” he said.

About 80% of Haitians are Roman Catholic; roughly half the population also practises voodoo – though many do not do so in public. “That’s why voodoo ceremonies are conducted at night–time. They are ashamed to say they practise it,” said Langlois. 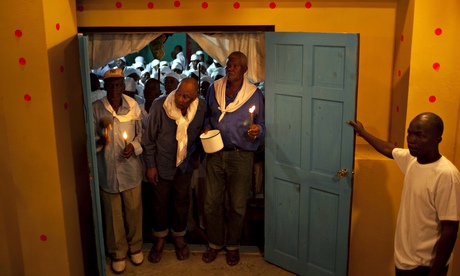 Believers stand at the entrance to a temple before a voodoo ceremony in Souvenance, Haiti. Photograph: Dieu Nalio Chery/APVoodoo, which has its roots in west Africa’s pantheist religions but incorporates images and rituals of Catholicism, has played a central role in Haitian society since before colonial times. A voodoo ceremony in August 1791 is said to have helped trigger Haiti’s first big slave insurrection against the French colonisers. It was banned in 1934 and categorised as sorcery in the penal code.

In the 1940s Catholics in Haiti burned voodoo masks and drums in a series of “anti-superstition” campaigns. Meanwhile, Hollywood popularised the (entirely fictional) image of voodoo as a religion of zombies, devil worship and ceremonies involving wax dolls and pins.

Voodoo remained banned in Haiti until 1987, when a new constitution came into force, and it was not until 2003 that it was given legal recognition as a religion with equal standing to Catholicism. 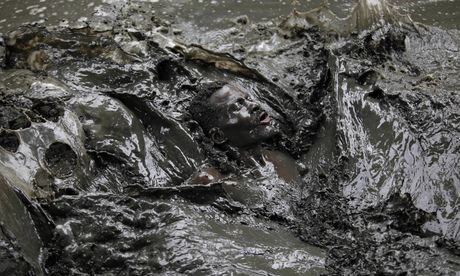 A man swims in a mud pool during a mass ritual in which thousands of believers sacrifice animals and pray in mud pools to ask the voodoo spirits and the dead for help with money, the future and children. Photograph: Eduardo Munoz/ReutersBut after decades of uneasy tolerance by the Catholic church, Langlois declared that Haitians cannot follow both religions. “The church cannot – and does not – ignore the cultural elements and uses of voodoo, like the drum, the rhythm, the way of singing. But you can’t be voodooist and Catholic. The Catholic should be pure Catholic; the voodooist should be pure voodoo,” he said.

It is a clear, if controversial, message, for the poorest country in the Americas.

Richard Morse, a Haitian-American anthropologist and musician, whose mother was a voodoo priestess, described the cardinal’s remarks as dishonest.

“If you want to talk about Haiti’s ills, you’ve got to start with slavery, in which the Catholics were very involved. So I’m not sure what good comes of blaming the victim.”

Morse also questioned the Catholic church’s right to prescribe for Haitians. “Voodoo was born in Haiti, of Haitians and it is our culture. Catholicism is imported and we respect it and embrace it but we also love the truth.” 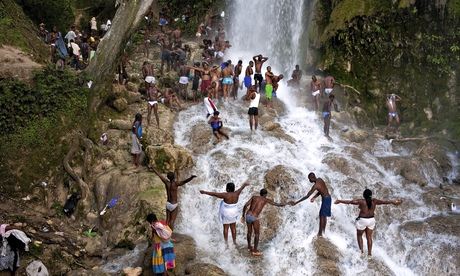 Voodoo and Catholic pilgrims bathe and pray in the waterfall at Saut D’eau, Haiti. Photograph: David Levene for the GuardianJeanguy Sainteus, founder of Haiti’s leading dance company, said that he regarded voodoo as being more meaningful than the Catholic faith. “I feel more connected with the lwa [voodoo spirits] than [anything I feel] when I go to church,” he said.

“Voodoo is a religion, like the Catholic faith. It’s certainly not a big problem for Haiti. If people use voodoo properly and if we are open about it and talk about who we really are, it can only be good.”

Sainteus said voodoo’s standing as the religion of the poor meant it was “misused and misunderstood”. He added that the cardinal and other Haitians “need to see voodoo with their eyes, not their prejudice, because it is the key to Haiti’s future”.

Langlois, 55, the youngest of Jesuit Pope Francis’s recent crop of 19 cardinals, is seen to epitomise the Vatican’s determination to refocus the church’s attention on the poor.

He says it was this commitment to the poor that led him to broker negotiations between President Michel Martelly’s administration and the opposition in mid-March, in an attempt to break political deadlock over the organisation of senate and local authority elections that are more than two years overdue.

“As Pope Francis said, he would rather have a church that gets its hands dirty than one that is closed in on itself,” said Langlois. “I should work to help provide a better solution to the country even if I know I’m taking a risk.”