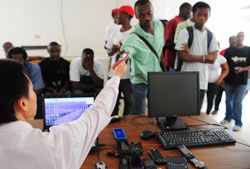 The Haitian president said Natcom had set up the largest comprehensive telecom network in Haiti, benefiting the Haitian people while contributing to boosting the sector.

In the last 12 months, Natcom has laid 3,000km of optical fibre cable, established about 800 base transmission stations and set up 2,000 sales points in retail outlets.

The president also praised Natcom’s social and charitable activities, such as support for victims of the earthquake in January 2010, offering free internet services in schools and preferential mobile prices for students, police and the poor.

Meanwhile, Hung said Natcom would help Haiti’s telecom sector keep pace with that of advanced nations, and contribute to the rebuilding and development of the Caribbean country that was devastated by last year’s earthquake.

Since its trial run on July 20, 2011, Natcom had attracted 140,000 mobile subscribers and thousands of 3G internet subscribers, said Tran Sy Tien, Natcom deputy director. He said the network expected these figures to reach 500,000 and 20,000 by the end of the year.

The company was striving to attract 2 million mobile subscribers by the end of 2012, he added.

Natcom is Viettel’s third telecom project abroad, following Cambodia and Laos. The group is scheduled to expand its operations into Mozambique next year.

Natcom (a joint venture between Viettel and the Central Bank of Haiti-BRH) on Wednesday officially launches its services.

Backed by significant investment from Viettel, Natcom currently owns the best telecom infrastructure on the island. It also plans to introduce broadband services to the island.

After just a year, Natcom now has 1,000 2G and 3G stations, 30 per cent higher than the amount built by the island’s biggest provider after six years.

Viettel is the fastest growing group in Viet Nam. Its revenue has doubled year-on-year from 2005-2009. In 2010, Viettel’s revenue reached US$5 billion.

Viettel is looking to expand its global reach to 400-500 million people by 2015 and 1 billion by 2020 and be among the top ten biggest telecom firms in the world. — VNS