With economic problems piling up at home, Venezuela has emerged as a big player and big spender in the Haitian recovery effort.

LEOGANE, Haiti — Venezuela’s first flag was stitched together on the shores of Haiti in 1806 before being carried across the Caribbean by revolutionary hero Francisco de Miranda. Ten years later, Latin America’s founding father, Simón Bolívar, would set sail from Haiti loaded with guns and Haitian soldiers on his way to liberate much of South America from the Spanish.

It’s a historical debt that Venezuelan President Hugo Chávez says his country will never be able to repay. But in the wake of Haiti’s devastating earthquake, the South American nation seems bent on doing just that.

Venezuela has pledged more than any other single nation for Haitian hurricane relief — at a time when it is facing problems of its own, including an energy-sapping drought, debilitating inflation and food shortages.

The morning after the Jan. 12 earthquake — as the ground still buckled with aftershocks — Venezuela was the first nation to respond, landing a military plane loaded with food and Haitian medical students.

Then, at the international donors conference in March, Venezuela raised eyebrows and questions about creative accounting when it pledged $2.4 billion to Haiti’s relief efforts. That was more than the United States ($1.2 billion), the European Union ($1.7 billion) and the World Bank ($399 million).

“You could say that about any country in the world,” he said. “Even the doctors from the United States that are here, you could tell them: `Why are you in Haiti if we need you back home?’ We recognize that we are not alone in the world, that there are countries with massive needs that require our help.”

As Chávez has tried to export his brand of “21st Century Socialism” and undermine U.S. influence in the region, international aid has been a key component of his arsenal, said Michael Shifter, president of the Inter-American Dialogue.

“His aid has a very strong political component,” he said. “It’s designed to show solidarity with those who are in need and to demonstrate that his approach has appeal and works — and is better than what the United States is doing.” 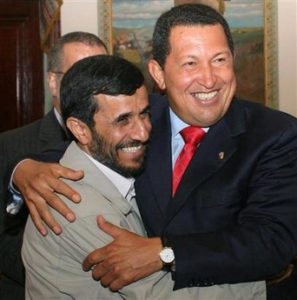 But as economic troubles mount in Venezuela, and Chávez faces a serious political challenge with upcoming legislative elections in September, the aid is likely to slow.

“He has a lot to handle at home,” Shifter said. “There is a limit to how energetic he can be in his regional diplomacy.”

In Haiti, Venezuela has built electricity plants, open-air markets, homes and healthcare clinics. Often working in conjunction with Cuba, Chávez is also pumping millions into agricultural programs and is loaning the government money to refurbish the airport in Haiti’s second city, Cap Haitien.

“It’s a relationship that works,” Haitian Finance Minister Ronald Baudin said. “During this crisis, they have given us an enormous amount of help and we are grateful for that — just as we are with the help from others in the international community.”

But Baudin said tracking aid from Venezuela — or any nation — is complicated. “It’s not that they are going to hand you over the cash,” he said.

Critics have pointed out that the pledge is padded with projects that pre-date the earthquake, but Baudin wasn’t interested in that debate.

“I believe when you evaluate the worth of the contribution of Cuba and Venezuela’s aid, it’s worth a lot of money,” he said.

The government’s aid effort came in for some criticism recently when Venezuelan media reported that 51 shipping containers carrying tons of rotten food intended for Haiti were turned away. The Venezuelan government said it withdrew the containers voluntarily for fear they would spoil.

In a steamy warehouse in Port-au-Prince, the Venezuelan ambassador’s wife, Sor Loreto de Canino, supervised as food for some 15,000 quake victims was loaded onto trucks. The operation had the grassroots feel of a church mission.

Young Haitian men, wearing T-shirts emblazoned with portraits of Ernesto `Che’ Guevara and Chávez strained under the weight of boxes of noodles, tuna and flour.

While the food aid may be modest compared to other international efforts, Venezuela’s biggest ticket contribution is the PetroCaribe program, which provides Haiti with 14,000 barrels of fuel per day at subsidized prices and with deferred payments.

While President René Préval may be happy with the Venezuelan arrangement, not everyone is, said Louis-Jeune Levaillant, president of Haiti’s chamber of deputies.

“At the parliamentary level, we would like to see our country diversify its relationships,” he said. “Haiti should not be dependent on Venezuela for oil.”

Finance Minister Baudin said the oil relationship with Venezuela is strategic and “sensible.” He also said Haiti has the right under the agreement to seek oil shipments from outside sources when PetroCaribe deliveries are delayed.

In the hard-hit town of Léogane, in southern Haiti, is the Simon Bolívar tent city. Unlike many of the overcrowded and dirty encampments of Port-au-Prince, Venezuela has managed to limit newcomers to this one, keeping it organized and tidy.

Sitting under a green military tent, where she lives with six family members, Stephany Pierre, 30, said she was thankful to Venezuela for a place to live, food and the adult literacy classes the camp was offering.

“Tell Mr. Chávez he can stay with us if he ever comes to Haiti,” she said squinting against the sunlight. “But tell him these tents are very hot, we need real homes.”

1 thought on “Venezuela major donor of assistance to Haiti”