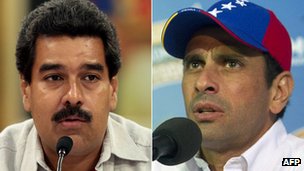 The US government is refusing to recognise Venezuela’s President-elect Nicolas Maduro’s victory in disputed elections in Venezuela.

Secretary of State John Kerry said the US was not yet ready to validate the results of Sunday’s poll.

Mr Maduro’s narrow victory has been challenged by the opposition leader, Henrique Capriles.

Mr Capriles is insisting on a vote-by-vote recount and has now submitted a formal request for one.

However, the National Electoral Council in Venezuela has so far refused to order one, and the Supreme Court said on Wednesday that there was no legal basis for it.

Mr Kerry has supported a recount.

“Obviously, if there are huge irregularities we are going to have serious questions about the viability of that government,” he told members of the House Foreign Affairs Committee.

He insisted: “We don’t care about your recognition.

“We have chosen to be free, and we are going to be free with or without you.”

He added: “The US intervention in Venezuela in recent months, and particularly during the election campaign, has been brutal, vulgar.” 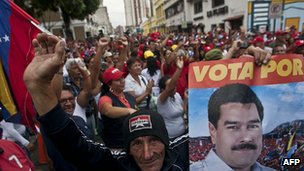 Supporters of both men have taken to the streets in protest

Analysts say there is nothing new in Venezuela’s official rhetoric against the United States.

The late President Hugo Chavez frequently criticised what he called US imperialism.

His chosen successor, Mr Maduro, appears to be following in his footsteps.

Shortly after the death of Mr Chavez, Venezuelan officials said they would set up an inquiry to investigate suspicions that he had been murdered by foreign agencies.

Oil Minister Rafael Ramirez told the BBC that the United States and Israel were to blame for Mr Chavez’s death.

For his part, Mr Maduro said that one day a scientific commission would prove that Mr Chavez’s cancer had been “injected by imperialist forces”.

He has also accused the US government of orchestrating and funding the post-election protests in co-ordination with Venezuela’s opposition whom he describes as the bourgeoisie, the oligarchs.

Venezuela and the United States have not had ambassadors in each other’s capitals since 2010.