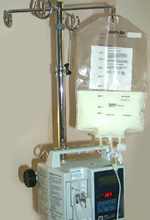 An Indiana woman is fighting with the state of Florida to get her dying, HIV-positive daughter released from the Broward Correctional Facility. However, Jessica Bussert says the state is refusing to release her 27-year-old daughter Betsie Gallardo and also is withholding intravenous nutritional support.

“A person in the prison medical system told me that the reason that they hadn’t started TTN (nutritional treatment) is because the forgone conclusion was that she was going to die and it would prolong her suffering. It didn’t seem she was suffering to me when I saw her the other day,” said Bussert in a phone interview. “I bet she would like another day to live.”

Gallardo was convicted in 2008 of battery on an officer and resisting arrest. Her crime, according to a letter Bussert sent to the Indianan based LGBT blog Bilerico, was that she is HIV-positive and spit on a police officer during a traffic accident investigation.

Bussert says her daughter was adopted from Haiti, along with her sister. While living in Haiti, she says, her daughter was regularly sexually abused by a police officer. When the police showed up at the scene of her car accident, she had a traumatic flashback to that sexual abuse.

The case is one of many nationally where HIV-positive persons have faced significant criminal penalties for engaging in actions which do not spread the virus. In Michigan, Daniel Allen of Clinton Township faced bio-terrorism charges after allegedly biting a neighbor during a fight. A Macomb County Circuit Court judge ultimately rejected the criminal charges saying there was no evidence that spit from an HIV-positive person was a bio-weapon.

Bussert says the charges and the subsequent prison term were the result of her daughter’s race, poverty, national origin and HIV-positive status.

“Anyone with a brain knows, the virus doesn’t get transmitted that way (through spitting),” Bussert said. “If I held a super squirter up and shot a cop with it would I be arrested for shooting the cop with something that looked like a deadly weapon?”

According to Bussert, her daughter developed gallbladder cancer which spread to her colon and a complication of it was the development of an inoperable tumor which has completely blocked her daughter’s intestines, preventing her from eating. Intravenous nutritional fluids could be given to Gallardoto prolong her life, her mother argues.

Asked if she is angered by the different treatment her daughter is receiving over that of Terri Schiavo in 2005, Bussert was very clear she was upset.

Schiavo’s case became the center of a national firestorm in 2005 when pro-life activists attempted to thwart the decision by her husband to remove a feeding tube that was keeping Schiavo alive. The case lead then-President George W. Bush to intervene, and the Congress passed legislation directed at stopping the removal of the tube. The courts ultimately upheld Schiavo’s husband’s right to remove the feeding tube.

Bussert, who is awaiting to take her state boards in nursing, says she is prepared to provide end of life services for her daughter, if the state of Florida will release her on compassionate grounds. She says she has already arranged for hospice services in Indiana, and if Gallardo is unable to travel, she has also arranged care in Florida.

“This is my daughter,” Bussert said. “She is a first-time offender. Let her come home with her family.”

Bil Browning at Bilerico reports the Florida Department of Corrections released the following statement on the situation:

“We are acutely aware of Betsie Gallardo’s situation. The department recommended Inmate Gallardo for a conditional medical release in October which was turned down by the Florida Parole Commission. Yesterday we received a request from the Parole Commission for an updated medical report for their February meeting. Betsie is allowed visitors in the infirmary and her parents visited on Tuesday and Wednesday of this week. Broward CI Warden Jennifer Folsom said that if the parents wish to see this inmate, they need only call the Warden’s office and they will be allowed for visit her and they have been in the past. We will make sure the Parole Commission has whatever they need to make their determination.”

Without nutritional supplements the state is refusing to administer for Gallardo, she will likely have starved to death by the time the February meeting rolls around.