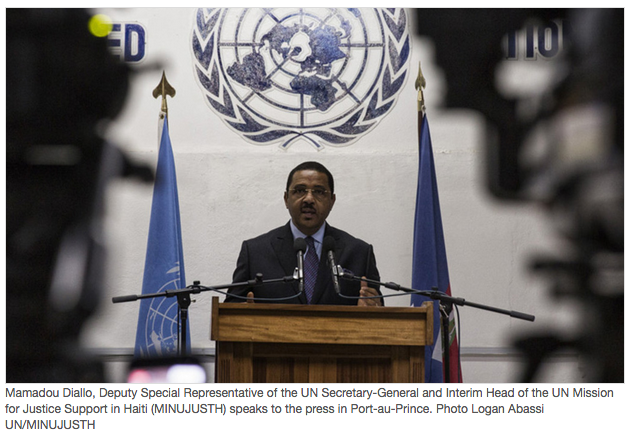 25 October 2017 – The United Nations will remain side by side with Haiti on the country’s path to sustainable development, the Organization’s senior official in the island nation has said.

“Haiti is one of the 193 countries that have adopted the Sustainable Development Goals (SDGs) and has set itself the goal of becoming an emerging country and economy by 2030,’ Mamadou Diallo said Tuesday in his first press conference as the Secretary-General’s Deputy Special Representative of the UN Mission for Justice Support in Haiti (MINUJUSTH).

“Not only are these objectives possible, but they represent the commitment of Haiti with its children and grandchildren for a better future, and the United Nations will remain side-by-side with Haiti on this path,” he told reporters in the country’s capital, Port-au-Prince.

Regarding MINUJUSTH, which began its mandate on 16 October 2017, he said the operation represents a new window of opportunity to foster sustainable development in the country.

“MINUJUSTH [can assist the country] to consolidate the political stability achieved during the last years towards a democratic, stable and prosperous future for all Haitians,” he stated.

Mr. Diallo called on Haiti’s youth and women to help address the challenges facing the nation.

“I would like to stress that the United Nations regards youth and women as a priority sector of the population and driving forces for the country’s development,” he emphasized.

In his capacity as UN Humanitarian Coordinator and Resident Coordinator, Mr. Diallo affirmed that the UN system in Haiti remains engaged with the Haitian people to provide humanitarian assistance and support development.

“Nevertheless, the UN’s priority and approach will strengthen the resilience of institutions and the population to better prevent, respond to and overcome external shocks and humanitarian situations. We are convinced that this is the way to gradually reduce the need for humanitarian assistance and build a solid foundation for development,” he explained.

SUSTAINABLE DEVELOPMENT is the new buzz word for the UN.

Seems to say something, but means nothing.

More billions down the toilet for nothing other than the end to this program … followed by another with another buzz word.