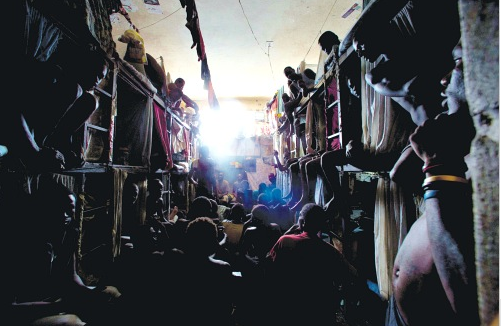 In this February 13, 2017 photo, prisoners cram shoulder to shoulder to watch TV in their crowded cell inside the National Penitentiary in downtown Port-au-Prince, Haiti. (Photo: AP)

“The recurrent lack of food and access to medical care combined with overcrowding, confinement and poor sanitation and hygiene are unacceptable,” she said.

Media reports in Haiti stated that the detainees live in disreputable conditions with no toilet in the cells forcing prisoners to use polystyrene containers and throwing them out of the windows. They also report a lack of lighting, ventilation and that the overpopulation is such that it is not uncommon for four detainees to share a bunk.

In addition to the shortage of food, the water is unsuitable and causes skin diseases, itch, scabies, diarrhoea and cholera.

The detainees also complain of the presence of rats and various insects in the cells, which they said promote the spread of certain diseases, resulting in healthy inmates often falling ill.

Last year 53 people died in detention and the authorities have acknowledged that the 14 deaths in January were due to anaemia, severe anaemia, cardiorespiratory arrest, respiratory distress, pulmonary tuberculosis, hypovolemic shock and gastroenteritis.

In a statement, the Trinidad-born diplomat said that the MINUSTAH had earlier indicated that it is the responsibility of the State to ensure respect for the rights of prisoners and access to basic services.

“Despite the many calls made by the United Nations, the government is slow to take appropriate and sustained action to combat this problem. The Special Representative of the Secretary-General of the United Nations reiterates her appeal to the Haitian authorities to take urgent measures in response to this situation.”