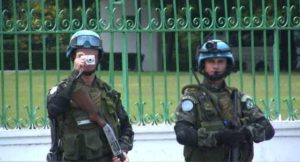 One case involves U.N. police officers in the Haitian capital of Port-au-Prince, Nesirky said. They have been removed from duty while under investigation, he added. The second case involves one or more members of a police unit in the northern city of Gonaives.

Nesirky did not release the nationalities of the police or provide any other details.

“The United Nations is outraged by these allegations and takes its responsibilities to deal with them extremely seriously,” Nesirky said.

He said the organization’s mission in Haiti alerted U.N. headquarters in New York last week about the allegations.

The new charges of abuse come just months after six Uruguayan troops with the U.N. peacekeeping force in the Caribbean country were accused of raping a young Haitian man. That case has been referred to the Uruguayan judicial system.

Allegations of abuse have dogged U.N. peacekeeping missions since their inception over 50 years ago.

The issue was thrust into the spotlight after the United Nations found in early 2005 that peacekeepers in Congo had sex with Congolese women and girls, usually in exchange for food or small sums of money.

The U.N. peacekeeping department instituted a “zero tolerance” policy toward sexual abuse, a new code of conduct for its more than 110,000 peacekeepers deployed around the world, and new training for officers and all U.N. personnel.

Among the key reasons that Ban Ki-moon won U.S. backing to become U.N. Secretary-General in January 2007 was his pledge to restore the U.N.’s reputation — battered by corruption in purchasing and sexual abuses by peacekeepers — through effective oversight.