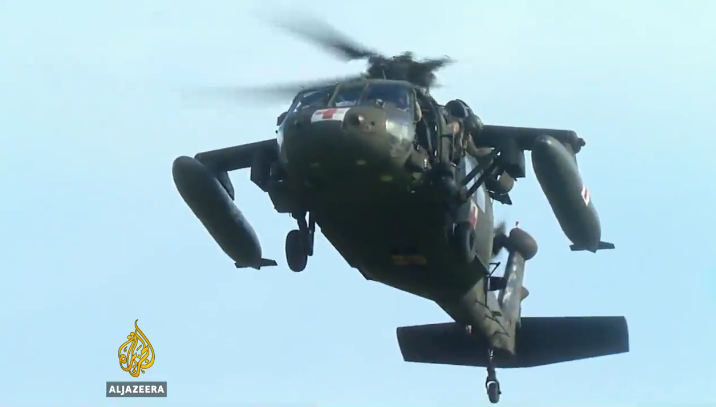 PORT AU PRINCE, Haiti — The head of U.S. Southern Command said Saturday that he expects the U.S. military’s role in the aid mission to Haiti to wrap up in the next four days after delivering hundreds of thousands of pounds of rice and medical supplies.
“What your beginning to see is a transition as the civil authorities, [non-governmental organizations] and other entities get in, get on the ground … and deliver life-saving goods,” said Adm. Kurt Tidd, SOUTHCOM’s commander. “We’re kind of at that natural point where the demand signal on us is going down as their picking up the load.”
Tidd said the aircraft that have been in country since Oct. 5 will begin winding down and the airlift duties will shift to the 11 helicopters on the amphibious assault ship Iwo Jima — a mix of CH-53 Sea Stallions, MH-60S Knighthawks and MV-22 Ospreys.
Task Force Bravo — with a mix of HH-53 Super Stallions, HH-60 Black Hawks and Chinooks — has been working from dawn till dusk for more than 11 days. On Oct. 3, the Task Force moved from its station in Honduras to Grand Cayman, about 600 miles west of Haiti, and by Oct. 5 its troops were moving rice and medical supplies to the most affected areas.
“We were told to prepare for a two-week mission, and from what I’m told we are getting close to that point now,” Tidd said. “I’ll make the decision when the time is appropriate. When we get to the 19th I think we will be at the point where we can say, ‘Mission complete.’ That’s what we’re aiming at right now.”

Navy Times
U.S. relief to Haiti ramps up as Iwo Jima begins humanitarian flights
Task Force Matthew swelled to more than 2,200 troops Wednesday with the arrival of Iwo Jima. For the past 11 days, 400 troops camped out at the unfinished domestic terminal have moved hundreds of thousands of pounds of rice and beans and medical supplies from pallets provided by the World Food Program and other assorted government and nongovernmental organizations.
The mission, led by the U.S. Agency for International Development, was winding down by Saturday as roads damaged by the storm were cleared and made passable for ground-based transportation of relief supplies.
The military’s role after providing the initial disaster response is part of the the rhythm that USAID and the Defense Department have forged in recent years, said Jeremy Konyndyk, who is leading the U.S. response to Hurricane Matthew.
“DoD doesn’t need to be out here forever,” Konyndyk said. “We bring them out where they have unique capabilities to fill gaps in the response. As those gaps are filled by civilian actors and local market forces, then the rationale for DoD being here starts to decline and that’s normal. … So DoD comes out on the front end, gives a real big push for a couple of weeks, gets some momentum and helps us get the response rolling, and then the civilians step up and we’re able to send DoD home.”
For his part, Tidd said he’s pleased with how his troops performed on a short-notice mission.
“What is always gratifying to see is when you pull together a disparate team of people coming from all over the country as well as those in theater, they come together, they work together, they coordinate in a very seamless manner,” Tidd said. “This is joint operations at its finest.”