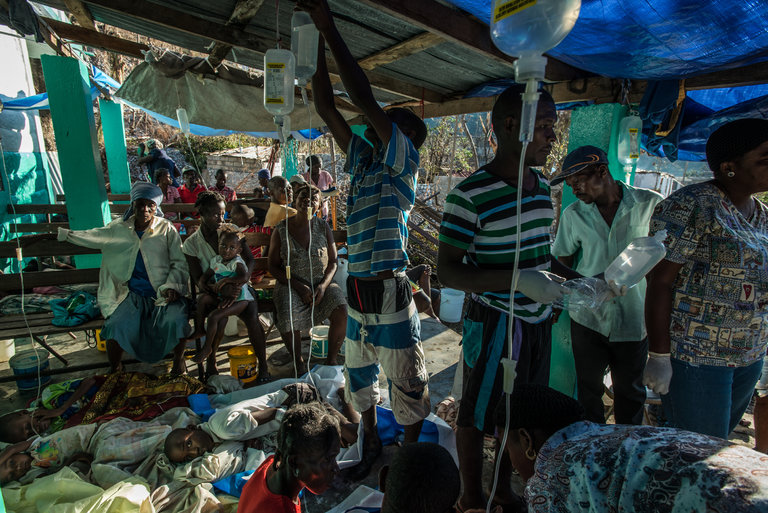 A small clinic in Rendel overflowing with cholera patients last year. The disease was first brought to Haiti by United Nations peacekeepers sent to the country after the 2010 earthquake. Credit Meridith Kohut for The New York TimesEven as the United Nations expresses growing alarm over a cholera outbreak in war-ravaged Yemen, the organization is increasingly worried about the fallout from a stubborn cholera scourge in Haiti that was caused by its own peacekeepers more than six years ago.

A $400 million voluntary trust fund for Haiti to battle cholera was created last year by Ban Ki-moon, then the secretary general, when he apologized for the United Nations’ role after having repeatedly denied any responsibility. But the fund, meant in part to compensate cholera victims, garnered only a few million dollars and is now nearly empty.

Entreaties by Mr. Ban’s successor, António Guterres, for charitable contributions have gone unanswered. Moreover, a proposal announced on June 14 by Mr. Guterres’s office to repurpose $40.5 million in leftover money from the soon-to-be disbanded peacekeeping mission in Haiti for use in the cholera fight has faced strong resistance from other countries.

Without an immediate infusion of funds, warned his deputy secretary general, Amina J. Mohammed, “the intensified cholera response and control efforts cannot be sustained through 2017 and 2018.”

And on Friday, United Nations officials were served with a reminder that their effort to shield the organization from Haiti cholera lawsuits by asserting diplomatic immunity might not necessarily work. In papers filed in Federal District Court in Brooklyn, the lead lawyer for Haitian victims challenged a request for dismissal of their case by the Justice Department, which acted on behalf of the United Nations.

The arguments by the lead lawyer, James F. Haggerty, differed from those in a separate lawsuit filed by the Institute for Justice and Democracy in Haiti, an advocacy group, which argued that the United Nations had failed to give victims a way to settle their grievances. A federal appeals court dismissed that suit last August at the Justice Department’s request.

The Justice Department has until July 7 to respond to Mr. Haggerty’s filing, which argues that the United Nations established as far back as the 1990s that it was legally liable for damages caused by negligence from peacekeeping operations.

Acceptance of that liability, Mr. Haggerty said, was the same as waiving immunity under the treaty the United Nations has invoked as protection, known as the Convention on the Privileges and Immunities of the United Nations.

That treaty, he said, “should not be a shield to hide behind because the United Nations (or the U.S. government) doesn’t like the price tag that comes with the U.N.’s indisputable gross negligence in this case.”

United Nations officials indicated on Monday that they expected Mr. Haggerty’s lawsuit to be dismissed as well. “Our legal position remains the same,” said Stéphane Dujarric, a spokesman for Mr. Guterres. “Our focus is on combating cholera and assisting impacted communities.”

Roughly 10,000 Haitians have died and nearly a million have been sickened since cholera was introduced into Haiti in 2010 by infected United Nations peacekeepers from Nepal. Studies showed the cholera bacteria came from poor sanitation by the peacekeepers.

The United Nations never acknowledged it was at fault, and even when Mr. Ban apologized last December for its failure, he worded the apology to avoid any mention of who had brought the cholera to Haiti, the Western Hemisphere’s poorest country.

Mr. Ban’s solution was to create the $400 million voluntary trust fund — in effect, a charitable gesture to show good will and demonstrate what he called a “moral responsibility” to make things right in Haiti.

Haitian anger over the cholera issue was clear last week when the United Nations Security Council visited Haiti before the planned October dismantlement of the peacekeeping mission, which has been deployed there for 13 years. Hundreds of protesters demonstrated outside the mission’s base.

Critics of the United Nations have argued that its response to Haiti’s cholera crisis remains deeply flawed, with no guarantee of ever redressing victims as long as donations are voluntary.

Beatrice Lindstrom, a lawyer at the Institute for Justice and Democracy in Haiti, said that “until the U.N. makes good on its promise to fund cholera elimination and remedies for victims, it will keep having to contend with legal challenges and public relations nightmares.”