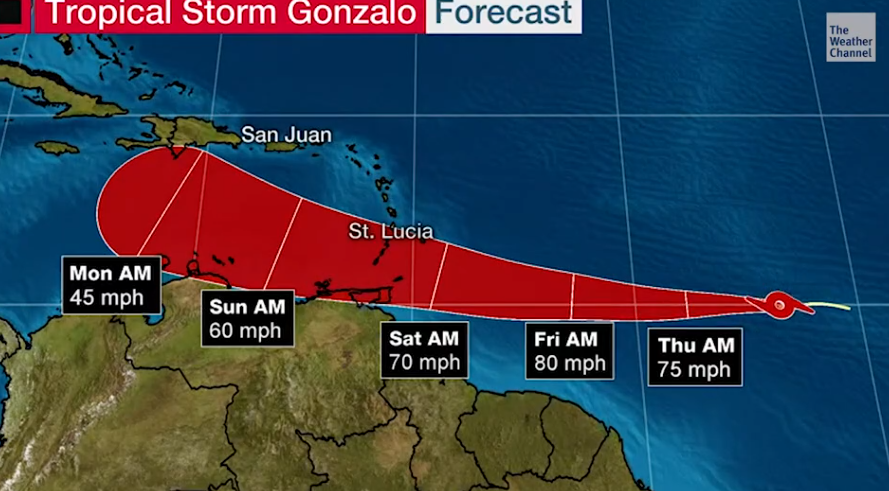 This system is located well over 1,000 miles east of the southern Windward Islands, moving west.

Gonzalo became the earliest seventh named tropical storm on record to form in the Atlantic basin, according to Phil Klotzbach, a tropical scientist at Colorado State University. The previous record was held by Tropical Storm Gert, which developed on July 24, 2005.

Gonzalo’s tiny size and the environment around it pose a major forecast challenge for its future intensity.

Dry air is currently plentiful to the west and north of Gonzalo, which is one factor that can weaken and disrupt tropical cyclones.

While shearing winds are currently not near Gonzalo, it may encounter some modest wind shear as it nears the Windward Islands this weekend.

These factors would argue for a weakening of Gonzalo by the time it nears the Windward Islands Saturday.

However, there is an ample supply of warm, deep ocean water ahead of Gonzalo, and they’re generally warmer than average for this time of year.

Furthermore, Gonzalo is a tiny tropical storm. Small tropical storms like this can intensify quickly in the right conditions, but they can also succumb to unfavorable conditions more quickly than a larger storm. In other words, they can strengthen and weaken much more and at a faster rate than expected.

So, the range of outcomes for the intensity forecast is large, anywhere from this storm remaining weak or dissipating east of the Windward Islands, to a possible hurricane.

Fortunately, the track forecast is a bit more straightforward. We expect a general west-northwest track into the Windward Islands by Saturday, then into the eastern Caribbean Sea by Sunday.

Interests in the Lesser Antilles, including areas as far south as Trinidad and Tobago, even the northern coast of Venezuela, should monitor the progress of this Gonzalo closely.

First of the Main Development Region

Gonzalo is the first tropical storm this season to form in the so-called “main development region” of the Atlantic Ocean between Africa and the Lesser Antilles.

(MORE: The 2020 Atlantic Hurricane Season is Off to a Busy Start, But That’s Not the Whole Story)

It’s a sign we’re headed toward the prime months of the hurricane season, when tropical storms and hurricanes can form not just in the Gulf of Mexico, off the Southeast coast or western Caribbean Sea, but also in this main development regionand take long tracks through the Atlantic Basin.

The Weather Company’s primary journalistic mission is to report on breaking weather news, the environment and the importance of science to our lives. This story does not necessarily represent the position of our parent company, IBM.