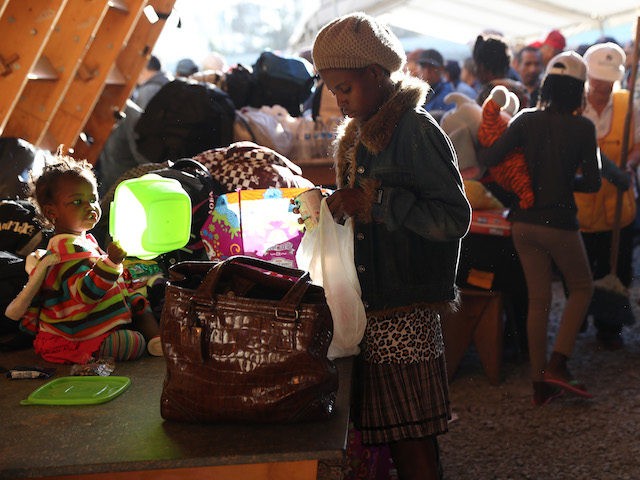 Jean Guerrero, our partners at location station KPBS Fronteras reporter, has the story.

JEAN GUERRERO: The surge of Haitians started in May. U.S. customs officials couldn’t process them fast enough, and a backlog formed in Tijuana. Here, shelters like Desayunador Salesiano have had to improvise spaces for the migrants, as they wait for their turn to cross into the U.S.

The destruction wrought by Hurricane Matthew about two months ago has left these Haitian migrants more desperate than ever.

LEONARDO MARTINEZ, Desayunador Salesiano Coordinator (through translator): They have family members who’ve suffered, and their concern is to help them from here, or from the United States.

JEAN GUERRERO: One of those Haitians is Frederic Saint Cois, whose family in Haiti survived the devastating floods. But he wants to send them money so they can get by in the newly ravaged country. He hopes to find a job in the U.S.

JEAN GUERRERO: He said he spent a lot of money to make it this far, as did his fellow travelers. The journey involved long walking stretches, bus travel and more through some of Latin America’s most dangerous countries.

FREDERIC SAINT COIS (through translator): I saw many, many people die.

JEAN GUERRERO: That’s why sudden shifts in U.S. immigration policy have left him so bewildered. Since the 2010 earthquake, the U.S. has been letting Haitians in under a humanitarian parole provision.

But a few weeks ago, responding to the overwhelming influx of migrants, the U.S. revokes that privilege. The decision to resume deportations was motivated by improved conditions in Haiti. But Hurricane Matthew struck a few days later, plunging the country back into crisis. Even so, officials continued detaining and deporting new Haitian arrivals. But recent overcrowding in detention centers have led officials to allow some Haitian migrants to enter the U.S.

Among the Haitians who managed to cross into the U.S. before the policy changes is Sandra Alexandre, whose baby was born hours after she crossed the border. The baby’s father, Volcy (ph), missed the birth and still hasn’t met his daughter. He was supposed to cross a few days after Sandra, right when the policy shifted. When he crossed, he was placed in an immigration detention center. He still hasn’t been released.

SANDRA ALEXANDRE, Haitian Migrant (through translator): It’s very difficult for me and for the baby. I don’t know when he’s going to come here.

JEAN GUERRERO: Alexandre says she wishes she’d known the policy was going to change before making the dangerous trek through Latin America with her fiance, while she was nine months pregnant. Many times she almost gave up.

SANDRA ALEXANDRE: I was like, “it’s too difficult, I won’t make it,” but Volcy said, “Yes, you can make it. Little by little, but you’re going to make it. Be brave.”

JEAN GUERRERO: She says she can’t go back to Haiti.

JEAN GUERRERO: In the meantime, Tijuana residents are responding to Haitians with unusual hospitality. All day, they stop by the migrant shelters where Haitians congregate, giving away clothes, dropping off snacks like sandwiches and sports drinks, even preparing full meals.

JANETH AGUILAR, Tijuana Resident (through translator): We come every day with them. We bring them candy, food. We’re with them a little while. Yesterday, they braided my whole head of hair.

JEAN GUERRERO: She remembers when she first saw the large crowds of Haitians on the streets. It was an unusual sight — only about 1 percent of Mexico’s population is black.

Aguilar went online to find out what was happening. She learned that the migrants were coming from countries with political and economic crises, and she wanted to help.

JANETH AGUILAR: We come to give them a happy moment. Since they lack everything, we want to make sure they don’t lack a smile.

JEAN GUERRERO: The streets of Tijuana have long been filled with migrants heading to the U.S., as well as the deported — mostly from southern Mexico and Central America. Those migrants are often shunned by the locals, forced to live out of sight, in sewers. When Tijuana residents recently set up a table on the street, offering fried chicken, rice and beans to the Haitians, a Mexican migrant got in line. Jorge Cruz, a Tijuana taxi driver who brought the chicken, was not happy about that.

JORGE CRUZ, Taxi Driver (through translator): I told him, “You’re Mexican, what do you lack?”

JEAN GUERRERO: Despite the warm welcome in Mexico, the Haitians are intent on making it into the U.S.

FREDERIC SAINT COIS (through translator): I have faith in Christ, in God. God is always helping me.

JEAN GUERRERO: He knows he might be placed in a detention center and deported. But that’s not going to stop him from trying, and hoping.

For the “PBS NewsHour”, I’m Jean Guerrero in Tijuana, Mexico.