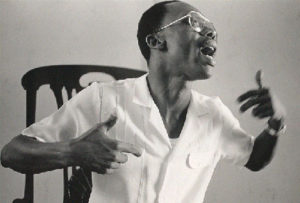 Thousands of people joined Thursday’s protest, marching through the streets of Port-au-Prince to complain mainly about the higher cost of living.

It was one of the biggest demonstrations against the administration of President Michel Martelly this year. The crowd consisted of supporters of former President Jean-Bertrand Aristide and opposition lawmakers.

The march began peacefully but ended as protesters approached the presidential grounds. Police fired warning shots and tear gas canisters and a small group of protesters set fire to barricades made of tires.

The protest happened on a national holiday known as Jean-Jacques Dessalines day, honouring one of Haiti’s founding fathers.

COMMENT: HAITIAN-TRUTH.ORG
Aristide spent another fortune to have marchers mount a protest against the Martelly government.

This time he managed to gather something close to 3,000 people on the streets of Port-au-Prince,  on Dessalines Day – offset by the spontaneous crowd of over 20,000 President Martelly drew in his appearance in Haiti’s north on the same day.
There is – yet again – another message here.

No matter how much Aristide, and his band expend, they cannot mount an effective protest against the popular Martelly government.