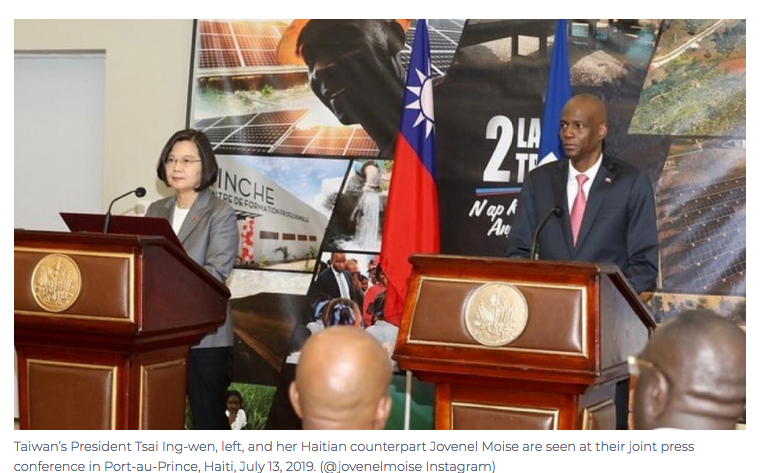 WASHINGTON/PORT AU PRINCE, HAITI – Taiwan’s President Tsai Ing-wen made a quick visit to Haiti Saturday during which she expressed her hopes for peace and stability in the Caribbean country.  During the four-hour stop, which included the official opening of a Taiwanese product expo and a visit to the national museum  – Musee du Pantheon National – the Taiwanese leader made no new announcements but rather reiterated her country’s support for her host, President Jovenel Moise and the bilateral projects already in place.

“During my visit here in Haiti I personally witnessed President Jovenel Moise’s ardent desire to achieve national development and I hope with all my heart that Haiti will see political and social stability,” Tsai said.

Taiwan’s leader, who arrived in Port-au-Prince with a delegation of officials including three parliament members, the president of the private business sector association and Taiwanese entrepreneurs, said she hoped the two countries would be able to cooperate in new areas in the future.

The two leaders, who have both recently experienced massive protests demanding they resign, met for about 20 minutes, then held a joint press conference at the National Palace.

“At a time when my country is confronting numerous difficulties especially as it pertains to development, Taiwan remains a model ‘par excellence’ of long lasting economic results which can be achieved in a country like ours as it strives toward growth and the creation of massive employment,” Moise tweeted after the visit.

Moise said among the joint projects already in place are several seeding centers in the Northeast, in the Artibonite agricultural region, 20 solar-powered systems which will be used to irrigate 2,000 hectares across the northeast, Nippes in the Northwest and the Artibonite in the south. There is also a plan to bring electricity to some towns.

“Apart from the bilateral agreements that already exist, we hope to be able to develop new areas of cooperation such as education, commerce, infrastructure and others,” Tsai said.

Moise was more specific and said there were five prospective areas where Taiwan and Haiti could cooperate in the future.

“There’s infrastructure for roads, agriculture, mass transport, affordable housing and a port in the northwest,” he said, adding “to bring these projects to fruition we must have serenity, peace and peace of mind.”

Haiti is the first stop on Tsai’s 12-day tour which began on July 11 and includes visits to four countries.  Taiwan is looking to boost ties with Caribbean allies at a time when China is making inroads in the region.

The Dominican Republic, which broke off ties with Taiwan in 2018 in favor of China has been offered $3 billion in loans from Xi Jinping’s government according to reports.

Meanwhile, Taipei’s $150 million loan to Haiti for electrical projects has not been disbursed because the Haitian parliament has not yet approved it.

“Taiwan is a loyal friend and partner to Haiti and we will accompany Haiti on its road toward development,” Tsai said, adding that she hopes her visit will contribute to the continuation of more bilateral exchanges in the future.

The visit got mixed reviews on social media.

“When will these projects launch, because I want to work president,” @wadda.m17 commented on VOA Creole’s Instagram page.

“Hmmm… I always hear about projects other countries are coming to launch but they never go anywhere,” @cleverboy_dabright commented.

Tsai’s next stop was St. Kitts and Nevis, where she landed Saturday night for a four-day visit, the first ever by a Taiwanese president. She will also visit St. Vincent and the Grenadines and Saint Lucia.