The Government of Taiwan (Republic of China) donated 800 metric tons of rice to the Economic and Social Assistance Fund (FAES), in the presence of the accredited Taiwan Ambassador, Hu Cheng-hao, Bocchit Edmond, Minister of Foreign Affairs and Cults, Charles Ernest Chatelier, Director General of FAES and Monsignor Ogé Beauvoir, Executive Director of Food For The Poor. 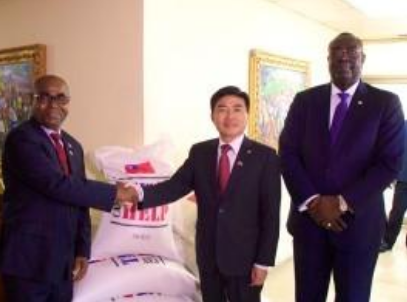 In his speech, Charles Ernest Chatelier, on behalf of the Haitian people, praised the Taiwanese Government’s solidarity drive, which was taking place as the socio-economic situation of the most vulnerable families became more and more precarious. “These families are continually plunged into food insecurity because the accelerated devaluation of the national currency leaves them for only choice to accept helplessly the decline of the basket of the housewife.”

“It is in this spirit, in my capacity as Director General of the Economic and Social Assistance Fund (FAES) and on behalf of the Haitian State, that I formally receive 800 metric tons of white rice offered by the Republic of China Taiwann,” aadding “This donation demonstrates the commitment of the Taiwanese Government to accompany the Haitian people in their search for an improvement in their situation and is a start of rapid and urgent response to the problem of hunger.”

He also said that this donation in kind will not be monetized but was intended to supply the “Kore Pèp” program.

While thanking, on behalf of the Haitian State, the Government of Taiwan for this doantion, Chatelier, took the opportunity to remind the audience that alongside these programs of social assistance, Taiwan also supported the Haitian state in the implementation of infrastructure and capacity building programs of the country to provide durable solutions to the various problems facing Haiti.

Charles Ernest Chatelier did not fail to send his warmest thanks to Bishop Ogé Beauvoir, who facilitated the various operations related to the supply of this donation.