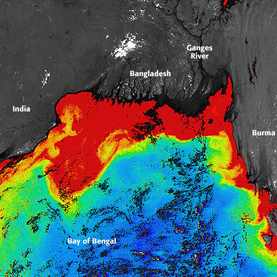 Measurement of chlorophyll, sea-surface temperature and sea-surface height are being used to track the stubborn waterborne disease’s next moves.

BOSTON – The world has seen seven global cholera outbreaks since 1817, and the current one seems to have come to stay. Rising temperatures and a stubbornly persistent, toxic bacteria strain appear to have given the disease the upper hand.

Public health officials are working on vaccines, struggling to improve sanitation in impoverished nations and grasping for ways to predict the outbreaks. One team of researchers has proposed attacking the pandemic using a combination of high- and low-tech: Satellites and sari cloth.

Where the previous pandemics lasted five to 25 years, this one started in 1961. “We are in the fiftieth year of this and it shows no evidence of abating. If anything, it’s revving up,” said Edward T. Ryan, director of tropical medicine at Massachusetts General Hospital. “We are in this for the long haul.”

The pandemic began in Indonesia, stormed into South America in 1991, and has regularly burst out in lethal episodes. The earthquake in Haiti in 2010 opened the door to an outbreak that has killed approximately 5,000 people. In Zimbabwe, nearly 10,000 died between 2008 and 2009. Spikes in the disease have hit Vietnam, Angola, Sudan, Somalia, and followed widespread flooding in Pakistan.

“We are seeing these prolonged outbreaks lasting months and years,” said Peter Hotez of the American Society of Tropical Medicine and Hygiene, based in Chicago.

Regular mutations of the cholera bacteria have produced a strain that is more toxic and tenacious than researchers say they have ever seen.

Cholera can bring a quick and nasty death. The disease can strike within 24 hours of the bacteria entering a person’s intestines, creating massive diarrhea that quickly empties the body of fluids, bringing dehydration and shock. If a severely infected person cannot make it to medical care very quickly, there is a roughly 50 percent chance of death.

Rita Colwell, the former head of the National Science Federation, has been tracking outbreaks of cholera for decades. Now 77, she was awarded the 2010 Stockholm Water Prize for her work on cholera and is recognized as the sleuth who found where cholera hides between outbreaks.

Cholera fatalities are “totally needless,” said Colwell, a professor at the University of Maryland and John Hopkins University’s Bloomberg School of Public Health.  Quick treatment with simple salt and sugar fluids reduces the disease’s mortality rate to less than one percent.

The disease is typically spread when cholera bacteria contaminate drinking water, or when people eat contaminated fish or shellfish. In countries with poor sanitation, the disease can spread so quickly that local health authorities are caught unprepared and are overwhelmed.

Colwell helped unravel some of the mysteries of cholera’s sporadic incidence in the late 1960s. She discovered – in, most unexpectedly, the Chesapeake Bay – that cholera bacteria can reside in a dormant state in tidal waters and estuaries. It multiplies when an increase in water temperature brings a bloom of phytoplankton and zooplankton, to which the bacteria attaches.

In turn, high seas, heavy rains or flooding can mix infected waters with fresh water, pushing the disease inland and prompting an outbreak in areas with poor water sanitation systems. It had not been noticed in the Chesapeake Bay region because drinking water is treated.

“Rita deserves the ultimate credit for looking for the reservoirs of cholera since the 1960s, and finding it,” said Paul Epstein, associate director of the Center for Health and Global Environment at Harvard University.

Having discovered the hideout of the bacteria, Colwell and others have been trying to predict when it will break out. Colwell found that measurable changes in the sea often will proceed an epidemic by about six weeks. That has led her to advocate use of modern technology.

“We’ve been very fortunate in that the sensors on satellites allow us to measure chlorophyll, sea surface temperature and sea surface height. These factors, it turns out, are very useful in predicting cholera epidemics,” she said in a recent interview.

Mohammad Ali, a senior scientist at the International Vaccine Institute in Seoul, last month found that increased air temperatures and rainfall are regularly followed by outbreaks. His study tracked seven years of data in Zanzibar, and the observed data were “very close to the prediction,” he said in a telephone interview.*

“This is the key water-born disease. It’s the biggest threat globally” from climate-induced rainfall and sea-level rise, he said. Better prediction “could save a lot of lives.”

But prediction is only half the battle, Colwell acknowledges. If conditions are ripe for an outbreak, local health officials must spring into action. Two vaccines exist, but they require two doses that make them impractical once an outbreak has begun. Colwell notes that in underdeveloped countries, with very limited resources, the simplest measures are often the only ones available.

In Bangladesh between 1999 and 2002, she encouraged women who haul drinking water to pour it through a folded, inexpensive sari cloth – similar to a cheesecloth. That simple step cut the incidence of cholera by more than half, she found.

Doug Struck covered climate change issues for The Washington Post. He is now a freelance writer and associate chair of journalism at Emerson College in Boston. DailyClimate.org is a nonprofit news service that covers climate change.

*Editor’s Note (07/07/11): This sentence was modified after publication to correct a mischaracterization of Ali’s study.