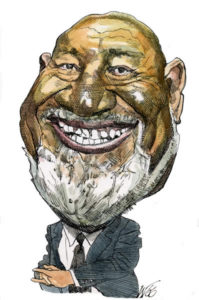 This Sunday, at a retirement home in Belle Glade, Florida, a United States congressman threatened the life of his opponent in front of an entire group of senior citizens.  For those familiar with the entitlement mentality that has so sullied the left, the party of the esteemed Congressman can be left without saying.  For all others, I’ve included it in the title.

Sunday’s riff was par for the course with Alcee Hastings.  During the 2008 cycle (three days before the election), Democrat Hastings, a member of Congress since 1993 and the only impeached judge ever to be elected to higher office, brought up his own impeachment in a public forum, all but proclaiming it to be a badge of honor.  His opponent at the time, former state Chief Medical Officer Marion Thorpe, being a quintessential gentleman, didn’t engage him head on, but instead reminded the audience that Hastings impeachment had precluded him from being an effective voice on issues affecting his district.

Alcee went ballistic.  Although it was he, not his opponent, who had brought up his own impeachment, Hastings approached Thorpe after the debate and told him (among other things not fit to print), you ever bring up that impeachment again and I’ll take you out.  The two then sat down and let the candidates for state attorney take the stage, Alcee’s threats having almost been within earshot.  Alcee was soon at it again, finishing off the evening by standing up, waving his finger at Thorpe and hissing it ain’t over, it ain’t over.  I’m coming after you.

Hastings reward for that most comical charade was reelection to a ninth term in Congress.  To be sure, he doesn’t have much clout and Pelosi et al made him Chairman of the Helsinki Commission, to make sure that he spends most of his time amusing the good folks of Europe, doing his best to bolster our national image.

(Details of the above incident are available online at The entire incident is available at http://www.nationalreview.com/corner/172989/opponent-accuses-rep-alcee-hastings-threatening-his-life/mark-hemingway Of note, I was in the room when it happened, albeit not close enough to hear Alcee‘s gracious and poetic threats.)

That episode was mild and pales in comparison to what happened this weekend at Quiet Waters Retirement Home, a Belle Glade, Fla. nursing home that will be quiet no more.

Alcee Hastings arrived with Kendrick Meek and the media.  Kendrick gave a good speech and left, the media following suit.

Alcee’s Republican opponent, diplomat, community leader and renown human rights activist Bernard Sansaricq, was at the home, meeting with residents.  Sansaricq notes that this was after a full day of campaigning and listening to the concerns of constituents in Belle Glade, the poorest area in the state and one with an unemployment rate of 42%.  Surprisingly, while Sansaricq has visited the area 20 times, Hastings had been a no show until that afternoon.

With the media gone, Alcee gave his speech.  Winding down, he turned to his opponent and announced that the Tea Party had invited him to a debate, rebutting I have nothing in common with the TEA parties, so I refused.  At that point, he called out to Bernard to stand next to him and demanded that Bernard debate (him) right here and now. That move would prove foolish, even by Alcee standards.

Alcee, now both the candidate and self-appointed moderator of the debate, continued on about how much he loved Belle Glade, where he grew up (but hasn’t been seen since).  His concluding remarks were that he was an impeached federal judge. He added that he’s now under investigation by the House Ethics Committee, but none of that matters because I represent the people.

Bernard Sansaricq posted accusations on his site that I pay my girlfriend, who is also my staffer, $160,000 a year.  And I have one word for him.  You, Bernard should go find out what I did to my last opponent.  I sued his – expletive deleted – off.

It wasn’t Bernard Sansaricq who broke that story.  It was national news sources, including the ultra-liberal Sun-Sentinel (see http://articles.sun-sentinel.com/2010-03-06/news/fl-congress-spending-20100304_1_budgets-staff-salaries-office-expenses ).

Well, we know what you did to his last opponent.  And just like his impeachment, he may not want to bring it up in public.

You would think that would be enough.  But, Alcee being Alcee, there was more to come.

Bernard Sansaricq is a serious man who cares about the plight of people in Alcee Hastings’ district.  Hastings would have been well advised to leave him well enough alone.  But he didn’t and now it was Bernard’s turn to fire back:

Turning to the audience, the statesman responded:

I have visited Belle Glade 20 times since the beginning of the campaign and I intend on being YOUR Congressman.  And I won’t tell you that you need to hire a lobbyist when you need something from me.  That’s because your congressman is elected to be your lobbyist!

Belle Glade has a 42% unemployment rate.  You can be sure that when elected, I won’t hire some girlfriend and pay her $160,000 of the people’s money when those funds can be used to hire eight people in Belle Glade.  I also won’t take trips to Europe with that girlfriend on the taxpayer dime.  I will remain here and have a presence in the district, fighting for you.

When asked about what had transpired, Sansaricq stated, that was obviously not the speech I had in mind to give.  But since he laid it all out on the table, there was really no choice but to oblige.

Alcee Hastings was right about one thing.  He has nothing in common with the TEA parties, or any other citizens’ movement for that matter.

The most riled up members of our grassroots movements are motivated by a desire to help America realize its potential.  They respect life, liberty and the pursuit of happiness.  Alcee Hastings threatens his opponents and he chases the pursuit of girlfriend staffers.

What’s also true is that Alcee Hastings needs psychiatric help.  As far as being a decision maker or community leader goes, suffice it to say that I’ve met wild armadillos more intelligent than he is.  With 42% unemployment in parts of his district, Florida’s most impoverished one, it’s a shame that they don’t have better representation.

Alcee Hastings is   a disgrace.  Compared to Sansaricq, whose amazing bio cannot be given justice in this article (though readers are encouraged to visit www.sansaricq4congress.org to see for themselves), Hastings appears to be nothing more than a shadow of a man.  And the Democratic Party, even with their pervasive entitlement mentality, should be ashamed to have them as their nominee.