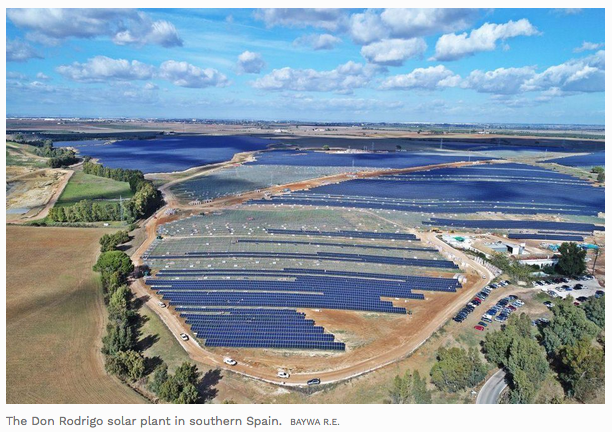 If any project epitomizes the direction of travel of the European solar industry it’s Don Rodrigo. The site in Spain was developed by a German veteran of the sector using largely Chinese tech. It will be owned by a huge institutional investor and the power will be sold to a slightly more traditional energy company that is keen on wind and solar. That story, or a very similar version, will be retold in Europe again and again in 2019.

Those involved with the project have labeled it the first fully unsubsidized, market-driven project in Europe. Its progress has been heralded at every turn with each supplier keen to talk about it and each stage of development declared by its German developer BayWa r.e.

This week Don Rodrigo passed the final of these milestones with the conclusion of its sale to MEAG, the asset management arm of the insurance giant Munich Re.

The 175MW project, south of Seville, uses half a million solar panels and 3000km of cables. These panels were being installed at a rate of 10,000 every day. The project will be a ‘smart’ plant with Huaweitechnology in place to create optimization and data-driven monitoring opportunities. The solar modules themselves are also from two Chinese firms, Astronergy and GCL. Expect more Chinese made solar panels to land in Europe now price floors imposed after a trade row have been liftedand demand in China itself has slowed. Prices were driven down sharply in mid-2018 as a result.

But as is increasingly the case with many utility-scale solar projects right now, the business model is as or more interesting than the technology being used. In this case, optimized and efficient system design, an accommodating local government and the regulatory environment that allows two parties to buy and sell electricity provided the right conditions.

“What is so special about this project is that we will generate green electricity at market prices without any kind of subsidies, a first in Europe. We are therefore entering a new phase where the energy turnaround is concerned: solar power is now cheaper to produce than conventional power,” said Matthias Taft, senior energy executive at parent company BayWa AG.

Electricity from the project will be sold to the Norwegian state-owned hydropower company Statkraft under a 15-year contract.

“The fact that the plant was completed without any delays or complications and its subsequent sale quickly followed is a major success for us. We are planning to generate subsidy-free solar power with similar projects in other southern European countries in the next few years in order to further drive the energy transition throughout Europe,” continued Taft.

In addition to Spain, a number of smaller subsidy-free projects are up and running in Italy and Portugal. The integration of batteries has helped one U.K. sitereach the hallowed ground of unsubsidized solar too with larger projectsin the planning phase there too.