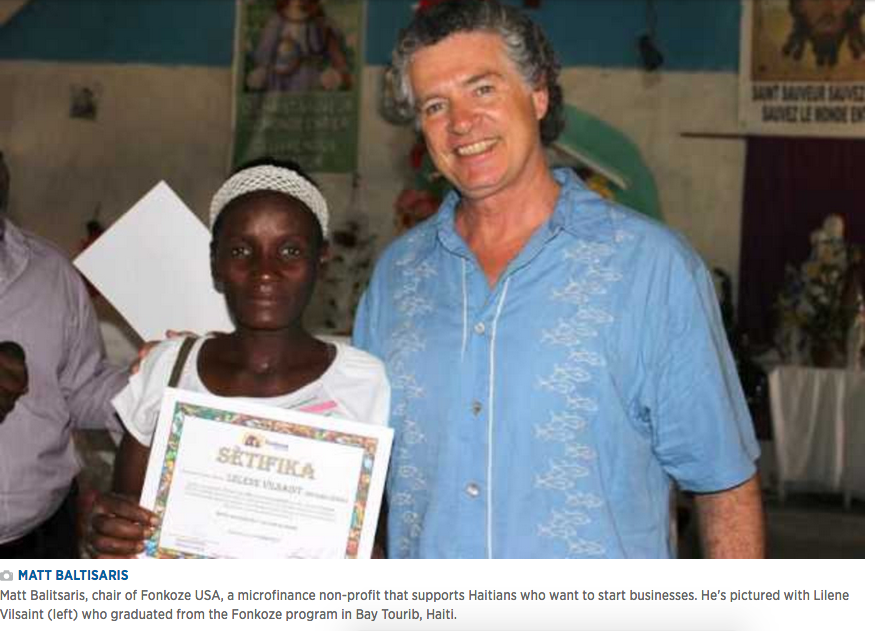 200,000 accounts, with $25 million in savings and $100 million annually in transactions — Fonkoze also functions as a way to transfer money into Haiti from overseas, accepting transfers as a point of service for Western Union and Moneygram. (For more information, visit fonkoze.org).

When Balitsaris joined Fonkoze USA’s board, the organization had roughly 30 branches around Haiti. Today, there are 46 branches.

In 2009, he was elected vice chair of the board, and “concluded I had to get out from under the [record] label. I was excited about what was going on in Haiti,” he said. “I set about the process of selling the label and signed the papers to leave Palmetto about five days before the earthquake in Haiti. It was like walking out one door and into another, and I was totally absorbed by what was going on there.”

He served as board chairman until fall 2015, and since then has been promoting a book about Fonkoze’s work in Haiti and microfinance efforts there titled To Fool the Rain.

“Because of my experience with the record business, I have some familiarity with how the publishing business works. Book distribution and music distribution are structured almost identically, and printing a book and pressing a CD are also similar processes. They are similar in terms of marketing and publicity, as well.”

To Fool the Rain portrays the challenges the ultra-poor routinely face in the developing world. It tells the story of the women who use another Fonkoze program, Chemen Lavi Miyò (CLM), to change their families’ lives.

“The program lasts 18 months, and the women start a couple of small businesses and make their way toward graduation. We have a method that addresses extreme poverty, and we have proven that the method almost always works. Over 95 percent of our families succeed.”

Chemen Lavi Miyò, “the pathway to a better life” in Creole, empowers Haiti’s poorest women to pull themselves and their families from poverty into self-sufficiency, with hope and vision for their future.

Incoming members live on the very margins of rural society, in some of the most extreme poverty in Haiti. They live on less than $1 a day, have multiple children, no assets, and no health care, and suffer from persistent hunger, with no reliable access to food. Fonkoze recognizes that women in such extreme poverty need intensive support and guidance to get a foothold on that first step on its “Staircase out of Poverty.” To begin, CLM gives each member the materials to build a 9-meter-by-9-meter house with a sturdy roof, a stable floor, and a latrine; a water filter; and her choice of two activities to begin earning an income, including raising various types of livestock or selling merchandise.

Balitsaris said the book “is the first … to document the ‘graduation model’ in the field, both the mechanics and the reality of implementing it. This is everyday life, for people all over the world. It is almost inconceivable that the people in this book could live less than two hours by air from Miami. But they, and many, many thousands more, do. And millions more around the world.”