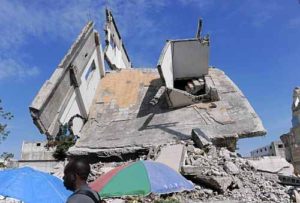 Saturday, January 15, 2011
By Dennis B. Roddy, Pittsburgh Post-Gazette
Michael Henninger/Post-Gazette
A man walks by a collapsed structure Monday on the route to the Doctors Without Borders cholera clinic in Haiti.

PORT-AU-PRINCE, Haiti — American disaster agencies have raised billions of dollars for Haitian relief that remain unspent more than a year after an earthquake leveled thousands of homes and left more than a million people homeless, according to an organization that has monitored and surveyed the disaster response.

“The organizations have not acted with the same urgency that they fundraised on,” said Ben Smilowitz, director of the Disaster Accountability Project, which surveyed more than 100 American relief agencies.

He said he received only 38 responses to the survey and issued a report that shows some of the groups have been sitting on money raised last year. Officials from some of the groups have responded that they are making sure their money is spent on relief in a country where corruption is rampant and the government is on life-support. They also say that with the massive needs of the country, money is being saved to continue work well into the future.

According to the report, the organizations responding to the survey reported receiving more than $1.4 billion for Haitian relief. To date, the groups reported spending $730 million, or only 52 percent. Despite a balance in the bank, Mr. Smilowitz said many groups continue aggressively raising money without a clearly coordinated plan to spend it wisely.

“Groups know that they’re over capacity and instead of being honest about it, they’re asking for more donations. People give based on ads, heart-tugging ads based on emotion,” said Mr. Smilowitz, a former Red Cross volunteer who was removed from his post in the wake of Hurricane Katrina because of critical statements to the press.

The Red Cross was among the agencies that fared poorly in the report. According to the organization’s survey response, the Red Cross received $479 million in donations for Haitian relief last year. As of Dec. 28, it had spent, or had committed to spend less than half of that money by the one-year anniversary of the quake.

The Red Cross also indicated last year that it had earned $90,000 in bank interest on the Haiti donations, money it originally said would be put toward its general operating fund rather than Haiti. The group later said it would direct the money to Haiti relief.

The Red Cross was among the more prominent organizations to receive bad reviews in the DAP report, but it was among only 38 of 100 relief agencies contacted to even respond. About 450 nongovernment organizations, or NGOs, have registered with the Haitian government. Estimates on the number of NGOs operating here range in the thousands.

The Red Cross, which has faced harsh criticism in the past for its post-9/11 and Hurricane Katrina responses, said Thursday that it is understandable for donors to be concerned about making sure funds are used, but said it has longer-term plans and will remain on the ground here until all contributions earmarked for Haiti have been spent.

“Our goal has always been to spend donations wisely and to make sure they have the biggest impact possible,” said spokesman Mat Morgan.

Tracking money and its expenditure has been an especially tricky thing in Haiti, which critics have sometimes referred to as The Republic of NGOs, for the thousands of nongovernmental organizations that have set up shop here and only sporadically coordinate their efforts for maximum delivery.

“Many of these groups are off the grid. You’d have no way of counting. There’s very little compliance of registry with nonprofits here,” Mr. Smilowitz said.

The government has been largely ignored or bypassed by many of the groups. Many of them do not trust the Haitian government because in years past leaders dating to the days of the Duvalier dictatorship have pocketed millions in foreign aid intended for this country’s poor.

The situation became even more complicated last year, when the Haitian government ordered relief agencies to halt food distributions at the camps. People at some agencies said the move was to force the refugees to leave the camps and return to their homes — most of which are destroyed or uninhabitable. Others said the Haitian minister for planning, Jean Max Bellerive, who is also the prime minister, complained that the free food was undermining Haiti’s farmers and merchants. Street sales of food here are a large factor in the domestic economy.

“How do these people go back home and go back to their lives?” said Karl Jean Louis, executive director of Haiti Aid Watchdog, a monitoring project based in Port-au-Prince. Mr. Louis said the Haitian government has not offered a coherent plan. At the same time, efforts to elect a new president, the official head of state here, have run into a deadlock after November elections produced no clear winner and cries of vote fraud.

Mr. Louis said the slow spending by relief agencies augurs poorly for a reconstruction that has only now begun.

“We all know the money will stop really soon,” he said. “Where is the plan? That is what the government has to answer.”