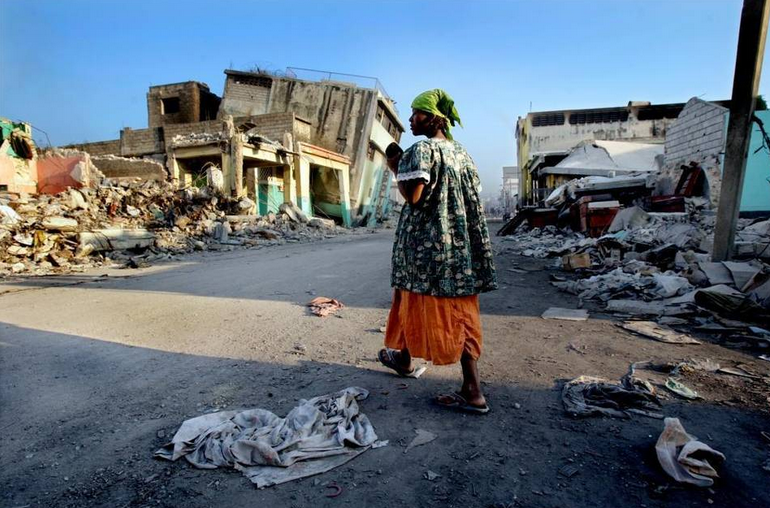 As Haiti remembered the country’s tragic earthquake seven years ago with prayers and songs, Haitians in South Florida also did the same Thursday.

The more than 300,000 people killed in the Jan. 12, 2010, earthquake were remembered with candlelight vigils as South Florida joined Haiti in commemorating the disaster.

In less than a minute, as many as 300,00 people were dead – buried beneath a pile of rubble from the Western Hemisphere’s most devastating natural disaster. Nou Bouke: Haiti’s Past, Present and Future, is an hour-long documentary produced by The Miami Her

Both the cities of Miami and Miramar hosted observances. A silent procession Thursday afternoon began at the Toussaint Louverture monument on Northwest 62nd Street and North Miami Avenue in Miami. Led by Fanm Ayisyen nan Miyami/Haitian Women of Miami, the annual procession featured Haitian Americans and school children silently walking while carrying signs and the Haitian flag as they wound their way from the monument to the Little Haiti Cultural Center.

“We want to send a strong message to the people of Haiti, our brothers and sisters. We did not forget. We will never forget,” said Marleine Bastien, the head of Fanm Ayisyen nan Miyami/Haitian Women of Miami.

At the center, renowned Haitian-American author Edwidge Danticat dedicated a memorial wall in honor of those killed during the quake’s 35 seconds.

“We would need never-ending walls to write all of the names,” Danticat said during the ceremony. “We are here remembering the faces, the smiles, the hopes, the dreams of each and every one of those who died seven years ago and what they meant to those who loved them.”

Danticat, who lost family and friends in the devastation, said the memories always hit her on the anniversary “that so many people were alive that morning and then they were dead.”

Edwidge Danticat recites her poem “Dawn” that she wrote for Earthquake victims of 2010 on Thurs., Jan. 12, 2017. A permanent memorial as been placed inside the Little Haiti Cultural Center to remember the victims of Haiti Earthquake 2010.

Her words, echoing the past and looking into the future, from her 2004 novel The Dew Breaker, will grace the memorial wall in Creole:

“I once heard an elder say that we will have three deaths: the one when our breath leaves our bodies to rejoin the air/ the one where we are put back in the earth/ and the one that will erase us completely, when no one remembers us at all/ Our eyes were witnesses./ And now our hearts are your memorial./ We will always remember you.”

Following Danticat’s dedication, an inter-faith prayer and memorial service led by the Florida Haitian American Christian Leaders Association took place. The vigil closed with a traditional bouillon, a soup made with vegetables and meat.

Earlier in the day, South Florida Republican Rep. Ileana Ros-Lehtinen acknowledged the quake’s anniversary in a speech on the House floor. She called on lawmakers to “continue to help Haiti and the Haitian people.”

“Haitians have been resilient in their efforts to come back from this massive disaster, and the United States will remain committed to helping Haiti get back on its feet,” Ros-Lehtinen said.

As Ros-Lehtinen was speaking, in Haiti, the country’s interim government was paying its own respects. Joined by government officials, interim Haitian President Jocelerme Privert placed a large arrangement of white zinnias and daisies at the unfinished memorial on the barren hillside where most of the dead are buried in unmarked mass graves. The earthquake also injured 300,000 and left 1.5 million homeless. Even today, there are 46,691 people living in makeshift communities after being displaced by the disaster.

A ceremony was also held in the city of Miramar, where a 6 p.m. candlelight vigil took place at Miramar Regional Park, 16801 Miramar Pkwy. The free Miramar event was hosted by 99 Jamz DJ Supa Cindy and spoken word poet Mecca aka Grimo, both of Haitian descent.

It included a concert featuring Haitian konpa musicians Harmonik and Richie of the band KLASS, and gospel music artists Born 2 Serve and Inger Hanna. Attendees were encouraged to bring donated items as part of the city of Miramar’s ongoing Haiti Relief effort following Hurricane Matthew, which hit Haiti on Oct. 4.