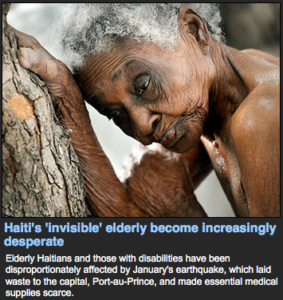 PORT-AU-PRINCE, HAITI — It was always hard to be old in Haiti, but after the earthquake, to be old and poor feels like a curse, say those who are both.

“We struggle to maintain a little dignity, but look at us,” said Lauranise Gedeon, who sat, embarrassed, in soiled sheets in the ruins of the municipal nursing home here in the capital.

Residents are bathed outdoors with a bucket and try to cover their nakedness. They spend the long, hot afternoons in hospital beds lined up side by side, six to a tent, fanning themselves with pieces of cardboard. They beg for water to drink.

“No water today. We are waiting. We are waiting for medicines, for the doctors, for God to help us,” said nurse Yolette François. “I am serious. These old people have a lot of troubles.”

Her patients, about 80 men and women, were scooping rice and beans from dented metal bowls. Asked what they needed most, one resident said, “Something for the flies.” Another complained that her spoon had been stolen and held up her fingers, sticky with food. “Look!”

The nurse whispered, “We have run out of diapers for them.”

In Haitian Creole, the old are called “gran moun,” and they are relatively few. Those 65 and older make up just 3.4 percent of Haiti’s population, compared with 13 percent in a developed country such as the United States, because to attain such seniority in a nation beset by high infant mortality, poverty and disease is an accomplishment.

But in the weeks after the catastrophic Jan. 12 earthquake, the elderly appear to have been forgotten.

“They are invisible, and we need to do more to help, because they are desperate,” said Ronald Blain, a Haitian government official working for the U.N. Human Settlements Program.

This week, a working group of U.N. experts has been created to look into the situation of Haitians with disabilities, especially the elderly, who have been disproportionately affected by the disaster.

In a statement, the chairman of the U.N. committee, Mohammed al-Tarawneh, said that “while relief workers are struggling to provide aid to the people of Haiti and while the situation remains difficult for everyone, persons with disabilities are particularly affected by the crisis,” especially those whose caregivers were killed or injured.

The elderly hobble through the daily chaos of Port-au-Prince, forced into rubble piles by speeding convoys of aid workers in their big white SUVs. There are few sidewalks now, and no ramps, no rails. To use tap-taps, the ubiquitous public transport that is a pickup truck with a bench in the bed, the old are lifted like luggage.

With a cane and a sack, Pierre Louis Pierre crossed a busy road near the airport, helped by a random younger man who had watched as Pierre tried, repeatedly, to make his way. Pierre said he is not certain of his exact age, as most births and deaths in Haiti are not recorded. “I am old!” he said and opened his mouth wide to show missing teeth. Where does he sleep? He pointed at the ground. “On the earth,” he said. In a tent? “When they let me in,” he said.

Old women sometimes appear in the food lines, but since the wait for the heavy sacks of donated rations — what Haitians call “disaster rice” — can be five or six hours, the frail ones cannot compete with the younger, stronger and just as hungry.

Most elderly Haitians live with family or with caretakers who are paid a few dollars a day by faraway relatives in Miami or New York or Montreal to care for a grandmother or elderly uncle in a back room. The earthquake killed at least 220,000 people in all, according to the Haitian government estimates, and especially disrupted the tissue-thin safety net that protected the elderly.

“They don’t really have retirement homes. They are being taken care of by families, and those without families have neighbors or their church. Sometimes they go to the nuns and sometimes the government,” said Cynthia Powell of the London-based group HelpAge International, which has begun to deliver food and medical care to a municipal nursing home here and pay workers’ salaries.

Before the earthquake, the city-run nursing home was not too bad; there were men’s and women’s wings, an administration building and a wall that protected a garden. The women’s unit was destroyed, and four patients died on that day, and three more later. In the days right after the disaster, the residents slept on the ground, surrounded by rats. Now they sleep five or six to a tent, among clouds of mosquitoes. The ground floods when it rains. A few elderly women have moved back into the hallways of the men’s unit, which is still standing, but the edges of the darkened hallways are filthy, littered with excrement and used condoms.

After the earthquake, with no security to stop them, refugees swarmed into the garden compound, where they have now established a rough camp of several hundred people. The elderly have some protections, but not many. “The walls fell down, so people come and go as they like,” said Nickson Plantin, a security guard. “It is my personal opinion that if you want to give one of these old people something, you put it in their hand — and don’t give too much.” The neighborhood is surrounded by gangs.

Food in the early days came from the charity World Vision, but the soy-enriched bulgur wheat was hard for the elderly residents to digest. So the cooks now buy food at local markets.

Clervana Mondesir said proudly that she is 87 years old. “I’ve seen a lot,” she said. “In 13 years, I will be a hundred.” Mondesir said she came to the nursing home a few years ago, when she became confused and despondent after the death of her daughter, who was pregnant and allegedly beaten by her husband. “She fell down and died,” she said.

Mondesir said she has two sons who visit. She said that when the earthquake struck, she hid under her bed. “They were surprised when I came out alive,” she said. Her worldly possessions are now in a pillow case. Asked whether she needed anything, Mondesir said some milk and malta, a rich carbonated nonalcoholic drink made of barley and hops.

“Look at us. We’re getting skinny and weak,” she said, pulling at her arm muscles, “and now you need to be strong to survive.”