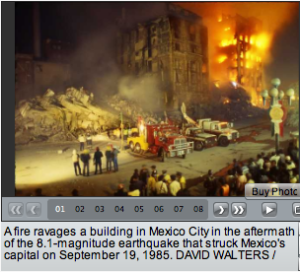 Though Mexico’s government botched its initial response to the 1985 earthquakes, it found the right formula to build and repair tens of thousands of homes.

MEXICO CITY — The devastating 1985 earthquakes delivered Felipe Lembrino a mixed blessing: one year living in a squalid makeshift camp for the displaced, but also a new home built on government-granted land, financed by the Red Cross, constructed with his own calloused hands.

But it was not until Mexicans like Lembrino launched large protests against ineffective government — barrio por barrio, neighborhood by neighborhood — that they were assured permanent housing.

“The people of Haiti, they need to get together — not everyone for himself, like we’re seeing on television,” Lembrino, 64, said of early images of Haitians fighting each other at aid distribution centers following last month’s quake.

Spurred by the social unrest following the quakes, the Mexican government, aid groups and activists built or rehabilitated nearly 100,000 housing units in the capital in less than two years — an achievement widely considered a success that could serve as a model for quake-torn Haiti.

Keys to the effort: Reconstruction was coordinated by a single government agency created just for that task. Thousands of temporary tin shacks were erected on side streets, allowing residents to stay close to home and help rebuild their residences. And the federal government doled out contracts to a wide array of Mexican architects and builders who concentrated on particular neighborhoods, not the entire quake zone.

Residents like Lembrino even got to help choose the colors of their new apartment buildings. He picked mango and scarlet, with powder blue interior walls.

“Everyone felt like they were part of a greater mission,” said Manuel Camacho Solis, who headed the government agency created to lead the rebuilding.

In today’s Mexico City, evidence of the 1985 quakes — which ravaged the central historic district — is barely visible in the bustling metropolis of 20 million.

Tour buses pass by the Cathedral, National Palace and the Zócalo plaza, the center of the ancient Aztec capital where this year Mexico will celebrate its bicentennial with a raucous celebration. On Regina Street, fabric, sewing machine repair and book shops rebuilt after the quake hum throughout the day, next to trendy eateries blaring techno music.

Twenty-five years ago, the same street was littered with concrete and bloodied bodies.

More than 3,000 buildings — factories, apartment complexes, hospitals — toppled or suffered major damage. It was a relatively small slice of the larger metropolitan area, compared with the widespread devastation in Port-au-Prince.

A series of aftershocks culminated in a 7.5-magnitude quake one day later. An estimated 10,000 people died — paling in comparison to the 200,000-plus believed to have perished in Haiti last month.

Many low-rise old brick colonial buildings survived, while newer high-rises collapsed, including the 12-story Hospital Juárez tower. Hundreds of doctors, nurses and patients perished, victims of inadequate building codes that have since been strengthened to protect against stronger earthquakes.

But within a week, thousands of the displaced were marching to protest the government’s clumsy response, refusing to leave their devastated homes and demanding new housing.

They were dubbed los damnificados, the “victims.”

“Our strategy was always to be in the street. It was a chance to revitalize our democracy and to better our community,” said Francisco Javier Saucedo Pérez, a former leader with the Assembly of Neighborhoods of Mexico City who was studying for the priesthood at the time.

Faced with mounting social unrest, de la Madrid fired his urban affairs secretary and replaced him with the savvy and visible Camacho Solis, then a deputy with Mexico’s State Department. He oversaw the new Popular Housing Renovation agency, which had a two-year mandate to fix the housing crisis.

Similar moves, Mexican political observers say, would benefit Haiti, whose president, René Préval, operates in a low-key style and whose government is considered far weaker than Mexico’s Institutional Revolutionary Party (PRI), which in 1985 had been in power for generations.

Haiti’s reconstruction czar ideally “would be someone from the country who doesn’t hold political ambitions,” said Manuel Perlo Cohen, an economist with the National Autonomous University of Mexico who worked on his country’s reconstruction.

In neighborhoods named Tepito, Doctores and Roma, Camacho Solis drew kudos for sponsoring meetings between government and activists and partnering with nongovernmental agencies, hammering out commitments from them.

In Colonia Guerrero, neighbors formed Campamentos Unidos, a group of about 300 families who marched to the Zócalo, Mexico City’s main plaza, for their cause and conducted a mini-census, registering residents and gauging their needs.

“Knowing the kind of funds that are rolling into Haiti today, just imagine for a minute if someone organizes them on the ground and empowers them to do their own reconstruction,” she said.

The groups were adamant about remaining in their neighborhoods. Likewise, in Haiti, talk of establishing temporary camps outside the capital has sparked fierce criticism from residents and experts who say jobs and services would be too far away, and that the ad-hoc housing would turn into permanent slums.

“It would generate a social crisis. People will get mad. They don’t want to be taken out of their homes, their lands,” Camacho Solis predicted if Haitians are relocated en masse outside Port-au-Prince.

In Colonia Guerrero, like across Mexico City, the government moved families such as the Lembrinos into street-side encampments near their old homes.

They lived in tin shacks that had electricity, sharing space with scorpions and rats from a nearby subway tunnel for almost one year. Bathrooms and kitchens were shared, possessions fiercely guarded.

“If you left your soap or towel in the bathroom, other people would take it,” Lembrino remembered.

Most importantly, families helped design and build their own apartments.

Lembrino’s wife, Flavia, learned to mix cement while her husband — a carpenter by trade — pitched in the hard labor. Student architects from the National Autonomous University of Mexico drew up the plans.

“We had hardly any machinery — we did it all by hand,” Lembrino said.

Eight families moved into the tenement on Zarco Street, which like many of the post-quake housing complexes are low-rise, U-shaped and feature a common courtyard with a large Virgen de Guadalupe altar. Seven of the original families live there today.

“There is nothing better for mental health than being given the tools to dig themselves out,” she said.

While the government did not directly build Lembrino’s home, it did provide the land. In all, the government expropriated nearly 6,000 damaged residential properties, many of which had already fallen into disrepair under absentee landlords who hadn’t made money for years because of long-standing rent control laws.

Similar action will be a huge challenge in Haiti, where private land ownership is sacred but was difficult to establish even before the quake, and which has cumbersome and rarely used eminent domain laws.

After the quake, Mexico’s Popular Housing Renovation agency created generic plans calling for two-bedroom apartments of about 430 square feet. It handed out contracts to architects and builders across Mexico City and gave them creative control.

Mary Comerio, an architecture professor at the University of California at Berkley and an expert in post-disaster construction, hailed the Mexican model as an example for Haiti, even if nongovernmental agencies have to pick up the slack because of the lack of builders on the island.

Mexico’s program “was a very interesting economic stimulus. It distributed the work, it didn’t centralize it,” said Comerio, who is serving as a U.N. advisor on Haiti. “What we can learn from Mexico is to spread the work around. All the hundreds of NGOs divvying up the work, all the architects and engineers responsible for one block here, this block there.”

In the end, for many families, the reconstruction provided upgraded housing and gave them the unlikely opportunity for home ownership.

Renters like Socorro Herrera Centena, 62, spent a year living with her four children in a temporary camp near the Zócalo after her home was damaged beyond repair. Before the quake, she had paid 5,000 pesos a month in rent, then equivalent to about $5.50.

The government built a new 12-family complex on Regina Street and allowed Herrera Centena and her neighbors to buy units. Her monthly payments doubled, but with a $2,000 loan from a family friend, she paid off the mortgage.

“Really, it does make you feel wonderful,” she said of owning her home.

The World Bank floated a $400 million loan to the government to help with housing. Nonprofit agencies, in partnership with the government, built or rehabbed about 7,000 housing units. The Mexican government built or fixed the rest: nearly 88,000 units.

Mexico also set up a $100 million national fund with public and private donations that went primarily toward rebuilding 18 public schools, a dozen public buildings and 11 hospitals.

Still, the reconstruction effort was not perfect.

While nearly all of the temporary camps have long turned into parking lots or new buildings, vacated shacks in the gritty Tepito neighborhood were taken over by drug dealers and thieves, residents say.

Another camp in the Roma neighborhood, hidden away next to a Catholic church, still houses eight families who were given help but never permanent housing.

They include Alejandra Pacheco Hernandez, 60, who lives with her adult son and his daughter inside a 13-by-13-foot tin shack stuffed with a bunk bed and a flat-screen television. They have electricity but no running water.

Yet, as Mexico City gears up to mark the 25th anniversary of the quakes, people here mostly laud the success of the reconstruction — and celebrate the spirit that spurred their self-help and grass-roots activism.

Celso Garcia, 60, embodies that attitude. He lost his wife and 4-year-old daughter when their apartment building collapsed. Buried in rubble for three days, doctors had to amputate both his legs above the knee. Determined to get help, he convinced U.S. Embassy officials to send him for rehabilitation at Sunrise Regional Medical Center in Broward County.

Garcia returned home fitted with prosthetic legs, resumed his career as a school teacher and remarried. Now retired, he still lives in an apartment complex financed after the quake by the international Rotary Club.

Garcia advises Haitians to be aggressive about demanding help.

“They have to help themselves. No one is going to fight for them,” he said. “If I hadn’t gone to the embassy, who knows what would have happened to me.”