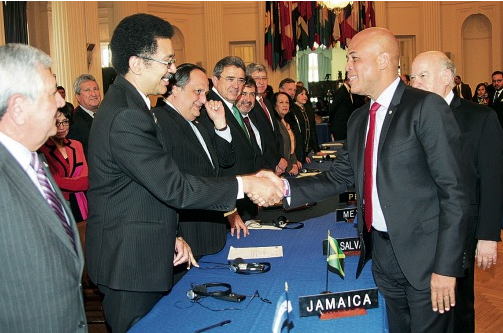 Haitian President Martelly (second right) greets Jamaica’s Ambassador to the United States Stephen Vasciannie at a special session of the Organisation of American States (OAS) on February 7. Looking on are OAS Secretary General Jose Miguel Insulza (right) and other ambassadors to the OAS.

HAITIAN President Michel Martelly last Friday told a special session of the Organisation of American States (OAS) Permanent Council that his administration has devoted 14 per cent of its national budget to promote universal education.

According to President Martelly, the Haitian Government held the view that education is the linchpin of the development process.

President Martelly also presented a review of developments relating to the rule of law, environmental protection, and the economy in Haiti.

Concerning the economy, he noted that Haiti was promoting foreign investment as part of its growth strategy, and saw important prospects in areas such as agriculture and textiles, among other things.

“I would like to thank the countries that joined forces to look for a solution, respectful of human rights, to this problem. For now, a process of dialogue is underway between Haiti and the Dominican Republic,” he said.

“In the context of these negotiations, the Dominican Republic has adopted a series of commitments that should allow us to find a successful solution, something we firmly desire. I invite all the countries of the OAS to continue supporting this process and to maintain the same vigilance concerning human rights, so that there is not a single stateless person in the region,” Martelly said.

The OAS, Caricom, the United States and a number of human rights lobby groups have condemned the constitutional court ruling, made in September last year, that will render stateless an estimated 200,000 people, the majority of whom are of Haitian descent.

The court ruling defines persons who have entered the Dominican Republic since 1929, and their children born there, as “in transit” and, therefore, requires them to obtain nationality.

On Friday, President Martelly thanked the OAS for its support relating to this issue, and expressed the hope that the negotiations would be met with success.