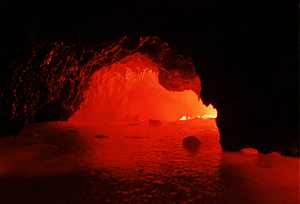 GAINESVILLE, Fla. — Earthquakes and volcanoes are known for their ability to transform Earth’s surface, but new research in the Caribbean has found they can also move ancient Earth rock foundations more than 1,000 miles.

Two University of Florida geologists are part of a team that found lavas on the Caribbean island of Hispaniola – home to Haiti and the Dominican Republic — that suggest the area is underlain by rocks almost a billion years older than previously believed. Until now geologists thought Hispaniola was relatively young from a geological perspective and rocks there should be no older than the Jurassic period, around 150 million to 160 million years ago.

An article published Sunday on the Nature Geoscience website reports the team found that unusual lavas resulting from relatively recent volcanic activity had occurred in the region of the same fault system that caused the January 2010 earthquake in Haiti. The existence of this volcanic activity, which probably occurred less than 1 million years ago, is unexpected as it postdates the previously known active volcanism in this part of the Caribbean by at least 40 million years, said Michael R. Perfit, a professor and chairman of UF’s department of geological sciences.

The most surprising discovery came from chemical analyses of the lavas which were found to have compositions similar to lavas found inside stable interior parts of continents. A detailed examination of the chemical data suggests that the source for these lavas is derived from mantle rock that originated at least 1,000 miles away.

“We can use the trace element and isotope information recorded in lavas and other environmental samples as sort of ‘inorganic DNA’ to trace their origin, migratory pathways and age,” said George D. Kamenov, a UF associate in geology. The department’s state-of-the-art plasma mass spectrometer was used to measure precisely the abundances of lead, strontium and neodymium isotopes in the lavas.

The team of geologists found the ratios of these isotopes did not match any rock substrate found nearby or anywhere else on the Caribbean islands. Instead the isotope ratios matched billion year old rocks like those existing in Central and South America today. These crustal fragments are likely surviving portions of an ancient supercontinent known as Gondwana. By contrast, lavas found in island arcs such as the Greater Antilles are formed by oceanic plates being thrust under other oceanic plates or continents similar to what is currently happening around the so called “Ring of Fire” around the Pacific Ocean.

Perfit said the findings suggest that as the Caribbean tectonic plate moved between North and South America it captured a rifted piece of ancient continent that had formed the foundation of Central America. Subsequently this fragment migrated eastward, likely for more than 1,000 miles, to its current position in Hispaniola. This implies that continental material can be transported in the upper mantle for thousands of miles and survive more or less intact for billions of years with such fragments serving as “cores” around which islands and eventually continents can grow.

The research suggests the possibility that the fault system in the region can be “leaky” and can be a place where volcanic activity occurs. Although it is uncommon, sometimes major transform faults (called leaky transform faults) penetrating tens of miles into the Earth’s crust serve as conduits for magma to reach the surface. One example of this is the southernmost boundary of the San Andreas Fault in the area of the Salton Sea in Southern California.

“In addition to earthquakes in such fault zones you may get volcanic activity, but we can’t use this to predict earthquakes or say there will be a volcano in Haiti in the near future,” Kamenov said. “Although the volcanism we found occurred only a million years ago, we can’t say if it will happen again or not. In addition, there are known hot springs and travertine deposits east of these volcanoes indicating that the geothermal activity continues today.”