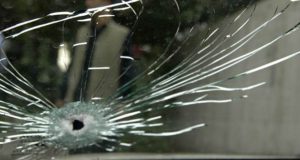 PORT-AU-PRINCE, Haiti — Gunmen shot up and robbed a bus carrying journalists covering the campaign of Jacques Alexis, a  presidential candidate with 2% popularity in a recent poll, killing the driver and injuring a reporter, police said Tuesday.

The bus was carrying seven Haitian journalists to a campaign stop by candidate Jacques Edouard Alexis, an ousted former vice president who is considered a front-runner in the Nov. 28 election.

Haitian National Television reporter Richardson Jordan told The Associated Press that the driver, an off-duty police officer with the prisons department, tried to rush past men armed with pistols, machetes and a homemade gun.

Jordan said the men opened fire and killed the driver with a shot to the head. The bus flipped, injuring one of the journalists, and the bandits rushed in to take money and a laptop computer.

Lerebours said police tracked down the suspects on Monday night, killing one in a firefight and arresting three. They were taken to a police station in Gonaives.