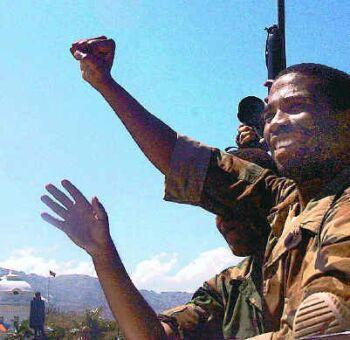 by Kevin Pina
Port au Prince, Haiti – HIP — Haitian activists in Port au Prince are accusing the Obama administration of turning a blind-eye to the political activities of alleged criminal bosses in Haiti while backing a ruling to exclude the widely popular Fanmi Lavalas party. The party of ousted president Jean-Bertrand Aristide, known as Fanmi Lavalas, was barred by current Haitian president Rene Preval’s handpicked election council from participating in parliamentary elections scheduled for Feb. 2010.
The accusations made against the Obama administration by community leaders in Haiti stems from a recent meeting of the Front for National Reconstruction (FRN) held at the Hotel Olofson in downtown Port au Prince on Dec. 19. The FRN gathering of former paramilitary commanders who helped oust former president Jean-Bertrand Aristide in a bloody takeover in 2004 was officiated by their party leader Guy Philippe. He was indicted on Nov. 22, 2005 for conspiring to import cocaine into the United States and money laundering. Lawyers contacted in Miami confirmed that the indictment is still open and that Philippe remains on a wanted list of the Drug Enforcement Agency (DEA) of the United States.
Philippe escaped from a high-profile DEA raid that was supported by the Haitian government in July 2007. According to the Miami Herald, “The raid’s failure angered Haitian President René Préval, who had to work hard to persuade his minister of justice to allow the U.S. agents to capture Philippe and other drug suspects on Haitian territory, according to well-informed U.S. and foreign officials who asked for anonymity because they were not authorized to speak on the record about the case.”
The DEA raid was launched after Philippe revealed on a local Haitian radio station that Andre Apaid and members of his Group 184 had provided funding to paramilitary forces in the neighboring Dominican Republic to oust Aristide. The Group 184 led the opposition movement to Aristide and mounted an international public relations campaign seeking his resignation. Apaid and the Group 184 claimed that they were a peaceful civil society organization with no relationship to Philippe as his forces entered Haiti on a killing spree of Lavalas supporters in early Feb. 2004. During a broadcast on radio Signal FM, Philippe claimed that the Group 184 and business leaders that included Apaid had sent money to buy arms and provided logistical support to their invasion from the Dominican Republic. Apaid owns Alpha Industries that is one of the largest garment assembly factories in Haiti. Secretary of State Hillary Clinton visited one of Apaid’s factories last April to tout his partnership with Canadian apparel giant Gildan Activewear as an example for economic development in Haiti.
A leader of one of the many community organizations affiliated with Aristide’s Fanmi Lavalas and who spoke on condition of anonymity stated, “It’s clear to us that Obama and Preval never really intended to arrest Philippe but only wanted to send him a message to shut his mouth. While Fanmi Lavalas has been barred from the next elections in 2010, Philippe’s party has been accepted to run by Preval’s election council. Now Philippe openly holds an FRN meeting in the capital…where’s the DEA? He’s right here if they really want him. Obama and Preval are hypocrites.”
While Fanmi Lavalas, which is still recognized as Haiti’s most popular political party is barred from participation in the upcoming parliamentary contest in Feb. 2010, Philippe’s Front for National Reconstruction was approved to run in the elections by Preval’s election council.
©2009 Haiti Information Project
The Haiti Information Project (HIP) is a non-profit alternative news service providing coverage and analysis of breaking developments in Haiti.
Winner of the CENSORED 2008 REAL NEWS AWARD for Outstanding Investigative Journalism
For further information about the Haiti Information Project (HIP) visit: http://www.teledyol.net/HIP/about.html Contact: HIP@teledyol.net 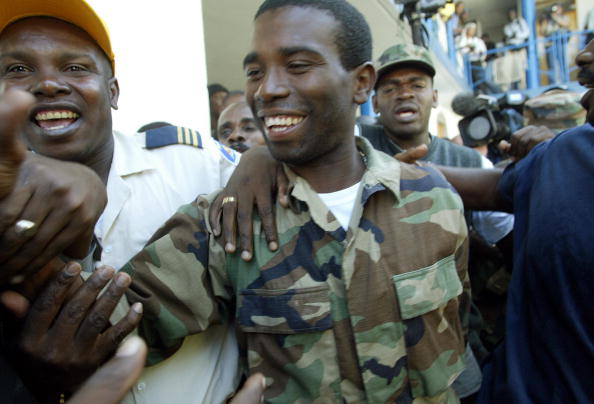 COMMENT BY HAITIAN-TRUTH.ORG ON ARTICLE FROM HAITI DISINFORMATION PROJECT
The high profile raid of 2007 was not authorized by the Minister of Justice even as he was pressured by President Preval. The raid was illegal and saw Guy Philippe’s wife and children roughed up in the action. She is an American citizen and filed a complaint  with the embassy. The DEA had authorization to arrest individuals in Miragoane and Gonaives.

The removal of Aristide was not bloody as the people welcomed Guy Philippe and his band. One police officer was shot when he attacked  Guy’s men. This particular police officer had killed a number of people in the community over the previous months. Had he not opened fire, he would have walked away like his associates.
Perhaps Mr. Pina can name a dozen confirmed killed in the removal of Aristide? Perhaps not.`

It is criminal to see Preval bar Lavalas from the electoral process.  This is a major force in today’s political climate. Everyone should be allowed to win or lose, as the case may be. But, there is method in Preval’s  madness. He is trying to create a situation in which Lavalas will react in such a way as to create a situation justifying Preval’s cancellation of the vote.

I believe that Guy Philippe has offered to take a polygraph as to his involvement with the cocaine business. He maintains his innocence. To date the United States Government has not accepted the offer. Perhaps they are playing their favorite game. Arrest someone in the hope he will give up others in an effort to receive a short sentence, or no sentence at all.

After all, we saw Oriel Jean, a major cocaine player and Aristide enforcer charged with  only one count of money laundering and released after a few months in jail. He gave up a load of people who were arrested later in a daisy-chain of betrayal.  Faurel Celestin,  a major operator  in the cocaine business, and reputed to have killed a few people along the way,  was incarcerated in Butner Federal Correctional Complex in Butner, North Carolina,  with loads of time to read in the  big library, wander around the manicured lawns, play table tennis, basketball and load of other games or watch a wide-screen TV. There was one hardship – no swimming pool.  After five years in this hotel he is back in Haiti, having given up names of everyone except his mother, while retaining his possessions.

An indictment, by the American Government  is definitely not a guarantee that any sort of crime has taken place.  There is truth in the ‘oft quoted statement…”We can indict a ham sandwich.” There are definite political overtones to the Guy Philippe question.

Let’s see the Americans deal with the Guy Philippe problem in Haiti.  Bring a recognized  non-partisan polygraph specialist like Maddox from Georgia to Haiti for a balanced test.