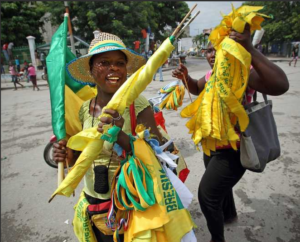 PORT-AU-PRINCE — It was Rio for a day, this shattered city.

Brazilian flags hung from the windows of broken buildings. Sidewalk vendors along the ruins sold yellow scarves trimmed in green, and jerseys and pennants that professed allegiance to the beautiful game. Yellow and green soda bottles hung from lines stretched across the busiest roads.

Each time Brazil’s “Seleçao” scored Monday, wild cheers echoed across the rubble. Foutbol, at least for an afternoon, served as a temporary balm against the miseries of the dispossessed. It was as if Chile, which hardly challenged the dazzling artistry of the yellow jerseys, had sacrificed themselves to the cause of Haitian earthquake relief. For as long as Brazil survives the World Cup, soccer here is succor.

“Even if it does not help us forget, it helps us not to think about it,” said Clifford Caidor, 22, a student, though he has been exiled from classes since the tectonic plates shifted Jan. 12 and ripped this city apart. From 10 rows up in Sylvio Cator Soccer Stadium, Caidor watched Monday’s games on a giant double-sided television screen set in the middle of the pitch. Caidor, who has slept in the yard of his parents’ ruined house since the earthquake, wore the colors of Brazil’s team — Haiti’s very surrogates.

“When Brazil is playing, it’s just as if Haiti’s playing,” he said. “Brazil plays a beautiful game and it gives us feeling.”

A city benumbed by 300,000 deaths, still strewn with rubble and ruin, where recovery is regarded as a fading rumor, badly needs the feeling. The bon boul feeling, they call it here. 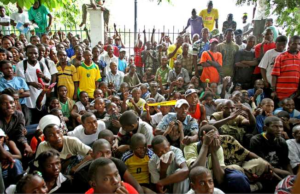 the narrow passages amid the teeming tarp and shanty settlements where a million or so earthquake refugees have congregated. Not exactly a soothing sound, that voice, yet the effect was nearly pharmaceutical. For a few hours Monday, during the two World Cup matches, the capital’s maddening traffic untangled. Every camp television, powered with pirated electricity, pulled a crowd. A kind of order, however fleeting, had come to the chaos of Port-au-Prince.

Amid the post-apocalyptic scene that has supplanted the once-beautiful Champs-de-Mars city park at the city center, entrepreneurs sold Haitian moonshine cut with fruit juice and sugar, or spices and tree bark. Fifteen cents (U.S.) a shot. To lubricate the celebration.

Not far from the park amphitheater, now clogged with jerry-rigged tents and corrugated metal shelters, with a bandshell marred with political graffiti, a cluster of men and women gathered around a 21-inch television, shaded by a piece of plywood. A few feet away, four small boys played soccer with a ball so torn and deflated it required a child’s imagination to relate the tattered bladder to soccer.

Brazil scored and women embraced. Children ran into street waving the Brazilian flag. It was Rio on the Champs-de-Mars. The game ended in a mighty chorus of blaring car horns and cheering across the city.

Not everyone loved Brazil. Most of the nonbelievers donned the baby-blue-and-white colors of Argentina, the other Haitian surrogate. Marlene Noel, a sidewalk vendor specializing, at least this week, in football scarves, said that for every one or two Argentina scarves she sells, Brazil fans grab five or six.

And there was the utter nonconformist Frantz Bertin, 37, garbed in a bright orange Dutch jersey, with matching socks. He watched the Netherlands prevail in the morning match, sipping from his half-pint of Bakara rum.

“This morning I chose to buy this rum instead of having a plate of food,” said the cabinet-maker, unemployed and exiled to the camps since the earthquake. Despite the rum, he was able to recall the names of each member of the 1988 Dutch team that won the European championship. “The World Cup cannot erase the pain but it can relieve the stress,” he said, taking one more drink from his own stress reliever.

Down the streets, graffiti celebrating Brazilian soccer has become as evident as the anti-government stuff. As if civil unrest had been put on hold. As long as the beautiful game survives.

Marcello Santos, a Brazilian military policeman patrolling the Champs-de-Mars in a blue United Nations helmet, a bullet-proof vest and his automatic rifle at the ready, said he was gratified to be in a city so festooned with his country’s colors.

But Santos knows the games will end and the camps will return to the stifling heat, unemployment, crime, the threat of hurricanes and the growing resentment against an ineffective government. “I’m worried,” he admitted.

The foutbol respite will end. The miseries will return, mean as ever.

“This is just recess,” said Clifford Caidor. “And then recess will be over.”

1 thought on “In Haiti, World Cup games a short respite from misery”