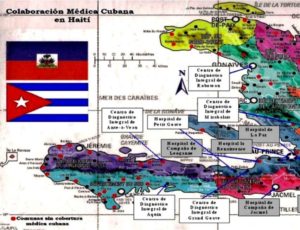 We didn’t have the necessary staff to reach the most isolated places of the territory and Cubans have made it possible to offer these health services, stated Duperval.

The Minister underlined how after the earthquake of January 12, 2010, these solidarity efforts increased and have continued under the presidency of Michel Martelly.

We have achieved a broader cooperation, which today includes projects like the Brazil-Cuba-Haiti and the Venezuela-Cuba-Haiti tripartite projects, she pointed out.

She also praised the island’s aid against the cholera epidemics tat his that country, as well as the implementation of an epidemiological surveillance system, based on Cuba’s efforts.

Duperval underlined, in particular, Cuba’s support in the field of rehabilitation, since after the earthquake there were many people with amputations and thanks to Cuba it was possible to provided these services throughout the country.