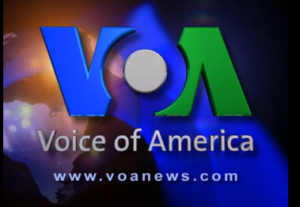 The United States’ most prominent public health agency is calling the cholera epidemic in Haiti “the worst cholera outbreak in recent history.”  The U.S. Centers for Disease Control and Prevention says cholera continues to spread across Haiti a year after it was first identified, despite better access to clean water.  This, as the United Nations faces a lawsuit for alleged unsanitary conditions at a U.N. base that may have introduced cholera into Haiti. Our reporter takes us to a cholera clinic in Haiti, just a few kilometers from where the cholera outbreak in Haiti is thought to have begun.

She stands in the morning heat, in pain and worry.  For her baby and herself.  “Susan” won’t give her real name because of the stigma of her disease.  She walked and rode motorcycles for six hours to arrive at this cholera treatment center.

“I was really worried this morning, especially when I was walking because I was really concerned I might lose the baby,” said ‘Susan’. ” So I knew I had to get here and see what result I had.”

Cholera can kill within hours by depleting body fluids through uncontrollable diarrhea and vomiting. Susan’s sister also has it. Doctors know exactly how cholera spreads.  Some Haitians don’t, like Susan’s mother.

The cause .. is contaminated water.

And a U.N. panel of experts has traced it back to Nepalese peacekeepers at this U.N. base.
The disease has sickened nearly half a million Haitians in the past year, and killed more than 6,500.  During the height of the rainy season, patients here were three to a bed.

Just down the road from the treatment center is the Latem River, where the first cases of cholera were reported.  It flows into the l’Artibonite River, the largest in Haiti, spreading the disease within days to rural areas with no access to clean water.”

Cate Oswald is with Partners in Health, the group that runs the center.  It and another organization, GHESKIO, want to begin a cholera vaccination pilot program in January.   But other groups argue a $900,000 price tag is too costly, and it would only reach 1 per cent of the population. Others worry the Haitian effort will deplete the global vaccine supply.

So, meantime, the centers train Haitians to treat drinking water with chlorine tablets and to practice good hygiene. But Dr. Jean William Pape with GHESKIO says those actions often do not continue at home.

Back at the treatment center, “Susan” feels her baby moving.  She will leave in a couple days to return to her home high up in these mountains. There, she has no access to indoor plumbing or latrines.